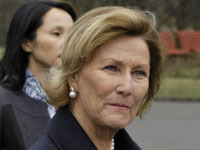 The fate of the Russian boy, who was taken away from his mother by Norway's child protection services, has attracted public attention. The child is currently staying in a foster home against his own will. Spokespeople for the Russian community in Norway wrote an open letter to the Norwegian authorities, to the Russian administration and to the Council of Europe with a request to interfere in the situation.

Pravda.Ru continues to watch the development of events in the family of Irina Bergseth (maiden name Frolova), a Norway-based Russian citizen. Norwegian child protection services have taken the woman's two sons away from her. Irina is now trying to have at least her elder son back, who holds Russian citizenship. The letter, written by the Russian community of Norway, is addressed to the head of the Russian government, the Queen of Norway and to the administration of the Scandinavian country. The authors of the letter ask the Russian and Norwegian authorities to bring the child protection services of Norway to justice. The services commit gross violations of human rights of the 13-year-old boy, who wants to live with his mother.

Read previous articles on the subject:

Russian boy becomes sex slave to his own father

Irina's son, Sasha, (full name Alexander Frolov) was forcefully taken away from his home by officers of child protection services of Norway (Barnevern) on May 31. The officers claimed that the boy could not stay with his mother because she was a mentally unstable individual. Five different medical assessment reports dismissed such a diagnosis (the examinations were conducted from in March-June 2011), but the officers simply ignored the reports.

The authors of the letter wrote that Irina Bergseth-Frolova is a very good mother. "Alexander has always been a good student at school. His various interests and talents, which he has shown during his studies, prove that the boy's mother is a highly responsible and positive parent. During the recent five years, the boy was doing tennis, he partook in skateboarding competitions, he played the piano, took part in concert programs and was fond of painting. In 2010, the watercolor drawing that the boy made became one of the winners of the regional UKM youth art contest. The young artist became a member of the Arts Academy in Oslo. His drawing was published in a local newspaper," the letter said.

Child protection services sent the boy to a foster family in Norway. In his new home, the boy suffers from the absence of communication with his relatives and friends. The child receives no proper care in the family either. For a whole month, the boy did not have a possibility of going to school (the school year in Norway lasts till June 20). He was not allowed to attend his sports classes, nor could he visit a dentist to have his braces replaced. Sasha says that both his case manager and the foster parents ignore his opinions and human rights. The child is certain that the Norwegian child protection services are working against him and his Russian family.

"This situation is extremely negative and dangerous to the Russian child. We are seriously concerned that the rights and opinions of this teenager are completely ignored by the Norwegian child protection services," the authors of the letter wrote.

In support of their words, they refer to the emails, which the boy sent to the Russian Embassy in Oslo. In the emails, the boy asked Russian diplomats to help him come back home to his mother as soon as possible. He gave a number of example to prove that it would be much better for him to live with his mother rather than with foster parents.

In addition, the authors of the letter reminded that Norway had a special law about children. The law stipulates that a child older than seven years of age has a full right to testify at court before the latter decides on his or her fate. Moreover, the law says that one should pay special attention to what a child says when they turn 12, because their opinions at this age are very important.

In case of Alexander Frolov, one can see gross violations of this law. The boy has repeatedly said that he wants to live with his mother, whom he dearly loves and respects. According to the authors of the letter, the Norwegian child protection services have committed gross violations of the rights of the 13-year-old Russian citizen. In particular, the services violated the following rights, guaranteed by the European Convention on Human Rights:

It is technically possible to try to win the case against the Norwegian child protection services at court. A local TV company has recently aired a report about a Norwegian boy, who had also been taken away from his home at age 13. The teenager managed to get a lawyer, and he won the case against the services. However, the boy lost 17 kilos during the trial. Does a child need to be in death-agony to defend his or her rights in Norway?