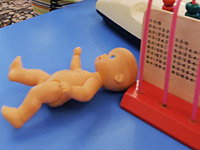 The terrible story of Irina Bergseth, who had her two children taken away from her by Norwegian child protection services has raised many questions. What should parents do if their children tell them that they had suffered from sex violence? Where should the parents go after such blood-chilling confessions from their child?

Read previous articles about the story of Irina Bergseth:

Russian boy becomes sex slave to his own father

Pravda.Ru's editor-in-chif Inna Novikova interviewed Olga Bykovtseva, a senior expert of the department of expertise of sexual conditions of the forensic expertise bureau of the Moscow government's healthcare department.

"What do you think about the story of Irina Bergseth?"

"Unfortunately, such stories take place on a regular basis. The number of sex crimes committed against very small children, from age two and older, is growing steadily. The most horrible thing about such crimes is when children suffer from their own parents."

"How do you conduct such expertise? What kind of evidence and which arguments do you normally use in the process?"

"There are certain rules that we have for the process. We start asking questions to a child or his or her parents who initiated the investigation. We question the child in parent's presence. If the victim is a girl, a female adult is supposed to be present - it can be her mother, grandmother, a female officer from child protection services. If the victim is a boy, a male adult must be present during the interrogation.

"The child answers our questions the way he or she can answer them, using their children's language. We only ask suggestive questions to them."

"To which extent the words and the story, which the child tells, may prove the fact of violence committed against the child?"

"The interrogation of a child is a part of the expertise. Afterwards, we conduct additional examination, and the results of this examination serve as evidence. We need to interrogate the child to understand the situation in which he or she had found themselves."

"But how can you understand that what the child is telling you is true? How can you distinguish truth from fiction in a child's story?"

"We send a child to a psychologist. There can be psychological expertise conducted, if there is such a necessity. It is the psychologist who decides whether the child is lying or not."

"So in the case of Irina Bergseth, the law-enforcement agencies of Norway committed monstrous violations. Irina had appointments with an independent psychologist for her younger son, who suffered from sex violence, and for her elder son, who was assaulted by his foster father. When Irina told Norwegian forensic experts about the work with the psychologist, she had her children taken away from her. Irina says that the services were concerned about the results of the therapy, because the psychologist realized that the children's stories were no fantasy. So, the first thing that you do is you communicate with a child. What do you do next?"

"We examine the child."

"How exactly do you examine the child? Irina says that this process is conducted under anasthesia in Norway."

"In Russia, there is no anasthesia for the procedure. At first we try to find traces of bodily harm on the body of a child - his or her face, mouth, chest, stomach, back and legs. We do not conduct ultrasound examination. We examine a child in a knee-elbow position, on a gynecological chair."

"Irina was saying that her son was beaten through a pillow, so that no bruises could be left on his body. There must be some traces left internally after such an assault."

"It takes longer for bruises to appear on children. Children's blood vessels are stronger. An adult individual may have a bruise if he or she just hits his arm or leg against something slightly. To leave a bruise on the body of a child, one has to hit the child hard.

"If a child suffered from a sex crime, there must be sperm or mucous left inside the body. Do you conduct any analyses to find such traces?

"We take a swab from the genitals of a woman or a girl during five days after the crime. This is the time period, when sperm cells are preserved in the vagina. If the crime was committed anally, and if a child defecated after the crime, there are not many chances to find sperm in the anus. But we conduct such analyses anyway.

"If the crime was committed a month ago, it is impossible to find any physical traces of it. As a rule, children keep silence about such crimes for a long time. When they finally have courage to talk about it, it is just too late, because there is no evidence to prove the fact of sexual abuse."

"But Irina doesn't want to make it up with the situation. How can she prove that the things, that her children are saying are true?"

"You see, when the story takes place in a foreign country, it is hard to say anything. If she were here in Russia, everything would be happening under our laws. A common medical specialist has no right to examine a child when it goes about a sex crime. Such examinations must be conducted by forensic experts."

"But she came to the institution, where they examine victims of sex crimes, and a surgeon there refused to examine the child. In her case, it was the specialist, who worked with such issues, but he refused, because Irina had no papers from police."

"So it means that they work on the same principles as here in Russia. If there are no documents from police, it is possible to help a child only if there is a real threat to the child's life."

"Irina is saying that her child complains of terrible pains in the anus. She asked doctors to examine the child, but they declined verbally, although she wanted to have those refusals in written form. She would like to know if there is a point to formulate the need for such an examination and where she could send such a document?"

"So it just so happens that the situation is hopeless. She can not bring the child to Russia, she can not go even to Sweden, a neighboring state, because such a move would mean that she would attempt to take the child out of Norway. She says that the father of her son would strip the boy naked and then, after abusing him sexually, he would dress him up in different clothes not to leave any traces on them. Afterwards, he would "clean" the boy from the inside with the help of some special device, something like a little vacuum cleaner. Have you had such experience when the people who commit crimes against children can be very cautious?"

"I haven't had that in my experience of 18 years."

"What does it mean - expertise of sexual conditions?"

"The department of sexual conditions is called so because beside rape expertise, we conduct expertise on genital injuries, which could occur as a result of the infliction of bodily harm or as a result of car accidents. We also have such patients as pregnant women, who suffered in car accidents, or pregnant women who suffered from sexual violence. We also work with those women who gave birth but then abandoned their children. We analyze incidents of termination of pregnancy and late miscarriages."

"Let's get back to Irina's story. She would like to ask you whether it could be possible to have her child examined for possible infection, because the child was subjected to gang-rape. The probability of infection is rather high. In Norway, she was told that there was no point in having such analyses conducted."

"We send all the patients that we work with to the sexual health clinic. We also recommend them have their blood tested for HIV."

"Is there a list of biochemical procedures for the children who fell victims to gang-rapes?

"No, we do not have that, there is no such expertise in the department. Biochemical expertise is a more advanced picture of blood, it requires examination of tissues."