Russian boy becomes sex slave to his own father in Norway 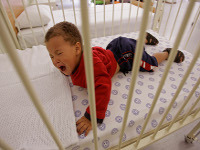 Irina Bergseth (Frolova), a Russian woman living in Norway, addressed Pravda.Ru in desperate search for help. Several months ago, the woman found out that her ex-husband, a Norwegian citizen, as well as his friends and relatives, had been raping their four-year-old son. The Norwegian authorities do not rush to help the boy claiming that the child's complaints were nothing but fantasies.

Irina married the man from Norway in 2005. The spouses, as well as Irina's seven-year-old son Alexander, settled in a small Norwegian town with the population of nearly 2,000. In the beginning of 2007, Irina delivered a boy, Misha. Irina's husband was married twice before, and had two children from his first marriage.

The Russian woman was concerned about the strange relations between her husband and his ex-wives. The latter would visit him regularly at his house. Even former mothers-in-law would often visit the man's new family. However, Irina just thought that it was a national tradition, so she kept quiet about it.

When Irina's mother came to visit her in Norway, she noticed that her husband was kissing his own daughter in a suspicious way. Irina did not pay much attention to her mother's remarks either. The woman recalled all that some time later, though.

The relations between the couple started to worsen after Misha's birth. Irina left her husband in the autumn of 2007. She said that her husband was treating the child badly. He could slap the child hard or push him; he was not gentle with Irina either.

Having left her husband's house, Irina and her sons moved to the crisis center for victims of domestic violence. According to local laws, before filing for divorce, the husband and wife are supposed to live separately for two years. In 2009, the couple divorced. The court decided, however, that Misha was supposed to see his father regularly. It was only several hours at first, but the authorities were extending the hours gradually. At the end of 2010, the father was allowed to take his son to his home for five days.

In the meantime, Irina was studying the language. She found a job and even bought a small apartment in the same town where her husband lived. The woman decided that one should not separate the children from their habitual environment, from their friends at school and in the kindergarten.

In February of 2010, Misha told his mother that his father had beaten him during their last meeting.

"The Norwegians know how to slap children not to leave traces. They beat Misha through a pillow on the stomach and on the head not to leave bruises," the woman said.

Having heard such news from her child, Irina went to the police. Several days later, her ex-husband came to the kindergarten and started threatening his own son saying that he would throw him on a highway so that many cars would run him over. The man promised to do the same to Irina and her first son, Alexander.

When the woman came to police and began to complain of the threats, she was told not to talk to her son about the beating. The police did not take any measures against Irina's ex-husband a month later, even though children's rights are very well protected in Norway.

Soon afterwards, the woman learned more details of how her ex-husband was spending time with his own son. The details were more than just shocking. The boy had calmed down a little by that time; he stopped being afraid of his father.

Misha said that his father had taken him to his daughter's - his daughter from the first marriage. Twelve people gathered in the house of the 22-year-old woman that weekend. Misha became an object for their sex games. Both men and women began to molest the child; the women were raping the boy with strap-ons.

The boy did share his horrific experience with his mother at once: he was extremely intimidated by his father.

Having heard the blood-chilling story, Irina rushed to social custody agencies. However, officials took the woman's sons away from her and said that she was insane. Misha and Sasha found themselves in an orphanage, whereas Irina was examined by psychiatrists. The latter did not find any deviances with the woman.

Irina received the certificate of her sanity on Monday, but she could pick up the children from the orphanage only on Monday. Several days later she learned the reason why.

Custody agencies separated the boys. According to Misha, on Friday he was taken to a "red building." The people in the building duct taped his mouth and beat him through a pillow again. The same day, the child fell victim to sexual violence again. There were several other children staying in the building with him. The youngest child, a girl, was not even two: she was a granddaughter of Irina's ex-husband.

Afterwards, Misha told his mother what the adults were doing to him in the red building. Using his childish language, the boy said that they made them wear costumes of animals with genitals pinned all over them. All of that was filmed on video and photographed. According to the woman, her former husband and his friends literally cleaned the children on the inside with the help of a device which worked as a vacuum cleaner. Moreover, they gave them vomit and diarrhea inducing medicines.

The boy was returned to the orphanage the next day. When Irina finally picked the kids up, Misha was begging her to take him as far away from that place as possible. "Mama, I will die, let's leave, I will die here," the boy was telling her.

Irina decided to go to the hospital alone, without any approval from the authorities. However, the surgeon refused to examine the child after he had heard the little boy's story.

Three months have passed since the time when Irina found out the shocking details of what was happening to her little son. However, nothing has changed. The woman is unable to do anything to protect her child. She can not even stop her ex-husband's visits to the boy. The Norwegian man, with the support of social custody services, claims that Misha has made everything up. As for Irina, the man says that she is just paranoid. It just so happens that Misha has become a sex slave of his own father. Irina knows the rapists' names, but she is unable to make the police work. The police do not even want to register the case as a sex crime.

Irina can not leave Norway. Misha does not have the documents for it: the father is supposed to sign those documents to let the mother take the child out of the country. The Russian embassy can not do anything to help the Russian citizen because there is no special agreement about children between Russia and Norway.

Thirteen years ago, a 12-year-old Norwegian girl claimed that she had been raped by her own parents. It seems that no one believed the girl either - her mother's friend was in charge of the case at social custody services. When the girl turned 16, she asked for help again, although to no avail again - no evidence was found. Nowadays, the girl is 25 years old. She has recently found a lawyer, a woman, who believed the story and agreed to help. Ten people found themselves on the dock. Irina has already met the lawyer in a hope that she would agree to take up Misha's case too.

The Russian woman says that she was shocked to find out that family incest in Norway was not rare at all.

"Families meet with each other and they exchange children. Children can be very small, they can be less than two years, but they still use infants in their barbaric entertainment. They do not even realize that it is abnormal. I could not even imagine that at first, and I can understand the people who don't believe those stories," Irina said.

To save her son, Irina is supposed to collect evidence against her former husband and his friends. The woman will need approximately 12,000 euros for that, which she is trying to collect. The woman also hopes that her story will receive extensive coverage in the media so that the Norwegian authorities will not be able to hush it all up again and say that her son has sick imagination.

"At first it seemed to me that it is a Norwegian tradition. Now I realize that not all Norwegians are like that. I just had bad luck. It's hard to reach good people. I am trying to reach Norwegian politicians and the press. But it is hard for a Russian woman to be heard in such a small kingdom," Irina said.