Russia's Defense Ministry has rejected the accusations from British Foreign Secretary Boris Johnson, who claimed that Moscow was involved in the September bombardment of the UN humanitarian convoy in Aleppo, Syria. Igor Konashenkov, an official representative of the Russian Defense Ministry, demanded  Johnson should back up his words with solid evidence. 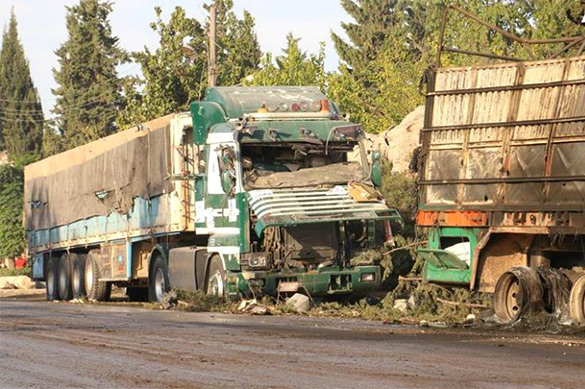 According to Konashenkov, the "Russophobic hysteria" of several members of the British establishment does not impress anyone in Russia much. The Russian general called Boris Johnson's statements 'a storm in a glass of muddy London water."

Bare accusations, no evidence, as usual

"Since September 20, we have seen three waves of accusations of Russia's alleged involvement in the destruction of the humanitarian convoy in Aleppo. Every time, the accusations come with cliches and references to eyewitnesses, who then prove to be Jabhat en-Nusra militants. The US intelligence then referred to some sort of "indisputable evidence" that General Dunford, Chairman of the Joint Chiefs of Staff, subsequently disavowed personally in Congress," Konashenkov said.

"Now, we have Boris Johnson playing the role of the reasoner on stage, who, being a month late,  found Russia guilty, having studied some publicly available satellite images. Mr. Johnson, can you make these images publicly available to someone else?" the Russian official said.

The Defense Ministry spokesman also said that the department knew the reason, for which the US administration was losing interest in the subject lately.

"There were no Russian warplanes in the area where the convoy was staying. This is a fact. All of your alleged evidence will not cost a pence, if someone else can access the source of your information," said Konashenkov.

Boris Johnson said during the parliamentary debate on Syria that there were publicly available satellite images that proved that the humanitarian convoy near Aleppo was attacked from the air, in the dark. According to Johnson, it was the Russian Air Force that bombed the convoy, because the troops of Syrian President Bashar Assad could not conduct air raids during hours of darkness.

The UN humanitarian convoy was bombed on the night of September 20, in the area to the north-west of Aleppo. According to the International Committee of the Red Cross, 18 trucks were destroyed in the raid, at least 20 civilians were killed, including the head of the Syrian Arab Red Crescent in Urum al-Kubra.

Official spokesman for Russian President Putin, Dmitry Peskov, said that the accusations against Russia of the bombing of the convoy near Aleppo were unfounded. Representatives for the Russian Defense Ministry also said that neither the Russian nor the Syrian aviation bombed the humanitarian convoy. In addition, officials with the Russian Defense Ministry said that a combat drone of the US-led international coalition was flying in the area, where the convoy was staying and then left the area in about 30 minutes after the incident.

Russian officials have repeatedly said that decisions on air strikes in Syria are made only after the detailed verification of intelligence information. Interestingly, all the previous accusations from the West about Russia's involvement in the bombings of civilian infrastructure and facilities have never received any confirmation.

Meanwhile, experts at the International Syrian Support Group called the attack on the humanitarian convoy of the UN and the Syrian Arab Red Crescent a well prepared provocation.

The head of the British diplomacy did not stop at accusing Russia and called to organize acts of protest outside the Russian embassy in London against Moscow's actions in Syria. I would certainly like to see demonstrations outside the Russian embassy. Where is the Stop the War Coalition at the moment?" Johnson said, speaking at the British Parliament.

Russian Foreign Ministry spokesman Maria Zakharova commented on Boris Johnson's speech: "It appears that Boris Johnson has moved from words to action and used the weapon that he threatened to Russia - shame. We feel really ashamed for him," Zakharova wrote on her Facebook page.

The Kremlin reminded London of the obligation to ensure security of diplomatic institutions.

London is obliged to ensure security of diplomatic missions in accordance with the Vienna Convention, officials spokesman for the Russian president, Dmitry Peskov, said commenting on the statement from the head of the British Foreign Office Boris Johnson, who called for protests near the Russian Embassy in London.

"Mr. Minister is well aware of the Vienna Convention and the obligations of the UK to be responsible for the security of Russian diplomatic institutions on its territory," said Peskov, Interfax reports.

Bombing funeral procession in Yemen is not a war crime

The wave of hysterical anti-Russian accusations was started in Washington, after US officials suggested punishing Russia and Syria for the war crimes in Aleppo. However, Washington has not showed an emotional reaction to the bombing of a funeral procession in Yemen by the aviation of the Arab coalition led by Saudi Arabia. The air raid on the funeral procession in Sana'a, Yemen, killed 213 people and wounded more than 500. The mayor of Sana'a was among the victims of the attack.

US Secretary of State John Kerry, when on the phone with second Saudi Crown Prince Muhammad bin Salman al-Saud and Saudi Foreign Minister only expressed "deep concerns" in connection with the airstrike and called for a "thorough investigation" of the tragedy. Kerry did not say anything about either "war crimes" or the "international tribunal" during the conversation.