France's Hollande would rather welcome fascists than meet Putin

French President Francois Hollande will have to take into account the state of affairs in Syria when making a decision about the meeting with Russian President Putin, French Foreign Minister, Jean-Marc Ayrault said. 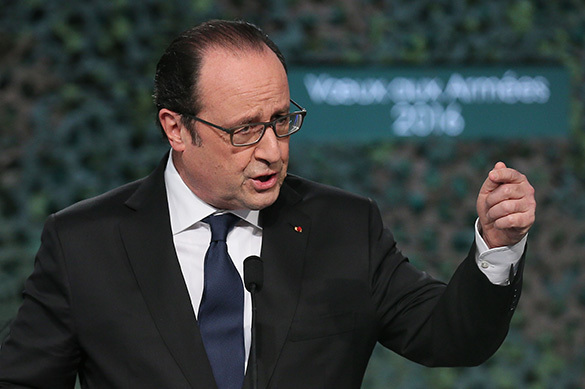 "If the French President decides to meet with the Russian president, the meeting will not be held to exchange courtesies, it will be held to tell the truth," Ayrault said, RIA Novosti reports.

The minister added that the decision about the meeting would be taken, given the situation in Aleppo and Syria.

As previously reported, Hollande announced his intention to personally tell Russian President Putin  about the inadmissibility to support the actions of the Syrian authorities in Aleppo. According to Hollande, the people of Aleppo have fallen victims of war crimes.

French President Francois Hollande, in an interview with TMC TV channel, asked himself a rhetorical question: "I ask myself whether the meeting would be useful. Would it be necessary? Would it add pressure? Can we make sure he stops what he is doing helping Syria's Assad regime by giving them air force support as they are bombing Aleppo?"

"If I welcome him, I will tell him that it's unacceptable, it's even damaging for Russia's image," Hollande said. "The population there today is a victim of war crimes and these acts will be judged," Hollande added.

The most recent statements from the French President clearly reflect the position of the United States. On October 7, US Secretary of State John Kerry stated that the actions of the governments of Syria and Russia should be investigated into as war crimes.

Hollande made France a cushion of the USA in Syria

Chairman of Pravda.Ru Board of Directors Vadim Gorshenin reflects on the mechanism that makes the French President release strange statements about Russia's "war crimes" in Syria.

"Hollande starts thinking about his future after his resignation that will take place in less than a year. Of course, he would want to read lectures for decent fees in the United States, as there is nothing that he can hope for in France given his unpopularity. To put it otherwise, Hollande, of course, would like to do what David Cameron does after his resignation.

Is there another explanation to the initiative from the French president to investigate "possible war crimes" in Syria? Incidentally, Hollande spoke only about Russia, but never about France or himself personally," Vadim Gorshenin wrote on his Facebook page.

According to pro-US leaders, there are plenty of terrorists in Aleppo, but there is no place for the troops of the legitimate Syrian government in the city, because Aleppo is an important strategic hub not only for Syria but also for the entire Middle East.

The United States, France, Germany, the UK, etc are staying in Syria illegally. They do not have a mandate from the UN for their presence there, nor do they have an official request for military assistance from the Syrian government. Therefore, the responsibility for the death of civilians of Aleppo should be laid on Obama, Merkel, Hollande and their henchmen, should it not?

Can France welcome fascism again as it did in WWII?

Russia remembers that France used to welcome Nazi fascists during WWII. Can France do it again? Both Hollande and Obama understand that they can go down in history of their nations as the leaders who legalized gay marriage and suffered a debacle in Syria. In Syria, Hollande made France a cushion for the United States.

To conceal failures in one's policies, one needs to shift the blame on someone else, and this is what Hollande is doing right now. I do not understand why Moscow continues preparing Putin's visit to France at the time when his French counterpart weighs all pros and cons of whether to welcome the guest or not."

On October 8, Russia blocked the UN Security Council resolution from France and Spain on a ceasefire in Syria's Aleppo. The resolution banned military flights over Aleppo. Venezuela also spoke against the resolution, while eleven countries voted for it with Angola and China abstaining.

The same day, the UN Security Council did not adopt a resolution on the situation in Aleppo. In response to Russia's veto for the Franco-Spanish draft document, Moscow's opponents refused to support Russia in support for the initiative for the withdrawal of militants from Aleppo's eastern neighborhoods, having thus ignored proposals from special envoy for the UN Secretary General,  Staffan de Mistura.

China's permanent representative to the UN Security Council, Liu Jieyi, expressed his disappointment about the fact that the Council did not approve of the Russian version of the resolution for Syria.