The summit of the Collective Security Treaty Organization (CSTO) finished in Dushanbe. President of Tajikistan Emomali Rahmon said that the situation in the region required urgent action to strengthen the military capacity of the Tajik border. All presidents of CSTO countries pointed out the expansion of the range of threats in connection with the Islamic State and the situation in Afghanistan. 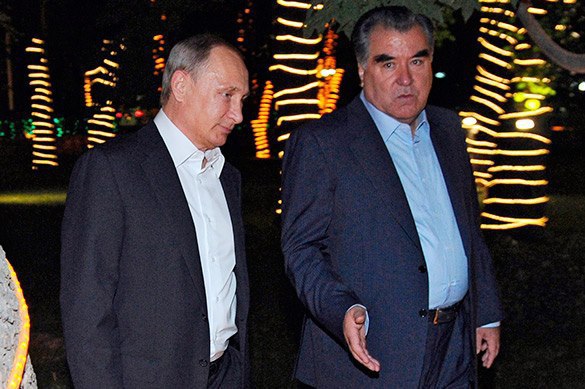 Russia is concerned about the current state of affairs in Afghanistan and the lack of results despite the presence of NATO in the country. "The danger of a terrorist threat from extremist groups penetrating into Afghanistan from neighboring countries has grown. Dushanbe can always count on the support of Russia," said Russian President Putin during the summit.

Kazakh President Nursultan Nazarbayev said that the Taliban has regained positions in Afghanistan after the United States had cut the number of military operations in the country.

CSTO member states need to increase bilateral contacts with Afghanistan in the field of prevention of extremism in the framework of international organizations, including the CSTO, said Kazakh President.

Thus, in addition to strengthening the position in Syria, Russia and its allies will soon start creating another strong point on the border with Afghanistan. Afghanistan has already asked Russia for assistance. The request came from first vice-president Abdul Rashid Dostum. The former president of Afghanistan believes that ISIS militants are planning a series of terrorist attacks in Afghanistan, Russia and Central Asia. In this connection, the official considered it necessary to ask Russia to provide military equipment to Afghanistan.

"At the CSTO summit, Putin offered to strengthen the military presence in Central Asia," Alexei Bychkov, chief of the department for projects of CIS members at the Institute of Political Studies, told Pravda.Ru.

"Russia's prime goal now is to push boundaries as far as possible, just like it was during WWI and WWII. In the near future, we can see the number of Russian army bases growing on the borders of Kazakhstan, Tajikistan and Kyrgyzstan. Tajik leader Emomali Rakhmon and other CSTO leaders are well aware that they can not handle the Islamic State alone," Alexei Bychkov said.

Tajik President Rahmon closed the moderate Islamic Revival Party just before the CSTO summit. He said that it was the Islamic State that orchestrated the recent attempted coup in the country. According to Rahmon, ISIS forces actively recruit volunteers in Afghanistan to enter the territory of Tajikistan.

In May of this year, CSTO country members tested the readiness of rapid deployment forces.

"The CSTO will focus primarily on security problems associated with the real threat of radical Islam," Alexander Krylov, an expert at the Institute of World Economy of International Relations told Pravda.Ru.

According to the expert, the CSTO and Russia are not likely to interfere in internal affairs of other countries, but CSTO will guarantee security from external threats.

As for the coalition with the West to struggle against Jihadists, "Washington has not made the conclusions from the mistakes that were made in the regions that the USA destabilized," said Alexander Krylov.

"If the West offers us cooperation for the stabilization of the situation, and the Americans adjust their policy in this direction, then there can be grounds for discussion. And if not, then why do we need it? " the expert said.