Putin: Russia supports and will support the Syrian government

Russian President Vladimir Putin said at the CSTO summit that the support of the legitimate government of Syria was in no way connected with the mass exodus of refugees from the war-torn country. 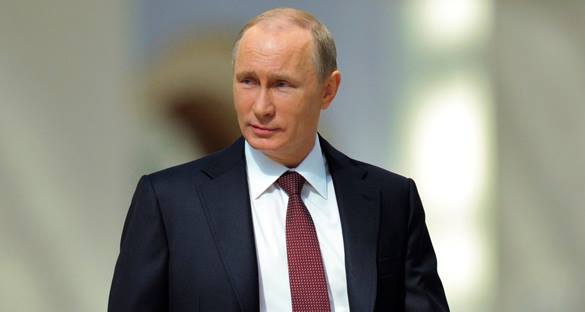 According to Putin, it is impossible to expel terrorists from the country without the Syrian army.

The summit of the Collective Security Treaty Organization (CSTO) takes place in Dushanbe. Presidents of Russia, Armenia, Belarus, Kazakhstan, Kyrgyzstan and Tajikistan will discuss issues of terrorism and extremism, as well as the situation that is emerging on the borders of the CSTO member countries.

An analyst at the Shanghai International Studies University wrote for People's Daily, a Chinese publication, that Russia's assistance to Syria in the form of supplies of military equipment raised serious concerns in the West, because the USA and its allies were given to understand that one needs to set up an international anti-terrorist alliance with the Syrian government to be able to crush the Islamic State. Russia is ready to join such an alliance.

According to Russian President Putin, the state of affairs in Syria is very serious. The Islamic State (ISIS) controls large territories of Syria and Iraq, Putin said speaking at the SCTO summit in Dushanbe.

Putin urged Western countries to put aside geopolitical ambitions and double standards in the fight against terrorism. The West should no longer replace unwanted governments with the help of terrorist organizations.

"One needs to put geopolitical ambitions aside and refuse from so-called double standards, from the policy of direct or indirect use of certain terrorist groups to achieve one's own ambitious goals, such as the replacement of unwanted governments," President Putin said.

"Now we need to join forces of the Syrian government, the Kurdish militia and the so-called moderate opposition, other countries in the region to combat the threat to the statehood of Syria and in the fight against terrorism," Putin said. "Together, with out joint effort, we will solve this problem," Russian President Putin said.

According to Putin, Syrian President Bashar Assad is ready to cooperate with healthy forces of the Syrian opposition. "Of course, one needs to think about political reforms in this country, and we know about the readiness of President Assad to get the healthy part of the opposition involved in the process of state administration," the Russian leader said.

Putin also said that accusations against Russia about its involvement in the current refugee crisis were unfounded. Syrian affairs is the cause of an increased flow of refugees, Interfax reports.

"Attempts are made today to put the blame on Russia for the appearance of the problem of refugees. Allegedly, the refugee crisis has appeared due to the fact that Russia supports the legitimate government of Syria," the Russian president said.

"People are fleeing from Syria to escape from combat actions that were largely imposed from the  outside through the supply of weapons and special equipment. People are fleeing from atrocities of terrorists," said Russian President Putin. "If Russia were not supporting Syria, then the situation in the country would be even worse than in Libya, and the flow of refugees would be even larger," Putin added.

According to the Russian administration, it is inadmissible to dictate from the outside how the Syrians should develop their country, Putin's spokesman Dmitry Peskov said.

Answering the question of what would happen if Russia does not join the US-led international coalition that conducts a counter-terrorist operation in Iraq and Syria, but will support Assad, the US official said that such a move would isolate Russia from the international community even more.

Also read: Washington wants Russia to have another Afghanistan in Syria

At the same time, according to Ernest, Russia's interests in Syria do not completely contradict to the interests of the rest of the world. Russia is interested in the success of the anti-terrorist coalition, Ernest said, adding that it was time for Assad to step down.

The Kremlin considers it unacceptable to impose a way of the development of Syria from the outside, Putin's spokesman Dmitry Peskov said. He reminded what President Putin has repeatedly stated before: "The future of Syria depends on the Syrians."

"Until now, no one has been able to convincingly explain what can be an alternative to the current legitimate Syrian leadership in terms of providing security in the country, in the struggle against the proliferation of the Islamic State and in ensure the unity of the country," said Peskov.