Who can win World War Three if it can be won at all?

Russian President Vladimir Putin said at a news conference after meeting his Finnish counterpart Sauli Niinisto that Russia would aim its striking forces at the territories that posed a threat to Russia's security. 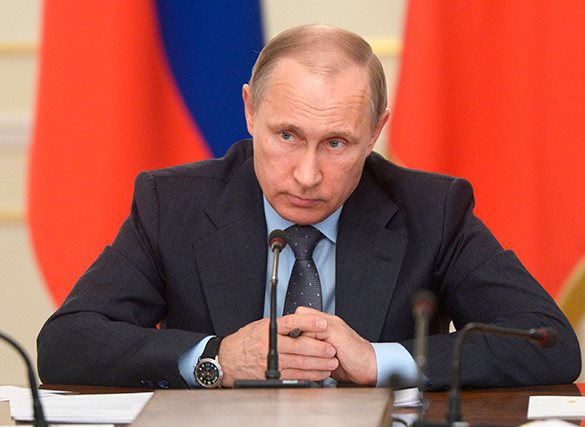 "If someone threatens our security, we will have to aim our striking forces at the territories, from where the threat comes." According to Putin, it is NATO that is approaching Russia's borders, but not vice versa.

Russia to aim missiles at the countries that threaten its security

"We will be analyzing everything and watching it carefully, but for the time being I do not see anything that could become a reason for us to worry. These are political signs expressing attitude to Russia," Putin noted.

Moscow is concerned about such strategic issues as the deployment of the missile defense system in Europe. "As soon as a threat appears in a neighboring state, Russia must react accordingly," Putin said. Moscow's first priority will be to neutralize threats, Putin concluded commenting on the recent plans from the United states of America to deploy F-22 Raptor fighter jets in Europe.

Is there a threat of the Third World War? Can this war be nuclear? Pravda.Ru editor-in-chief Inna Novikova interviewed Vladimir Kozin, the head of the group of advisors at the Russian Institute of Strategic Research about the nuclear parity between Russia and the United States and the lack of control over nuclear weapons.

"Is there nuclear parity between Russia and the USA?"

"The last agreement was signed in April 2010 in Prague. The Strategic Arms Reduction Treaty, START-3, provides for this parity. There is conditional parity on nuclear carriers and warheads, because the treaty does not limit the reserves of the United States - 60 percent is a very serious number. In a nutshell, the Americans can bring back 60 percent of their reserves to considerably increase their potential."

Also read: Are we on the brink of World War Three?

"Does Russia have a reserve?"

"I think she does, and it is a big one. This reserve is not regulated, it can be restored and brought into a state of combat readiness. The most important thing here is violation of parity between missile defense and strategic offensive arms in NATO's favor. Given the amount of tactical nuclear weapons on our doorstep in Europe, it appears to be a one-sided relationship against Russia.

"The Americans have five types of tactical nuclear weapons that were left after voluntary reductions during the 80s and the 90s. The USA has gravity bombs. The Pentagon has five types of nuclear bombs, but they are regarded as strategic offensive weapons only if they are carried by heavy strategic bombers. Those bombers can fly at a distance of 18,000 kilometers - this covers all of Russia's territory.

"Sea-launched cruise missiles are not regulated in nuclear arsenals at all, and the Americans can use them too, as part of the Prompt Global Strike concept. This is a highly effective weapon that can fly for thousands of kilometers."

"The nuclear weapons of Russia and the United States can destroy planet Earth five or ten times in a row. One time will be enough for all people. Why so many weapons, what are they for?"

"The Americans have used nuclear weapons twice after they built nuclear bombs in 1945. They had an intention to use nuclear weapons seven times in various regional conflicts. The American concept of a massive nuclear attack remains unchanged. The plan of attack exists to this day, and every US president modifies it to fit circumstances. At the end of 1945, the USA developed a plan to attack 17 cities of the Soviet Union. Today, the Americans have 3,500 targets in Russia.

"We do not have such symmetrical measures. On the American side of the Pacific and Atlantic oceans, Russia does not have any missile, strategic, offensive or tactical weapons. Russia does not conduct military drills in Latin America either.

"Under the Treaty of Intermediate-Range Nuclear Forces from 1987, signed by Gorbachev and George H.W. Bush, we destroyed twice as many missiles than the Americans did. We had a romantic period with NATO in late 80s and 90s. There were 18 cooperation programs, we used to be strategic partners. Today, we are strategic adversaries. None of those 18 programs work. It is the USA that stands behind this confrontation. Fifty percent of NATO's funding comes from America. At the same time, NATO is a tool that executes 100 percent of USA's interests. This is very good business."