It is an open secret that the Russian defense industry is having a hard time now. However, some top-level military servicemen still assure that the nation’s Armed Forces can repel any attack. Colonel General Nikolai Frolov, of Russia’s Air Defense troops, brought back to earth those who believed in the invincibility of the Russian army. The official said that Russia is practically defenseless against possible nuclear attacks. 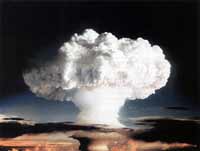 “Taking into consideration the air assault weapon of a potential enemy, we will have to make a step further to enhance air defense means and their interconnection,” Frolov said. “In particular, an anti-aircraft missile brigade needs to be outfitted with missile systems of different range, such as S-300, Buk, Tor, Strela-10 and Man-portable air-defense systems (MANPADS),” the colonel general said.

According to the chief of the tactical air defense of the Russian Federation, promising long- and middle-range anti-aircraft missile complexes should be able to resist strategic aerospace attack aircraft, hypersonic nosing down warheads and hypersonic cruise missiles. As for small-range anti-aircraft missile complexes, they should provide the detection of aerodynamic and ballistic objects, including those performed with Stealth technology and flying at a speed of 2,100 meters per second.

Russia ’s intelligence agencies should be modernized as well. According to the colonel general, nowadays Russia creates the united information system of air defense forces that enables to combine potentials of radar and radio intelligence of all troops in the Russian army. However, experts doubt that these plans can be realized. “For the time being no military program has been implemented in Russia,” Alexander Hramchihin, the Head of the Information-Analytical department of the Institute of Political and Military Analyses, said. “Within the past years only one battalion of S-400 systems was introduced in Russia. That’s nothing. If we delay, there will be no one to address the problem. The nation’s defense complex is in poor condition, inflation and defense prices are soaring up. Under these circumstances we stand no chance,” he said. “In other words, the Russian air defense system is unable to fully resist possible attacks. Moreover, it has been practically destroyed. We have to restore them from scratch,” Hramchihin added.

Meanwhile a nuclear war may start at any moment, stated Democrat Adam Schiff, a co-chairman of the national defense workgroup of the US House of Representatives. “The USA and Russia still keep nuclear weapons at the ready, and they may immediately be launched,” he said ahead of voting on the US 2009 defense budget bill. “Although the risk of a deliberate nuclear war with Russia is rather low, the danger of an accidental launch has enhanced.”

Besides, the congressman reminded that “since the end of the Cold War the procedures for launching nuclear armaments have not practically changed.” He also referred to the January initiative of former Secretaries of Sate Henry Kissinger and George Shulz, Secretary of Defense William Perry and former senator Sam Nunn who voiced the necessity “to take more time to warn and to take a decision as regards the launch of all ballistic missiles with nuclear weapons”, which will help “to decrease the risk of accidental and unauthorized attacks.” According to Schiff, the existing procedures for launching ballistic missiles that “do not give authorized people sufficient time to take well-considered decisions are unnecessary and hazardous under the current conditions.” That is why the change of these procedures will help to “make nuclear armaments of the USA, Russia, China and other countries safer on the sidelines of the multilateral agreement,” the congressman emphasized.

After Schiff’s speech the House of Representatives confirmed unanimously the claim that the head of the Pentagon should study the possibilities of changing the current procedures of launching ballistic missiles with nuclear warheads in the USA, Russia and other countries that have such strategic weapons at their disposal. “The US Defense Minister should conduct research to assess the procedural and physical variants that will introduce transparent and controlled delay before the command to launch missiles in the USA, Russia, China and other strategic states,” the confirmed document ran. The head of the Pentagon should also suggest variants of possible “inspection regimes” and report on “the presence of different variants in other countries.” The head of the Pentagon has a year to prepare such a report containing confidential information and to present it in Congress.