Are we on the brink of World War III? 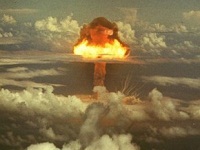 In an article, 'US-NATO Military Overkill' published by Pravda.Ru last year, I made the case that the US and its alliances with European and Asian nations, has far greater military assets than Russia and China combined.

Does that mean that America and its allies would win a global war?

Actually, the author never tried to answer that disturbing question. One might assume that the answer would be yes but, in fact, it is no. If we do the unthinkable -- and allow another world war to erupt -- there won't be any winners, everybody on the planet will lose. Here is why.

As noted in that prior article, because of its vastly superior firepower in the air and at sea, NATO would outnumber and outgun Russia. The combined 28 nations of NATO have a combined population triple that of Russia. In addition, national budgets that are many times the size of the nation they consider their enemy.

Given those facts, in the face of being outnumbered about 10 to 1 in naval vessels and about 3 to 1 in air fighting capabilities, Mr. Putin would have no recourse but to resort to nuclear weapons.

World War III would not be a repeat of the previous global wars. It might start out looking that way but would soon get quick and dirty.

Moreover, the Russian leadership would not stand by and watch their cities be obliterated by a more intense version of 'Shock & Awe', which the US launched against Iraq. We would not see American and NATO troops storming into Russia to engage with the Russian army, no way.

The war that everyone fears we are moving inexorably toward could not be a protracted war of attrition as WWII was. It would rapidly escalate into a brutal exchange of missiles, of aerial battles between US and Russian jet fighters, of US-NATO aircraft carriers and battleships sending sorties to fire rockets and drop bombs on Russia, Iran and Syria.

We have to bring in the fact that Russia is surrounded by former allies who are now NATO signatories. At the point that WWIII erupts those nations might well regret there having switched their allegiance to America. There is no doubt in my mind that they will suffer the full wrath and fury of their former ally.

As we say in America, talk is cheap.

Once the bullets, bombs and missiles start flying and Russian blood flows the former Soviet allies, now NATO countries on or near the Russian border, will start dying. When push comes to shove the eastern Europeans are neither stupid nor naïve, they know what will happen.

Russia could easily deliver fatal or near fatal firepower to the eastern European NATO allies quickly. Even if they have the support of the American military it will not be in the form of troops on their borders. While Russia is outnumbered and outgunned overall, its military is well-equipped to quickly mobilize and defend the country.

Then we have to bring Russia's allies into the picture. These include Iran, Syria and last but not least China. Syria is already in the throes of a civil war and that would expand rapidly. Iran would mobilize, no longer just to support Assad's military, they would fully engage and make quick work out of the rebels.

Of course, Iran has been in the crosshairs of both Israel and the US ever since the latter invaded Iraq. Yes, Israel too would engage along with NATO to try to destroy Iran, Hezbollah and Syria. China would support Russia...

But wait, we are forgetting a number of important factors that have to be plugged into this scenario before any such war could be waged.

The global economy is not what it was leading up to WWII. In fact, it is nearly the opposite. The US and Europe had very little debt going into that war. They emerged with huge levels of it when it was over.

If a global war breaks out it will quickly bankrupt the world and send the global economy into a depression. People seem to think that America can wage another war right on top of two wars with impunity. But those two wars already had a large hand in ratcheting up the national debt to $18.1 trillion and counting.

The wars against Iraq and Afghanistan were puny compared to what any WWIII scenario would look like. The cost of having to fully mobilize its forces overseas would quickly drive the federal deficit through the roof. The US is already tagging along with the debtor nations of Europe having pushed its national debt to 106% over GDP in 2014.

Next we have to ask how Washington would pay the Pentagon's huge bill. That brings in the fact that China, which American politicians treat like an enemy in public, helps to finance the US debt. It does so through buying Treasury obligations and by running a trade surplus with America.

Well, would China continue to accumulate US debt, and trade dollars, in the event of a global war? No they would not. Do Americans really think the Chinese are that gullible or stupid? US right wing propagandists claim China is an enemy then they take checks and cheap imports to keep America going.

That financing well would dry up instantly.  Given this cold reality, how would America finance its participation in WWIII? Oh I failed to mention that Russia too has purchased US Treasury obligations on a smaller scale. That would come to a halt very fast.

Of course congress could raise taxes, or could they?

Even the hawkish Republicans would get chills at the prospect of the rich actually being forced to foot the bill for a war. That would be a novel idea. Didn't they just enforce austerity? There is no slack in the federal budget they told taxpayers, none, bite the bullet.

No you millionaire congressman, you bite the bullet and your tongue as well...

Here is where the real domestic poison pill enters the picture for the US. The feared demographic 'baby boom' nightmare is unfolding like a Stephen King horror plot. For the next 15 years a shrinking workforce has to fund the social security program, whose number of recipients is and will skyrocket.

In fact, even the rosiest forecasts project that worker's will not be able to shoulder the bill. That means that the 'trust funds' will be used to make up the revenue shortfall and those will be gone no later than 2033. But that would be moved up considerably if a recession or major war were to occur.

Are the reasons behind the FED's insane and unprecedented quantitative easing becoming clearer?

The US is already imitating Japan of the 1990s and the imitation will only get more real. In the event of a full-scale war, congress would be faced with slashing social security -- and other safety net programs - as well as raising taxes... poison pills indeed.

America already has 50 million people on food stamps, many of them employed in low paying jobs or working part-time. A prudent politician might worry that all this is a recipe for social unrest.

What the FED and the Japanese and Euro central banks have proven so far is that they can print money, but not stimulate their economies. After 6 years of running the printing presses nonstop the global economy is deflating into a recession.

At this inopportune moment in history, suddenly the prospect of a global war rears its ugly snout. Is it not abundantly obvious that world war would only temporarily boost production and, in turn, inflation? But that would not result in net wealth-creation but in destruction and loss of life on a massive scale.

The already overheated printing presses would continue to run nonstop until they quit. The world would be drowning in dollars, yen and euros, literally flooded. But isn't it inundated already? Yes, of course the military-industrial complex would profit as usual.

But the game would be over because the world's currencies would end-up shredded; confidence in global trade squandered; there would be no reserve currency to replace the dollar and whoever survived would have to endure a total reset.

This is no chess match, no game of chicken this is life and death on a global scale.

NATO and its anti-Russian backers ought to realize that if global war breaks out the straits of Hormuz, which Iran borders on, gets shut down. Enjoy your cheap oil and shut up! Keep in mind that Russia, in fact, is the world's largest oil producer and if war breaks out the price of oil skyrockets...so be careful what you wish for.