On the night of September 26, 1983, a duty officer at the command post of early warning air defense "Serpukhov-15," Lt. Col. Stanislav Petrov decided to ignore the warning of the automatic launch from the U.S. territory of five intercontinental ballistic missiles "Minuteman" with ten nuclear warheads each directed at the USSR.

Relying on common sense (five missiles is not enough for the first strike in the war), he declared a false alarm and was right: there was a failure in the notification system. The third world war did not break out. It is hard to imagine what would have happened if the USSR reciprocated. 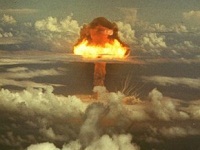 A month earlier, there had been an incident after which Colonel Stanislav Petrov had the moral right to press the "Return" button. On September 1, 1983, over Sakhalin, a Soviet fighter "Su-15" shot down a passenger "747" plane of "Korean Airlines." 269 ​​people, mostly Koreans, Japanese and Americans flying from Alaska to Seoul, were killed, and their bodies have never been found.

The South Korean plane was in the Soviet airspace for two and a half hours, having deviated from its route as much as by 600 miles, and right in the direction of Russia's secret military objects. It took the officials a long time to decide what to do with this unexpected intruder.

Just in 90 seconds it would have been over international waters. But the command to kill was made, and a military pilot Gennady Osipovich pulled the trigger. "The target is destroyed", the report of the Russia pilot recorded by the American interceptors was broadcasted around the world. The government of the USSR kept silent.

"The case of KAL-007" was classified by the Soviet secret service and their U.S. counterparts in the CIA for 50 years. Despite global geopolitical changes, it has not been declassified to this day.

To this day it is difficult to get to the bottom of this case. There were too many stakeholders in this tragedy - politicians, military, and intelligence agencies. None of them would benefit from the truth.

Why did the Korean aircraft intruded on the Soviet Union airspace?  Everyone realized that it was a test flight to test the Russian reaction. In that region in the Pacific the US Navy was conducting large-scale exercises. There was no doubt that the South Korean "Boeing" was a real spy plane, only its passengers hardly knew about it.

A similar event took place five years before the above events. On April 20, 1978, in Severomorsk, at the main base of the Northern Fleet, a target was detected that violated the airspace north of Severomorsk and was flying over Murmansk. A command followed to force the offender to land.

The aircraft was "Boeing-707", also Korean Air, a passenger flight Paris - Anchorage, passing through the polar region. The plane got "lost" and instead of Alaska was flying over the Kola Peninsula. The area hosted a Soviet submarine base and other classified military facilities.

The "Korean" was given clear instructions: "You violated the Soviet airspace. Follow me", "Land." For ten minutes pilot Alexander Bosov on "Su-15" was flying next to the offender, flickering at 50-100 meters from the cockpit. These maneuvers were seen by all passengers and ignored by the crew.

Finally, "Boeing" turned sharply to the west and flew towards Finland. A command to stop the offender followed.  A missile was sent to the tail of the "Boeing" and blew off part of a wing. The commander managed to land his wounded plane on a frozen lake.

As a result, two were killed and 13 wounded. The experienced pilot who flew this polar route over 70 times answered that he did not hear anything. Over the years, analysts called this a test flight.

In January of 2006, an international public organization "Association of World Citizens" presented the retired Colonel Petrov an award for the Prevention of a Nuclear War - a statuette of  a hand holding a globe. Of course, one officer did not decide the fate of the planet, but he had all the courage, given the recent incident with the Korean airliner - trespasser.