'Crimea: Way Back Home' as seen through Western eye

The most important thing that Western media saw in the documentary "Crimea: Way Back Home" that was shown on Russian television on Sunday, March 15, was Putin's readiness to set Russian nuclear forces on full combat readiness, if the West had taken effort to impede the referendum in the Crimea. Traditionally, Western media accuse Russian President Vladimir Putin of lies and bragging to intimidate Kiev. Yet, even Western journalists do not deny that the Crimeans are happy to return to Russia. 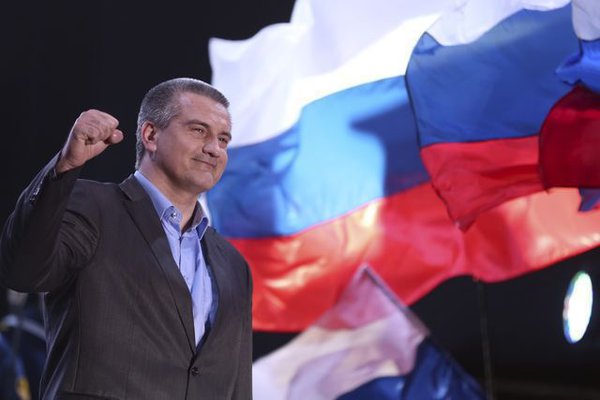 "The documentary in the form of an interview with Vladimir Putin "Crimea: Way Back Home" about the "annexation" of the Ukrainian territory was shown on Russian television on the anniversary of the referendum in the Crimea," the Polish newspaper Wiadomości.wp.pl wrote. The West and Kiev condemn the "annexation" as a violation of international law, while Moscow presents it as an act of historical justice, the Polish newspaper wrote and then attempted to trip Putin.

"Moscow originally denied that its soldiers took part in the Crimean events. However, in the documentary, Putin admitted that he ordered to consider the options to annex the Crimea prior to the referendum, namely, after Ukrainian President Viktor Yanukovych was removed from power, the newspaper said. If there had been "problems with the Crimea," Russia would have been ready to set its nuclear forces on full combat readiness, the Polish publication wrote.

Russia's readiness to use nuclear weapons permeates through all news reports about the documentary. "Vladimir Putin has admitted that he was ready to place his nuclear attack forces on alert when he seized Crimea a year ago" The Daily Mail said. "The president explained that he knew the West could have intervened, and had been 'ready' to put his nuclear arsenal on alert, adding: 'I talked with colleagues and told them that Crimea is our historic territory. We were ready to do it," the newspaper wrote.

"The documentary portrayed Crimea's annexation as a heroic emancipation of the peninsula from an onslaught of Ukrainian extremists trained by U.S. puppeteers. The peninsula's annexation last year helped drive the Russian leader's popularity to all-time highs at home but led to the worst divide between the West and Russia since the days of the Cold War," The Wall Street Journal said.

The American publication notes that the documentary contained a story of how a US Navy destroyer was detected in the Black Sea. To stop the US vessel, K-300P Bastion coastal defense missile systems in Crimea were deployed. "We deployed them so they could be seen clearly from space," Mr. Putin said.

Many Western publications paid attention to the following remarks from Russian President Putin: "The Crimea is our historical territory. Russian people live there. They were in danger. We cannot abandon them."

Carol J. Williams of Los Angeles Times wrote that "Putin accused the United States of masterminding the three-month uprising in the Ukrainian capital that ended with the ouster of Kremlin-allied President Viktor Yanukovych." "The United States, along with Poland and Lithuania, "facilitated the armed coup" by training the nationalists, Putin said," the journalist wrote.

Other Western mass media produced reports about one year of life in the Crimea "in the hands of the Kremlin."

According to Euronews, life in the Crimea has changed a lot. Salaries and pensions have grown, the quality of social services has raised along with unemployment and prices. Food prices have doubled, whereas the inflation rate has soared 38 percent up, the news channel said with reference to the Crimean authorities.

Pilar Bonet of El Pais, Spain, wrote that there were enough consumer goods in the  Crimea, although food products supplies have not been stable due to problematic shipments via the Kerch Strait and Ukraine's Blockade. Water is deficit, tourism revenues have dropped considerably. To crown it all, the crisis has deprived the Crimea of the promised investment from Moscow. "The streets and roads on the peninsula are in deplorable state, although the number of cars has been growing. The Tatar minority is heavily guarded, whereas its leaders were either jailed or exiled to Kiev," Bonet wrote.

As you can see, "repression in the Crimea" is another fertile subject for Western media. In addition to the Tatar factor, Western journalists indicate that Ukrainian symbols (for example, the Ukrainian flag) in the Crimea are banned and journalists are not allowed to include pro-Ukrainian slogans in their reports, Serbian news agency Tanjug said.

"Crimea is a special place for Russians, simply because at some point almost every Russian citizen has spent happy vacation days on the sunny Black Sea peninsula. With its attractive climate, Crimea has been a place of recreation and longing in Russian culture since the 19th century," Ingo Mannteufel, the chief of the Russian service of DW-WORLD.DE wrote in his op-ed. "In Soviet times Crimea was the most popular tourist destination in the country. From the early 1960s on, millions of Russian workers took their hard earned vacations on the peninsula. Even when Ukraine became independent after the collapse of the Soviet Union, hundreds of thousands of Russians continued to flock to Crimea every year," he continued.

"It should come as no surprise that many Russians consider Crimea to be "their" peninsula. And when Crimea "returned to Russia" exactly one year ago on March 18, 2014, many Russians saw it as the result of some kind of historical justice," Ingo Mannteufel wrote.

"The US and the European Union cannot and will not accept such a fundamental breach of international law, especially since Putin has become increasingly open about Russia's role in guiding the Crimean referendum...A true easing of tensions between Russia and the West can only come about after the legal status of Crimea has been settled internationally - either through a return of Crimea to Ukrainian sovereignty, or through a treaty between Russia and Ukraine in which an independent Ukrainian leadership freely surrenders its rights to the peninsula in accordance with international law. In light of Putin's authoritarian path, both of these scenarios are utterly illusory at the moment," the German journalist concluded.

The Crimeans are happy about Russia's move to reunite with the peninsula, Christian Science Monitor said. "Moscow has paid a heavy price for its actions, with its economy sagging under the weight of Western sanctions, while Russia's image around the world has suffered a black eye over its actions in Ukraine," the publication said. "A telephone poll conducted by a German firm among Crimeans in January found that over 80 percent of respondents were happy to be newly-minted Russians," Christian Science Monitor wrote.

The most important lesson of Russia's reunification with the Crimea is the fact that Russia has protected the Crimeans from what is currently happening in Ukraine.