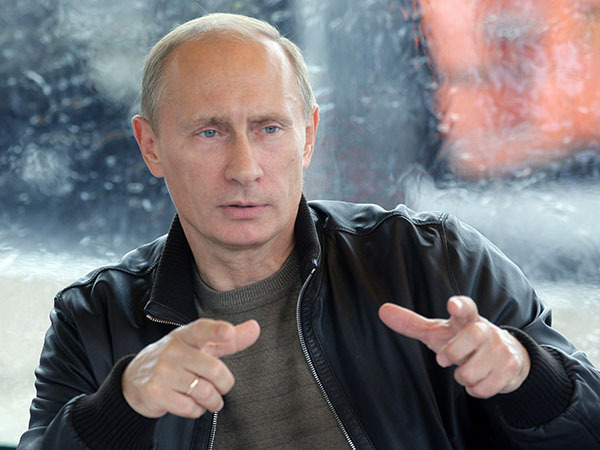 The West demonizes him, Russia idolizes him. The year 2014 started with the dazzling Winter Olympics in Sochi that Russia triumphantly won and closed with the collapse of the Russian ruble. The Crimea returned home, and his popularity skyrocketed, but in the West, he is viewed as an aggressor. Because of him, the Euro-Atlantic world started putting unprecedented pressure on Russia. Washington accuses him of building an empire, whereas opponents of liberal ideology see him as a person who takes alternative efforts to transform the world order. In a nutshell, the year 2014 was the year of Vladimir Putin. In 2014, the world spoke about Russian President Vladimir Putin most.

"Our taiga is so spacious! It's not even populated! Why do we need global power!? This would be too great a burden! We'll conquer the taiga first! But nobody should tamper here, and nobody should want to be a peace commissioner!" This was what Russian President Putin said about the existing world order in his speech at the Valdai Forum. He slapped America for "letting the genie out of the bottle" and regrettably added that "even so-called theorists of controlled chaos had no possibility to put it back in." Putin said that the American style of politics made the world a dangerous place. He noted that "Russia can afford to be tough." He delivered the message to those who do not like to call a spade a spade. In this connection, he referred to Bismarck, who was considered a dangerous man, because he spoke his mind. "Well, so what?!" Putin added decisively, thus indicating, that he declared war on massive trends. He spoke a lot about issues related to Motherland, respect, honor and family, thereby demonstrating the burgeoning conservative renaissance in Russia. At the same time, he denied accusations of the return to the past. "Conservatism does not necessarily mean isolation, and Russia is not frightened of progress and upgrade."

"I'm a greatest Russian nationalist, but, most importantly, this nationalism serves the people. One should not go to chauvinism, because it is destructive," he said. Putin expressed his perception of democracy in the following phrase: "I need to meet expectations of my people, rather than of the West." He described the current situation in the world as a depressing picture. When former Austrian Chancellor Wolfgang Schuessel jokingly asked Putin about his pessimism, he responded with a joke. "A pessimist drinks cognac, and, shaking his head, says that it tastes like a bug. An optimist, crushes a bug on the wall, and says that it smells like cognac. You know, I'd rather be a pessimist, who drinks cognac!"

As we know, Putin does not need to drink anything to be brave enough to stand up against the hostile world. "As the say, what Jove can do, a bull can't. Yes, a bull can't, but let me just say that the Russian bear will not ask permission from anyone! The Russian bear will not - and I know this for sure - move to different climatic zones (for example, invade Iraq, - Ed.), but it will never give his taiga to anyone!"

This is what Vladimir Putin is all about. Behind harsh words, one can also see a person, who has a sense of humor, who is very open-minded, and who can top verbal attacks masterfully. He is not only a media-created macho man, but also a man, who loves doing sports, who makes women dream of him - not only in Russia, but also in China. However, punctuality is not one of his advantages. Yet, when it comes to work, Putin has clearly a German style of dealing with it. For him, his motherland is important not only in his public speeches. When serving at the KGB, he learned to protect what he considers his own. He does not change government leaders, but in difficult times, he helped mayor of St. Petersburg Anatoly Sobchak, and, most likely, Boris Yeltsin praised him for that.

True, Putin is conservative in the literal sense of the word. He does not like computer and prefers text printed on paper. Putin's power does not mean money, contrary to multiple rumors of his property. Putin wants to write history and it moves him, even if he might want to leave the Kremlin, but he can not. Not yet.

Putin is neither the devil nor a dictator, as foreign media tries to portray him to be. He does not drink blood, nor does he think how to subdue neighboring peoples and then the whole world. Yes, he called the collapse of the Soviet Union the greatest tragedy of the 20th century, but not because he was nostalgic for communism. He mourns the size of his country, and if he wants something, then he wants the whole world to honor Russia again.

Putin is building not a nation, but an empire

Putin is building a nation, not an empire. This, of course, does not exclude the growing influence of the country in the near abroad, but he also knows very well that neighbors will start looking up to Moscow if Moscow is strong inside. However, there is a long way to go to achieve this, but, at least, Putin stepped on that path. As we can see, this way is not only long, but also full of obstacles.

Is there a way to explain that from more than seven billion people on Earth, the United States is afraid of only one - Vladimir Putin? At least, this can be seen in how the USA reacts to Putin's actions and words - sometimes decisively and desperately at times. Putin challenged America to rebuild the world order based on hegemony of the White House that emerged after the end of the Cold War, and he sees the world differently - not the way the West does, being too much in love with its own greatness and exceptionalism. Putin demonstrated an alternative that already has a dangerously large camp.

Few would have thought sometime in the mid-90s, that a little gray mouse that came to Moscow from St. Petersburg would grow into such a charismatic politician, who, almost two decades later, will become world's most influential politician according to Forbes magazine. Putin's secret lies in the fact that he feels the vibration of the Russian soul. He knows what the people want. First and foremost, it is stability and then, for such a large country - greatness.

Putin's opponents understood that too. Today, after the "return of the Crimea", with the help of sanctions, the fall of  oil prices and the collapse of the ruble, they want to set Russia against Putin. The Russian government, first of all, needs to concentrate on the survival of the nation,  and the long-planned actions to restructure the national economy and reduce export dependence has been delayed indefinitely again along with so ardently wanted technological innovation and modernization.

During the 2000s, the Kremlin was able to stabilize the country that was standing on the verge of disintegration. This, inter alia, became possible due to high oil prices. They triggered economic growth, the long-awaited growth of profits, and Moscow dangerously strengthened its influence in the eyes of many. Now she has to do without it, and, of course, this is a hard nut to crack.

Of course, the one who goes to war must keep his powder dry. The Kremlin was aware of that, when it decided to take the Crimea back. It should be added that such a move was a choice between "bad" and "very bad." This situation was alien to Putin's German cautiousness. Nevertheless, despite obvious dangers, there were very strong arguments in favor of intervention. It was not some anti-Western argument that moved the Kremlin. Putin - as Henry Kissinger put it - was first and foremost a patriot, who is very annoyed, if he sees something that he considers interference in Russia's internal affairs.

One had to act, and the Kremlin broke the line of Western foreign policy. Russia's intention to cooperation with the West has not brought any result: the West has not recognized Russia an equal partner. Therefore, Putin has lost nothing from throwing Zbigniew Brzezinski's chessboard against the wall.

However, every day shows traces of the American foreign policy strategy, the goal of which is to attenuate Russia. Moscow has joined a long, multi-level game with an open result, in which it has already won and lost battles.

The war is still far from end. Russia may survive the conflicts and remain whole, if it continues to be prudent. It is already clear that Russia will suffer injuries, but if it does not let the West drag it into an unacceptable armed conflict, Russia will be able to avoid the threat of a second Afghanistan.

The President of Russia needs to evaluate reality and, like a good judo athlete, he needs to use opponent's strength against the opponent. This tactic has worked well before, but soon one will have to show how to keep the enemy at bay. A year later, Putin may become the most influential politician again, but this can be possible only if he exercises his skills of both a judo athlete and a chess player. Most importantly, he must demonstrate composure and self-command.