The Black Sea, a popular tourist destination for many Russians and Europeans, has been turning into the center of economic and geopolitical fights. The Black Sea is the place where many transport routes cross, where deepwater pipelines are built, where large oil and gas reserves are explored, where naval drills take place, etc. 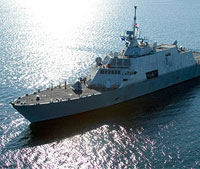 Russia exports most of its grain and Caspian oil via the Black Sea. In addition, Russia started shipping its natural gas along the bottom of the sea to Turkey within the scope of the Blue Stream project. Another project - the South Stream – is being currently developed to ship gas directly to the European Union.

Turkey is very interested in the Black Sea too. The nation’s straits which connect the Black and the Mediterranean Seas, do not cope with the traffic of tankers. The Turkish government restricts their navigation, whereas exporting countries build pipelines bypassing the Turkish straits. Turkey adds more fuel to the fire as it sounds out other opportunities of cooperation in the energy industry trying to reach Europe and Russia.

In addition to oil and gas pipelines, The Black Sea may soon be the home for countless oil platforms. Turkey attracted Aramco and BP in 1995 to explore deepwater oil fields in western and central parts of the Black Sea. About 100 million tons of crude were discovered as a result.

Turkey conducted another major research on its Black Sea shelf and discovered ten billion barrels of crude reserves. Brazil’s Petrobras was the first company to have signed the first deepwater drilling contract with Turkey. The first well is to be drilled already in 2010. The USA is next in the line: a contract with Exxon Mobil has already been signed, Chevron comes next. Bulgaria, Romania and Georgia either conduct or completed the exploration of their Black Sea reserves.

Independent republics are eager to obtain as much independence as possible, especially when it comes to the energy industry. Both Georgia and Ukraine lay big hopes on the Black Sea oil. Ukraine does not seem to be able to begin extracting it due to its internal political situation. However, the nation has already started mining natural gas at 4 of 14 gas fields in its Black Sea and Azov Sea shelves.

The Republic of Abkhazia has also set out its interests in the Black Sea oil: the reserves are evaluated at 200-220 million tons, whereas the field is located only ten kilometers far from the seashore. Abkhazia’s Ministry for Economy and Russia’s oil giant Rosneft signed an agreement in May of 2000 to conduct additional exploration of the field and build the required infrastructure in Abkhazia.

The Black Sea is like a magnet. The Organization for the Black Sea Economic Cooperation counts 12 member-countries, some of which, Albania for example, do not have any geographic relation to the Black Sea. Russia tries to retrieve its positions in the region too. US vessels appear in the sea on a regular basis, whereas US oil companies continue to establish their presence there. The European Union has been quite active in the region, especially after Bulgaria and Romania received membership. The EU already plans to assign 1.7 billion EUR a year for the implementation of various programs in the region. To put it in a nutshell, the Black Sea becomes one huge battlefield.