Jesus, according to the Bible's Books of the New Testament, was a frequent visitor to Herod the Great's Temple in Jerusalem. The Scriptures also speak of how he often marveled at the stately and magnificent architectural structure. For sure, the skillfully crafted stones were a testament to the Almighty. The 'Nazarene' also taught there amongst the massive columns. He instructed not only the people; his wisdom for the most part corrected the religious scholars of the time, namely the scribes and Pharisees; not that the learned scholars were all that accepting or even accommodating of his sometimes stern rebukes. 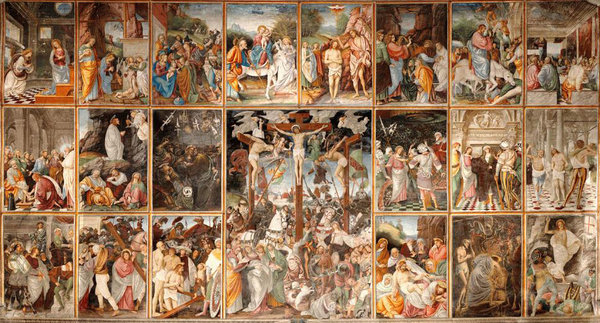 On one occasion, Jesus saw 'red'. When he witnessed the ubiquitous presence of commerce in the Temple courts, Jesus was compelled to act. He called these religious feasting merchants out for what they really were: a Den of Thieves. Remember that term. Jesus sprang to action. First, he overturned their tables. The filthy lucre coin scattered during the melee. His resoluteness is worth remembering too.

To add injury to insult, Jesus fashioned a 'whip of cords'. Moreover, he did not choose a stiff reed or sturdy stick. No, Jesus had a more formidable weapon in mind. A whip made of strands of rope or twine bound together at the end can be wielded with maximum efficacy. Not only does the whip make a sharp crack when struck, it also leaves a palpable bruise on the object of its intended ire. With this leveraged tool, Jesus drove these scoundrels out! Do not forget that point either.

The Scriptures are largely silent after this tumultuous event. Accordingly, use your own imagination as to flimflam men's fate. However, history picks up their trail. We learn that centuries later, their progeny was chronicled during the Middle Ages. By then the scoundrels had morphed into a different species. Despite the geographic and cultural differences these moneychangers were still every bit the bandit that they were in Christ's time. No doubt, this bourgeoisie class sought and found refuge in Medieval Europe. Some of them were known as the Knights Templar. This syndicate was also active in Feudal England.

Across the Channel, when the debt-ridden Knights joined the Crusades to the Holy Land in order to preserve their status, the syndicate offered them a new 'service'. In addition to financing the Crusaders' risky expeditions, the purveyors of finance provided security. The bank, as steward, would store the gentry's gold and in turn 'safeguard' their assets. The service came with a fee of course, as well as a built-in indemnity 'option': In the event of a client's soldierly misfortune, incarceration, or death on the Middle East's battlefields, the guardian bankers could delay repatriating the safeguarded gold.

Their new banking scheme worked far beyond the merchants' wildest dreams. In no time, the moneychangers of yore were even richer. They used the newfound wealth transfer to further their political interests. Donated money was now the means to entrench their high social standing in the communities they occupied. Sound familiar?

Unfortunately, this sordid story did not end there. It was only the beginning! Like a plague, this profitable invention, the banking industry, began to spread its tentacles. During the 19th and 20th centuries, debt financing expanded globally. Headquartered initially in London, the cartel sought newer and more lucrative markets overseas. The Bank of England set its cross hairs on America. The New Republic was in dire need or reconstruction after the Revolutionary War. The subsequent Civil War wrought more economic hardship. The combined fallout from both made America ripe for pillaging. The Industrial Revolution was the catalyst. With it, 'Lady Liberty' became the world's newest and most powerful debutante. Capital like water poured into New York from across the Atlantic pond.

The advent of the automobile as the new mode of transport offered new prospects for more debt expansion. Henry Ford's dreams of mass production meant re-tooling America's factories. Ford's ambitious plans required massive investment. The banks stepped in. The government as well had their own ambitions. With a broader manufacturing base, Congress too could expand its hegemony and budget. Income taxes alone, both corporate and individual were woefully deficient. That was the propitious moment and clarion call for the bankers.

In December of 1913, acting out of privy and privacy, a handful of secretive men formed the Central Bank. As the (U.S.) Federal Reserve System, this unscrupulous denizen sought to manage (control) the nation's money supply and 'lend as a last resort' to the Administration. The loan though came with great cost in the form of illegal interest. Congress took the bait regardless.

With relative ease, the bankers repeated this same usurious scheme all around the globe. Through subterfuge and deceit Central Banks, including their proxies the World Bank and IMF, highjacked working class people's savings and in turn enriched themselves and their crony class aka hedge funds, defense contractors, and NGO's. In effect, these craven criminals have usurped each national government's treasury function. However, American patriots have now awoken to the scale and scope of this theft of their livelihood. The awakening has spread globally. Honest citizens such as those in Iceland have already taken remedial action. The theft had to end. They jailed their bankers.

Other countries need to follow Iceland's lead. Rather than act alone, freedom-loving nations should replicate Jesus' passion. Build a whip function made from multiple national strands (BRICS). Bind those together as a cohesive force, and then wield it like a powerful political hammer. Use it to drive these parasites out of your centers of commerce and expunge them from your halls of congress. Scatter them to the wind, but if you can, gather enough corroborating evidence; and then lock them all up.

Photo: By Gaudenzio Ferrari - This file has been extracted from another file: GaudenzioFerrari StorieCristo Varallo.jpg, Public Domain, https://commons.wikimedia.org/w/index.php?curid=29809334