Out of Mexico: Good Great News

When the insane Western MSM is not spewing fake news about U.S. President Donald Trump, which seems like every minute of each day, they sometimes venture outside their 'comfort zone'. The Establishment's lapdog poodles need a break. They soon smell blood. Reporters pick up the trail. Usually, the hot story leads south. Yes, America's southern neighbor, Mexico, aka 'The Narco State' is a 'good' change of pace. To the networks, any macabre scoop about the competing drug cartels ongoing gruesome 'hits' of rivals and citizens alike is worthy of their efforts. Murder as always is news, just the same. Feel good stories rarely emanate from Mexico. The besieged third world country is plagued by a dearth in that capacity. 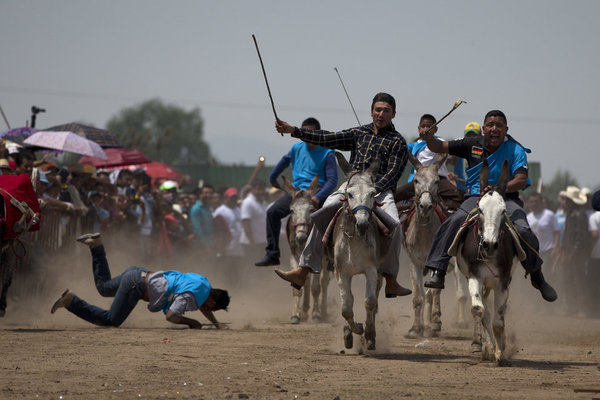 Never made it to the headlines

Not this one instance though. Although, Mexico's huge yuge story never made front page let alone the headlines or as a newsreader's lead story. Nary had a major American network even mentioned what happened. Neither did any sports channel pick up the ringside action. For the most part, the middleweight boxing bout between two of Mexico's star pugilists, Canelo Alvarez and Julio Cesar Chavez Jr. hardly deserved mention by the media, never mind the honorable form. Only boxing aficionados, what is left of us, paid any attention. Notwithstanding the meme, boxing is a waste of time, money squandered and by extension not turning many heads among media moguls, it still attracts favorable TV ratings. Moreover, boxing is entertaining if one still considers it a real sport but minus the blood moniker. Many fans regularly tune in. On occasion, the fight game is fun to watch.

This past May 6 on Cinco de Mayo weekend was just such an occasion. The younger man, Saul, whose star is still rising met the older (at 31) well, let us say journeyman fighter in Chavez. Critics claim this match was nothing more of a tune-up. In short, the combatants did not deserve the marquee billing in Las Vegas, or anywhere else, let alone in the big 'pay-per view' American market. As many of you know, often times these same critics fall flat on their faces. The so-called experts wind up kissing the canvas with their loose lips. Case in point: You guessed it. Donald Trump, against all odds and after summarily dispatching all pretend usurpers (21) won the U.S. Presidency.

Back to the bout ... Hard not to like Saul. He is diminutive in physical stature. At 5' 9", he hardly imposes opponents. Lacking brute power, and not well endowed with blazing hand speed or quick feet Canelo compensates with adroit skills, determination, and faith in his abilities. Moreover, he fights with the heart of a lion; and a young ferocious one at that. Canelo is one of few remaining conventional boxers. He holds his hands high. They are always in front. His approach is angular. He is 'on guard ' right from the opening bell. He remains ever vigilante. The match is never over until the referee stops the bout by way of knockout, or by judges' decision if the contenders managed to go the distance. In this bout, that meant enduring 12 grueling rounds of sweat, maybe some blood, and copious doses of bone shattering physical exchanges.

Let your punches do the talking

Much to like about Chavez too. Not the pundits' favorite, the former champion, as Canelo does, also ascribes to the conventional boxing approach. You train hard; never showboat; let your punches do the talking. At 6' 1", Chavez enjoys a reach advantage; but that was about the only tale-of-the-tape measurement that favored him. He struggled to make the weight. A 164-pound weigh-in is not easy. He had to shed much relaxed muscle coming down from the super middleweight class. That was his former turf. Those halcyon days and summer victories had long since passed. At 31, Chavez was approaching his twilight. Other than going the distance before winning by unanimous decision against Dominic Britsch, Chavez, lacked the hard substance of beating solid contenders along the way as something laudable to crow about both in and outside the ring. More important a stiff right from Alvarez could send him careening to the mat and straight into retirement, voluntary or otherwise.

In the end, the bell sounded, ending the 12th and final round. As expected, Saul Canelo Alvarez came away a winner. The three judges were unanimous on their scorecards in awarding him the decision. The result has portents for U.S. President Donald Trump.

The solid takeaways are obvious. Be wise. Pick your fights on your terms. As C-I-C, you are in control; not the duplicitous MSM cowards who nonetheless are the de facto opposition party. You do not have to tee it up and win by KO in every media bout. No compelling need to hit the ball out of the park. True American patriots are still in your corner. They are legion. The people have your back. Remember, as with boxing, good governance is all about, balance, maintaining a steady rhythm, and timing. Go the distance. It aint over until the fat lady sings. Until that happens, keep up the good fight. Hit harder!