Maybe Steve Bannon, Trump's adviser, coined the term first. Bannon, if you recall did a couple months spell in the White House lawn's doghouse. Now Steve is back in the saddle. He is riding tall. By some small miracle, Bannon found grace again with C-I-C Trump. Now, you could in fact call this top strategist the White House consigliore. Whichever the case, Bannon has the President's back, now more than ever. He fully supports the President's war plans: Take down the 'resistance' and obstructionists, whenever and wherever you find them. The Trump/Bannon battle plan will move forward even if that means outing, and then drawing and quartering from within your own ranks (Rinos). In a figurative sense. 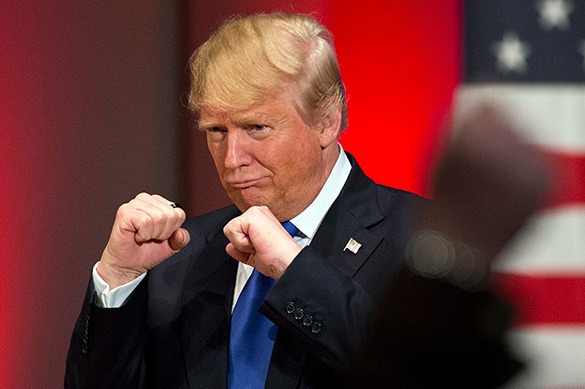 Today, 'war' is the real (feels surreal) and very palpable backdrop to 1600 Pennsylvania Avenue as well as atop Capitol Hill. While the fake news networks and the coastal elites revel in their glee as they and the phalanx of paid lobbyists on Washington's Beltway continue their folly of 'let's play leakest link', the Trump War Cabinet hunkers down.

President Trump, now six months in office feels the heat. He needs to set the fuse; he has to start a spark. Someone in his Administration has to do something. The American people are still waiting. Winning to them means much more than watching Wall Street soar to even dizzying heights. Main Street is far removed from the excesses and extravagant opulence of New York City investment banks and securities brokerage houses skyscraper tenants. Ordinary patriots need jobs. Those have to pay well. Yes, Trump reinvigorating the fossil fuels energy sector is a start. However, lighting fires under West Virginia coal plants is not nearly enough MAGA for the rest of the country. Ohio is still waiting.

There is much-needed context to explain President Trump's current stasis. Properly understood (Congress pay attention) the entire Administration and Cabinet appointees would wise up to the fact and rise to the challenge before them: the entire U.S. government and its agents not only sits on a massive swamp, the entire governance structure is filled to the very heights of power with the most vile and nefarious swamp creatures. Bannon warned Trump loyalists about this looming 'opposition party' during the campaign. "The enemy is not going to roll-over and die easily."

Case in point: Attorney General Jeff Sessions early decision to recuse himself from the 'Russian witch hunt'. President Trump was and is still correct for publicly criticizing Sessions. What was the AG thinking? Recusal means pull back; distance yourself; flee the scene; have no part of the fight; some, maybe many partisans would view his maneuver as a dereliction of duty during battle. If you prefer a boxing analogy, Sessions threw his towel in the ring, even before the bout commenced. Not what Trump or any team member would expect from a much-vaunted choice as AG. Despite all the outpouring of support from former GOP Administration officials and conservative journalists alike, that then closed ranks around the beleaguered Sessions to shield 'nice guy Jeff', President Trump remains unfazed. His position is correct. He will not stand down in his criticism. Nor should he stop.

Sessions doesn't get the obvious

What Sessions does not get is the obvious. Instead of starting firefights with lesser evils like the MS-13 gang deportations and asset seizures from pot growers, he needs to man up. AG Jeff needs to take his battle station in DC. The President and his Administration is under siege. The very existence of the Republic is at stake. The Deep State through its vassal media stooges has begun several flanking maneuvers. The losing Democrats contribute by stalling and blocking staff appointments in every department. Even more disturbing was the appointment of partisan Democrat Mueller as Special U.S. Lapdog Prosecutor (of the President). The AG's underling Rosenstein because of Sessions recusal hired biased Muller. Another 'never Trump' militant wing possibly from within the Republican Party assists this rearguard action in every regard. With the 'new Russia sanctions' bill, the traitors' plot thickens. A hog-tied President will not be able to seek peace with Russian President, Vladimir Putin.

This brings us to the current revolving White House Communications office employment doors. By appointing Rocky Balboa lookalike Tony Soprano Scaramucci as Communications Chief, President Trump hopes to send a strong signal. The Tony guy is now hunting the mutineers. He swears by his loyalty to Trump's agenda (actually Trump's promises to the people). At the podium yesterday, he said, "I will fire them all (leakers)." That is a big boast.

In corporate parlance Scaramucci is a hatchet man; it you prefer, brash Tony is a 'cleaner'. Already Mooch revealed he is not the wise, tough guy that he projects. Prime example: He gave what he thought was an 'off the record' interview to The New Yorker Magazine. That same rag by the way is an avowed Trump enemy and a 'never Trump' salacious fake news source. After Mooch finished excoriating fellow staffers Bannon and Chief-of-staff, Preibus, the trusted reporter leaked all, soiled linen and dirty pejoratives included. Of all the leaking and whizzing going around Washington and New York, Trump would hope, that this new guy at the very least knew how to bob-and-weave inside the ropes. Apparently, he did not.

What this possibly means is that an already stressed President may have to curry favors from trusted old hands. Do not be surprised to learn soon, that former campaign manager Corey Lewandoski came-acalling to the Oval Office in the middle of the night. Trump could hire him again. His mission is twofold: Ax the hatchet man. Then make AG Sessions an offer that he cannot refuse or recuse!

President Trump, much to his chagrin, is learning a tough lesson. Running the country is lot harder than building a solid corporation out of concrete, steel, and glass. Moreover, it is tough to find good help these days. On the other hand, politics, as business takes time to develop to one's own tastes. American patriots still have the President's back. Therefore, expect The Donald to fire up his base with more tweets. Low energy staffers and foe alike should expect more bow, even liver shots. Good on him!