You cannot make this up! PTDS, not to be confused with PTSD but with equally dangerous symptoms, dominates the news 24/7. It grips all continents. Almost every country's MSM blathers on about this false narrative ad infinitum. President Trump adds his own words to the phenomenon: "Everyone here is talking about this. (Nope, Trump was definitely not tweeting about the Podesta pedophile tapes)". 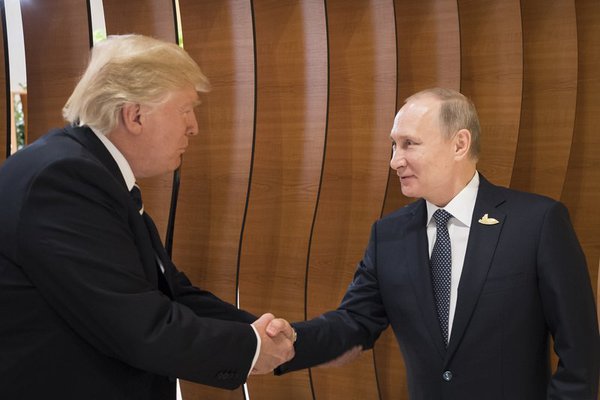 Make no mistake. This insanity initially started with the media's obsession with Putin's Russia. The Trump 'connection' came later. The rabid media mongrels only attached his component MAGA hat to the disease moniker after 'The Donald' started winning. Moreover, win he did. First, he thumped all 19 Republican challengers to win the GOP Presidential Candidacy. Next, against all odds, Trump won the biggest enchilada. By knockout, he floored Democrat challenger, Queen Hillary, and in the process became the 45th U.S. President. Throughout, Trump hardly broke a sweat. It was all too easy; his victory path was a cakewalk by any objective analysis.

From November 8th forward, Presidents Putin and Trump were conjoined, not at the hip, but on the MSM's sacrificial alter because of their shared vision for future cooperation by the world's two foremost nuclear powers. Oh the horror! Both men had to be taken out, according to the Deep State's secret manifesto. Failing to do so meant that their diabolical plans for subjugating the global population and in the process confiscating the entire world's wealth (what is left of it, but so much of it yet resides as Russian resources) would be 'deep sixed'.

In President Vladimir Putin's case, the nefarious globalists have been hunting him ever since outgoing leader Boris Yeltsin nominated Putin as his replacement. The year was 2000. Ten years earlier, the young Russian Federation barely survived the fifth column's many assaults as their Western 'partners' tried to usurp the democratically elected government's authority. Had the foreign meddlers (U.S. NGO's/State (War) Department/CIA) succeeded, Russia would have fallen. Criminal oligarchs were poised and ready to step in the power vacuum; then at the behest of their overlords, a puppet regime, which was 'agreeable' to selling state assets (at devalued ruble prices)and transferring the remaining wealth to Murica could 'go to work'. The oligarchs already benefitted from practice runs. The 1990s 'privatization' program gave them their fortunes. In stark contrast, the beholden state (if you could call it that) and the Russian peoples became poorer by the minute.

However, Russia's outlook changed for the better. The tables were turned, so to speak. Under President Putin's strong leadership and unwavering commitment to bring true democracy and transparent government, the oligarchs' era of having a lock on Russian industry and resources was over. Using the law and the power of the courts, he jailed many of them for their criminality. One of the more infamous cases involved Yukos Oil. Chair, and CEO Mikhail Kho-dork-ovsky was sentenced to a 15-year prison term for his part in racketeering that resulted in the outright theft of Russia's oil. Income tax evasion as well as proven fraud charges brought this cunning criminal down. When the other 50 or so denizen of his ilk, saw that the scales of justice had tilted against them, they fled (with their thefts) abroad. To this day, many avoid prosecution while on the lamb in Great Britain.

Hundreds were murdered. In Ukraine's Eastern Donbass region, the Luhansk and Donekst Peoples Republiks declared independence. In the South, Crimea, overwhelmingly voted for accession with Russia. In the wake of the upheaval, the Western corrupt MSM vilified President Putin for the country's ills. These lying Russophobes continue to do so right to the present.

The media addling is nowhere more intense or insanely severe than as it exists in America. During a Fox News segment, the host debated so called U.S. foreign policy 'expert', retired Col. Peters as to why American media was obsessed with the Russian collusion fake narrative. Mad Dog Peters while foaming at the mouth, instead of answering the question, launched an unintelligible tirade where he maligned Putin calling him 'Hitler' and then gave a bizarre litany of his perceived crimes: poisoning journalists, jailing political opponents/dissidents, and through his proxy in Syrian President Bashar al Assad, killing hundreds of thousands of civilians.

When his host countered by stating that the U.S. had done far worse in first Iraq, then Libya, an enraged Peters, while smirking, gave the standard response when caught in a bald-faced lie. "You changed the subject. You are deflecting." This jackal went further. He accused his host of treason; all because he posed an honest challenge. "As an expert, explain how America benefits by its continued meddling -- regime change-- in the affairs of foreign sovereign nations that pose no real threat like those of the Middle East?" Crickets! If concerned and patriotic Americans still wonder why their lyin media persists with the Russian 'collusion' mission creep story, they just need tune in on any major network both at home or abroad. In a matter of a few nanoseconds, many will switch off and then retort. "No thanks. We are stocked up on crazy. Have been for years, even decades." Their courageous President Trump already stated the obvious. Many times!