Americans rage against the machine

Turn on the TV. Tune in any channel. Chances are the U.S. major networks are saying the same thing; only difference is the amount makeup the talking heads apply to their usual spin. If you do not know what the 'big news' story is then you must not have a good cable connection; you probably shun newspapers too; you are too busy earning a living while trying to make ends meet for your family too; in turn that means you are too tired to surf the Net. Like many Americans you have given up. Politics, especially new about the mad race to seek the White House living quarters you avoid like the plague. If your friends, relatives or colleagues have been listening to the air waves, no doubt they know what the fuss is all about. 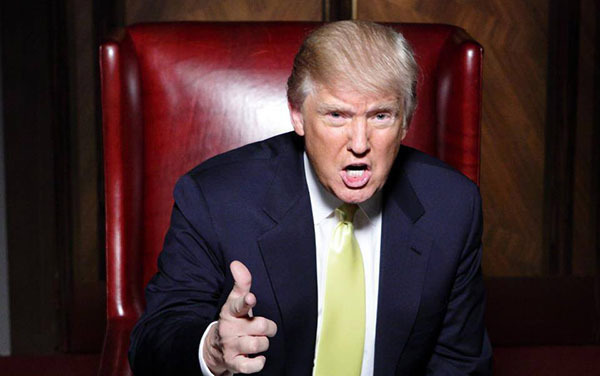 They probably have already shared their opinions (more than once) on the most profound event that has swept America in decades. They are talking about the big headline day in, day out: Donald Trump. The media, whose discombobulating is only second to that of the establishment, is in a tizzy. Together though both groups approach the behavior of a school of piranhas in a feeding frenzy. Even when there was no sign of a cut or wound in the interloper, these malcontents have resorted to drawing bad blood just so they could keep their carnivorous privileges alive. They fear 'The Donald'. Many are even loath to mention his name, never mind say something, anything good or positive about his winning message. That is the state of that nation today.

Like his candidacy or not, the facts are indisputable. Good, caring citizens have launched their own 'American Spring'. True democracy backed by real freedom has finally broken to the surface. All across the great land people of all walks have been aroused. They have awoken from their stupor. The fog of insouciance is lifting. Deceit has been unmasked. The cold truth now stares Americans in the face. Although that truth is stark, they have a real choice. The chance to break from convention, the opportunity to banish that lying adage of 'business as usual' and the willingness to forge a new direction for the good of the people is now at hand.

That is what Donald Trump offers. The people see clarity in his vision. They embrace his challenge. Nowhere in America's history has the union between a real leader and the common people been stronger; not even once. Yet the media, in particular the establishment, remain with their collective heads stuck in sand. They are in denial. Fumbling their words in an alternate reality, each tries to justify their refusal to accept the people's choice. Many say Donald Trump is a mere populist; will not be long before his budding winning flower of power fades and then wilts.

Even those esteemed fellows within Trump's own house, the RINO Republicans, have resorted to closing ranks (they claim). So far the best they could conjure was, "In the name of cronyism, we rebuke thee." Suffice to say, that the old guard GOP 'conservative' good old boys network of losers are desperate. Just today, the Party's powers to be, trotted out one of their own; a favorite son (for now) and failed 'conservative' candidate was chosen to deliver an ultimatum. Mitt Romney, who lost to Barack Obama in 2012, took to the airwaves to lay down the gauntlet. In prime time for almost an hour Mitt railed and ranted against front runner and President to be Donald Trump. The only truth in Mitt's tirade was when he misspoke: called Trump the real deal. Bear in mind that whenever Mitt happens, expect the worst. Is this not the same Mitt Romney who was caught red faced in the heat of 2012 campaign? An open mic revealed Mitt's true colors.

He demurred openly only when he thought it was safe. Calling half of the American population lazy sluggards (that computes to 165 million citizens) who lived solely for the dole check, Mitt later was forced to recant; it was too little and too late after no hint of remorse or even an apology. Romney was summarily R-E-J-E-C-T-E-D by more than half of the population in the 2012 general election. Way to go Mitt! You are a real stand up conservative! Right...

People are on to Mitt

The people are on to Mitt and his ilk. They ought to know by now who America's real enemies are; not North Korea; nor is it the destroyed state of Iraq. ISIS, though a real threat to the Middle East, does not loom large on Americans' radar screens. Their true enemies are found within their very gates: The Fed, Wall Street, and The Treasury form the real axis of evil. The military/industrial complex is the hammer to mold them and to a greater extent, the whole world into a life of servitude. On top of the apex, sits the control group: the one percenters. Many Americans know them by other names: the oligarchs, hedge fund managers and billionaire 'philanthropists'.

With that knowledge in mind the people seek change. They have one chance; one hard, last kick at the can. In Donald Trump Americans sense that they can at last slay the beast that enslaves. Trump is correct in his assessment that all of America is under siege. Washington and Congress cannot be reformed. Both must be dismantled. Trump does not want to just move the goal posts. He has much bigger plans. Together with the people's support, President Trump will construct a new ground; it will be a level playing field. In the new horizon no longer will there be a place for special interest groups, career politicians, fat bureaucrats or anyone that profits from peddling lies. The American people by the millions are on board with Trump's leadership. They see real light at the end of the tunnel. Word on the street is: Nothing can stop them or Trump from becoming great again.