Spain's Shame: The Bloodbath for Bulls; Pamplona: The Gateway of Hell 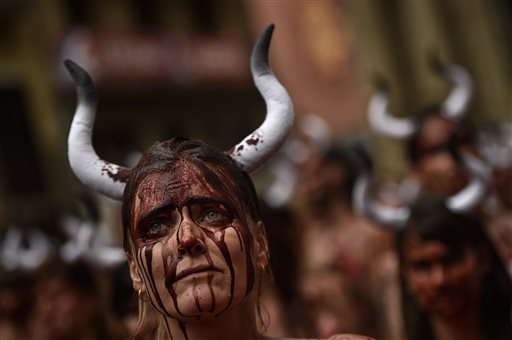 Hundreds of activists from Spain and from around the world gathered together in the main square in Pamplona on July 5 to protest against the Running of the Bulls, the San Fermin festival involving one week of barbarity in which fifty-four bulls are tortured to death in front of a braying, cheering public.

"I don't understand what is happening to me. My two brothers are with me here in this pen. They are taking us somewhere. Until this morning everything was beautiful. I lived in my field. The two-legged creatures came to feed me and brush me and sometimes they came to play with sticks. Sometimes the two-legged creatures played with me while sitting on horseback. Then this morning they came shouting and kicking us and pushed us into this vehicle. I want to go back to my field.

The vehicle is stopping now. They are opening the side. Thousands of two-legged creatures are shouting and screaming. I want to go back to my field. My brother has fallen on the stones, there's no grass here. It smells strange. They are jeering at my brother and kicking him. They are prodding us with sticks. We are all terrified. The Leader from the next fields moves to the front of our pack and says 'Follow me'. We start running, we know not where we are going, just away from this terrible place, maybe we can find our fields again.

Some two-legged creatures are running in front of us dressed in white. Others are hanging from trees and metal-trunks along the way. They are all screaming, there is hatred in their eyes, they hate us. What have we done to them? I want to go back to my field. Others are running after us from behind, hitting us with sticks and prodding us. My other brother has been cut. He is bleeding. Some two-legged creature stabbed him in his side.

Help me! I am frightened...

He is telling me, 'Help me! I am frightened!' All I can think to say is 'Run with me, my brother, we will run to our field'. 'Ai!!!!!!!!' A two-legged creature stabbed me in my neck. I am bleeding. They are kicking me. I fall on the stones. They are jeering at me. My brothers come to my side and stand beside me so I can get up. One of these creatures is prodding me in my eyes. That's it, I am going to get the bastard, take that, you horrible creature! I gore him in his side with my horn, he falls screaming and my brothers and I stamp on him as we pass over. Maybe that will make them stop.

It seems to have made them worse, now they are all screaming and hitting us. There is a wide space in front with sand instead of grass. There are thousands of these creatures inside, there's so much noise, we are all panting in terror. What is going to happen to us?

Just before this magnificent, proud animal died, they cut off his ears to serve as a trophy. One of his brothers lost his tail, also before he died, as he wretched in panic, falling to the sand in a sea of blood.

Fifty-four terrified bulls were slaughtered in this Demonic Festival de San Fermín. Whoever Fermin was, he could not have been a saint. Neither can the demons which flock to this festival every July in Pamplona, turning this city and Spain into the Gateway of Hell, dousing themselves in sangria as they stand braying in delight as the terrified animals are butchered before them, tortured to death and murdered.

Many travel from the USA, the UK or Australia to take part in this drunken act of debauchery, when the animals are herded through the streets and then driven into the bull ring where they are taunted and prodded and stabbed, then murdered by a matador. The European Union funds bullfighting with one hundred and fifty million Euros per year.

Some of the animals drown in their own blood. Others are dragged from the arena, their bodies broken and bleeding...while they are still alive.

If I were to perform such an act on those engaging in this spectacle, whether it be those in the arena, those organizing it, those watching, participating, traveling to be part of it or organizing their trip, I would be locked away in a prison for the rest of my days. How, then, can humankind allow this horrific and demonic act of butchery of living beings, or any other occasion in which animals are tortured for the entertainment of humans?