Brazil: Traitors and backstabbers bring the Giant to its knees

The impeachment proceedings against President Dilma Rousseff of Brazil are illegal, tantamount to nothing short of an attempted coup d'état, the mechanisms of an endemically corrupt, and in some cases criminal, Washington-dominated political elite annoyed by the ruling Partido dos Trabalhadores' four consecutive Presidencies. 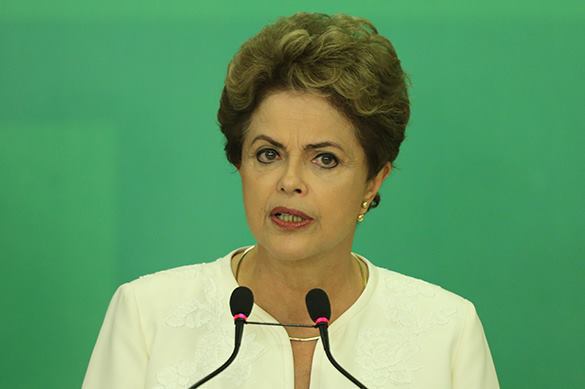 In which country can the democratically elected President be impeached two years after winning the vote in a free and fair democratic election? Brazil. After decades of social terrorism practiced by right-wing political parties, fueled by a corrupt band of criminals, rapists, murderers and fraudsters who in some cases have manned the bulwarks of Brazil's political institutions, there appeared in the Planalto Palace at the beginning of this millennium the Workers' Party, or Partido dos Trabalhadores, a shining light which heralded the awakening of a slumbering giant: Brazil.

The former joke of the international community became, with Lula and today with his successor, Dilma, a respected and important player on the world stage, with international clout, its voice listened to with reverence and respect and diligence, as Brazil stretched its muscles, at home brought millions out of poverty and into the middle class, launched social and educational programs on a scale hitherto unseen and abroad, reached markets which had formerly been places on maps. Lula, Dilma and the Workers' Party (Partido dos Trabalhadores) gave Brazil a standing above a tropical destination offering football, the Carnival and cachaça (sugar-cane spirit).

Today, and thanks to Lula and Dilma, Brazil is respected from Japan to Jamaica, from Cape Town on the southernmost tip of Africa to Casablanca in the north, in central, north and south America, from the Andes to Alaska and across the ocean, in Oceania, Asia and the Middle East.

Not so, it seems, among a gullible and volatile bunch of misfits, ungrateful, shallow and easily-led street agitators who if asked have not a clue what they are shouting for, or why, whipped up by a bunch of ambitious traitors and criminals and who claim Dilma is guilty of manipulating statistics to present a sexier second candidacy for the Presidency two years ago, circumventing fiscal law. The attorney-general, however, states that there is no case against the President, that the accusation is flawed from the start and that the entire process smacks of a coup d'état.

Investigating those who cast their votes

Has nobody in the Brazilian Congress heard the expression: "Whoever is without sin among you, let him be the first to cast a stone..."? And so let us put this to the test and investigate each and every one of those who cast their votes against President Dilma in this weekend's impeachment vote, and name and shame them in public. I repeat, each and every single "deputy" who casts a vote in favor of the impeachment of the democratically elected President of Brazil, shall be duly investigated and the details of the case against them presented in public for all to see.

If one were to take a trip into Hell, what would one find? A fair number of those who infest the Brazilian House of Representatives today, a back-stabbing, self-seeking bunch of wannabes, without a shred of decency or moral fiber in many cases, devoid of any norms of ethics or morality or good practice. The type of person you shake hands with then check you have all your fingers in place, not to mention the wedding ring.

Because of a handful of these so-called politicians, who have manipulated public opinion based upon a case drawn up by three people, aided by the mainly Euro-Gringo trash from the South who run chanting through the streets, Brazil is once again seen by the international community as a joke.

The "Golpistas" have stabbed Brazil in the back

Gone is the credibility, gone is the Kudos, gone is the goodwill and gone is the respect, which will be translated tomorrow into a lack of business, fewer contracts abroad and more unemployment and poverty at home. Brazil's right-wing elite will once again rule the roost, will sell of the country's interests at the behest of their bed-master in Washington, the super-rich will get even richer and the social programs will be old downstream as the international oil companies move into the Amazon. And that will be the end of the Brazilian dream, knifed in the back by the Brazilian Congress itself.

Do those who are starting this process this weekend care? Of course they don't because they will have their pockets stuffed full of money - dollars, not Reais - but rest assured those who are being held to account - the Brazilian electorate - has a right to know who voted for what and to know the results into the investigation into the private affairs of those who are supposed to, I repeat supposed to, represent the people.

Let us hope that the two-thirds majority vote needed to send the impeachment case to the Senate fails and that Brazil can carry on with its policies making the world a better place, catering for those in Brazil downtrodden for decades by the very people who today with to commit an outrage against Democracy.

There is a democratic ballot in two years' time. Use it!