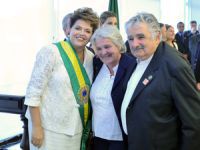 Mujica and Dilma hope for closer relations between Brazil and Uruguay

The president of Uruguay, Jose Mujica said he hoped the policy of rapprochement with Latin America, intensified by President Luiz Inacio Lula da Silva, will be followed by Dilma. "I hope that the fundamental feature of the policy of Lula remains and multiplies," he said on arriving at the Foreign Ministry for the cocktail party in honor of the new president.

"I hope that Brazil understands that it has the leadership role in Latin America. Latin Americans have to walk a lot more together than we have walked so far, with greater unity," said Uruguayan President. 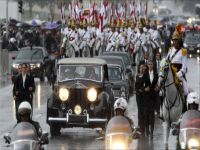 After the transfer of power at the Planalto Palace, Dilma spoke at length with Mujica and his wife, Senator Lucia Topolanski. The couple have a common point with the president Dilma: a history of armed struggle against military dictatorship. Mojica's considered Dilma's election a breakthrough for Brazilian democracy.

Ms. Rousseff's inauguration at the Brazilian Congress began with a rainy drive past 70,000 admirers lining the streets of the capital in a 1952 Rolls Royce. The rain failed to dampen the warmth and the excitement of the event. After her oath of office, she gave a 40 minute speech.

She outlined that all women should be proud that the first woman President was taking office in Brazil, and said it was, "just the beginning of a new era" for Brazil, promising to protect the most vulnerable in society and "govern for all." 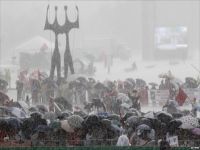 Her predecessor, Luiz Inacio Lula da Silva, was the most popular President in the history of the country and will continue to make himself available if needed. At the presidential palace, Lula removed the green-and-gold sash of the Brazilian head of state and placed it over her head as onlookers cheered, visibly touched and impressed by the significance of the gesture.

Translated and appended from the Portuguese version by: 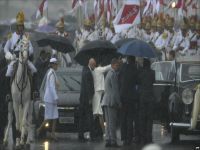 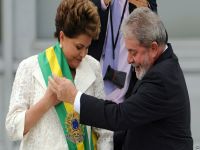