The United States needed just three more percent to get rid of Russia's BRICS ally, Brazilian leader Dilma Rousseff. Money and experience of George Soros was used along with manipulations in electronic vote counting, but it was probably a miracle that did not let that happen. Such miracles do not repeat twice, though. Russia should support loyal governments in Latin America, as they will contribute to the creation of the new world order, of which Putin spoke in Sochi. 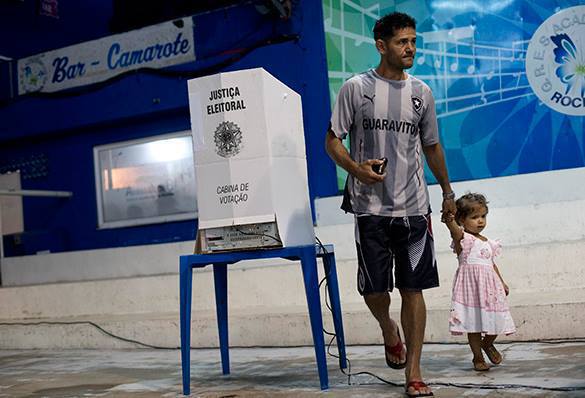 Many were surprised about the skyrocketing popularity of Aecio Neves - the candidate from the Social Democratic Party of Brazil (PSDB) - from 15 to 33.5 percent three weeks before the second round, and by 14.5 points - in the last 72 hours before the vote. Surprisingly, according to all forecasts, Neves was not supposed to partake in the second round, but he did, having lost to (who do you think?) protege of George Soros, the prime sponsor of "color revolutions," - Marina Silva of the Socialist Party (PS). She joined the election race after PS former leader Edward Campos was killed in a staged air crash. Apparently, Soros could not come to an agreement with him, Wayne Madsen, a journalist and columnist with the Strategic Culture Foundation believes. Madsen is a career officer of the US Navy, a programmer, a commentator in the field of national security policy on Fox News, as well as ABC, NBC, CBS, PBS, CNN, BBC, Al Jazeera and MS-NBC networks. In a nutshell, he is a professional who knows what he is talking about.

Betting on Marina Silva as the person who took Dilma Rousseff's 20 million votes in the 2010 election, Soros lost the first round. Then came the turn to bet on Aecio Neves. Yet, PSDM was losing all elections to the Workers' Party (PT), starting from the first victory of Lula in 2002 (first president from PT was Luiz Inacio Lula da Silva). Neves had chances, although they were slim in fair elections. Therefore, another factor was used, namely the falsification of electronic voting. The Supreme Electoral Tribunal (TSE) purchased counting machines from US-based company Diebold.

Brazilian IT-experts say that they were the machines that were used to fabricate the 2004 elections in the US, when Republican George W. Bush won against Democratic Senator John Kerry. The scandal ended with a manual recount, a criminal case against Diebold and penalties in the amount of 2.5 million dollars that the company had to pay. Brazilian bloggers say that the technical servicing for the machines was provided by the firm called PROBAN, whose leaders were included on the lists of Neves's campaign coordinators.

Central Brazilian media outlets, funded by US NGOs, were actively discrediting Dilma Rousseff. "The media were speculating on the subject of corruption in the government-controlled oil company Petrobras. This became another reason for the vote loss, - Brazilian journalist and blogger Armando Barreto told Pravda.Ru. Officials of the country's biggest companies found themselves involved in the scandal, along with commercial banks, speculating on currency exchange rates, and politicians from different parties. It was reported that about $5 billion was misused.

After Aecio Neves left Marina Silva behind and entered the second round, the media began to publish biased polls saying that Neves was ahead of Rousseff. "In a grip of emotions, he committed a gross mistake, which Dilma Rousseff took advantage of very well, - says Armando Barreto. - To please neo-liberals, he said that his future Minister of Finance will be Arminio Fraga, one of the largest financiers, a student of Brazil's mega-investor, George Soros. Arminio Fraga, in turn, said in an interview that it would be necessary to cut the powers of the National Development Bank (BNDS), Caixa Economica Bank and the Bank of Brazil. Al these institutions support social projects of the government. Furthermore, he said that strengthening the BRICS would not be a priority of his work. Obviously, voters responded to the possible curtailment of social programs, with the help of which Brazil halved the poverty level since 2003.

If Neves had won the presidential election in Brazil, one could have forgotten about Brazil as a BRICS member. The loss of such an ally would have cost too much to Russia. Obviously, no one thinks about it in Russia; no one learns the lessons from Ukraine. Why not taking advantage of the Soviet experience in Latin America? Indeed, in many countries, in Argentina for example, there is a large Russian diaspora. One must understand that pro-Russian governments in the face of Ortega, Morales, Castro, Correa and Maduro form a new world order, of which Putin spoke in Sochi last week. Why not setting up joint banks, for example?

Pravda.Ru, having the Portuguese version, faced great difficulties in obtaining decent comments related to Brazilian affairs in Russia. Experts from the Moscow State University, MGIMO, the Russian State Humanitarian University, experts from the Institute of Latin American either do not answer phone calls or provide disappointing, abstract phrases. It appears that people do not read Brazilian newspapers.

"If we want to keep "our" president in Caracas - we must do something. The same goes to Kirchner in Argentina," Tatiana Poloskova wrote in her article "Catastrophe is near: USA almost kicked BRICS out from Latin America." She continues: "It is Cuban specialists, who consult the administration of the Venezuelan president on economic issues. Why not ours?" "One should build permanent expert platforms in Latin America with the participation of Russian experts. The civil society should join the dialogue of the states. Some time afterwards, but not soon, these efforts will pay off," Tatiana Poloskova wrote.