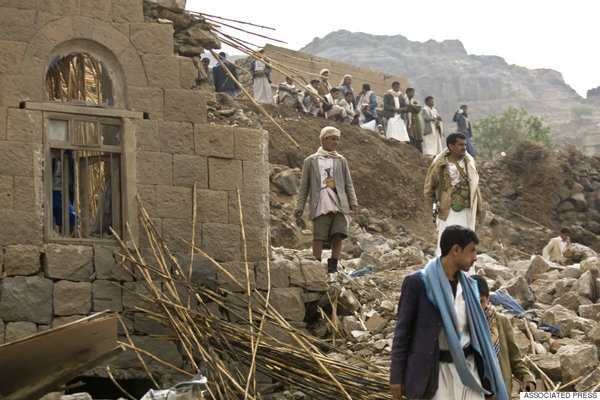 In context, the reason for the Committee's stance is related to the black farce of one arm of the UK government providing aid to Yemen, as other arms are providing the advice, aircraft and weaponry to Saudi Arabia to assist in the destruction of the ancient nation whose shores are lapped by the Red Sea, the Gulf of Aden and the Arabian Sea.

Moreover, quoting from the Report "State of Crisis: Explosive Weapons in Yemen", he pointed out that:  "The intensity of explosive violence in the country has meant that more civilian deaths and injuries from explosive weapons were recorded ... during the first seven months of 2015 than in any other country in the world." Given the Western generated carnage in Afghanistan, Iraq, Libya, and Syria alone, it is a chilling record.

In spite of this, according to the Campaign Against the Arms Trade (CAAT) which is currently threatening the government with legal action over arms sales: "The UK government has licensed £6.7 billion of arms to Saudi Arabia since David Cameron took office in 2010, including £2.8 billion since the bombing of Yemen began in March 2015."

CAAT has welcomed the International Development Committee's stance on arms sales with the fact that it has now also ended opposition to an international inquiry into allegations of alleged abuses of international law in Yemen.

"The humanitarian situation is getting worse and the UK government has been complicit in it. We agree that arms sales need to stop, but they should never have been allowed in the first place. Saudi Arabia has a terrible human rights record and has been supported by governments of all political colours for far too long", commented CAAT's Andrew Smith.

In January 2016, London Law firm Leigh Day, representing CAAT, issued a pre-action protocol letter for judicial review challenging the government's decision to export arms to Saudi Arabia despite increasing evidence that Saudi forces are violating international humanitarian law (IHL) in Yemen. At the time of writing the government is yet to respond.

Mr Smith added: "The government is always telling us how rigorous and robust its arms export system is. This is further evidence that nothing could be further from the truth. The UK has continuously armed some of the most abusive regimes in the world."

He cites Guernica, the incendiary bombings of Dresden (Hamburg must also never be forgotten) those of Tokyo, Kobe, Osaka and of course the nuclear attacks of Hiroshima and Nagasaki.

However, rather than these unimaginable horrors acting as an absolute "never again" commitment, in defiance of a swathe of international laws, the fine founding words of the UN, the International Declaration of Human rights, the Geneva Convention, they might all never have been written, signed, ratified.

Each unimaginable crime has simply been a siren call for bigger, more apocalyptic, humanity incinerating, scorched earth policy weaponry, created, ordered, and sold for use against countries posing no threat to the decimators but which have oil, gas, minerals which they wish to steal, not buy. Policies equivalent to thieves in the night, murdering their victims to steal the car, television and jewellery box. Simply criminality on a massively larger scale.

Fisher writes of the "willful brutality of our world" and asks: "Is it only occasionally that photos of young children like Alan Kurdi will rouse us to action? I hope not. Our fellow citizens caught up in the horror of armed conflict deserve better." Indeed. But Britain's approach under the Cameron regime is not only evil, but schizophrenic.

Last September, ironically on 11th September, Oxfam stated on an anniversary bringing Yemen, as other countries attacked since, it's own ongoing 9/11s:

"There is a paradox at the heart of the government's approach to Yemen. On the one hand the Department for International Development is funding efforts to help civilians caught up in the conflict, while on the other the Government is fuelling the conflict that is causing unbearable human suffering.

"The UK successfully lobbied hard over many years for a UN Arms Trade Treaty to regulate the arms trade which came into being last year. This Government has incorporated the treaty into national law, yet at the first test of the new law it has turned a blind eye to mounting evidence of potential misuse of its weapons and support."

"In 2013, David Cameron hailed the Arms Trade Treaty as a landmark agreement that would 'save lives and ease the immense human suffering caused by armed conflict around the world.' He said Britain should be proud of the role it had played in securing an agreement that would make the world safer for all."

It can only be hope that the International Development Committee's initiative bears fruit, that other countries follow and that it also results in David Cameron's mercurial mind shifts transforming in to the responsible, steady gravitas which should be a given for one of his position.