Yemen: Britain and Saudi Arabia Shoulder to Shoulder in Atrocity

"There is no flag large enough to cover the shame of killing innocent people." 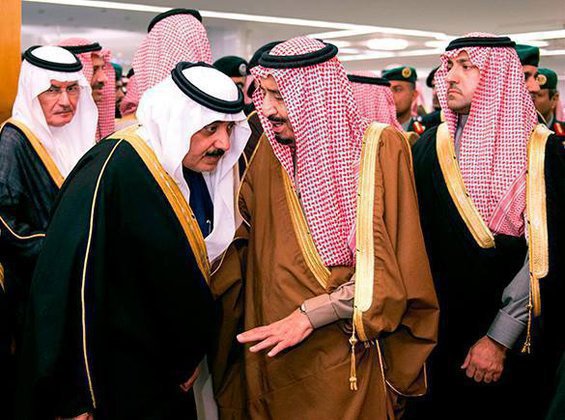 In spite of a "Letter before action sent as threat of legal action over arms export licences to Saudi Arabia increases ..."  by London law firm Leigh Day, acting on behalf of Campaign Against the Arms Trade: " ... challenging the government's decision to export arms despite increasing evidence that Saudi forces are violating international humanitarian law (IHL) in Yemen ... ", it transpires that UK military advisors are also "working alongside Saudi bomb targeters."

According to the Daily Telegraph: "British military advisers are in control rooms assisting the Saudi-led coalition staging bombing raids across Yemen that have killed thousands of civilians, the Saudi Foreign Minister and the Ministry of Defence have confirmed."

Briefing the Telegraph and other journalists the Saudi Foreign Minister, Adel al-Jubeir, said that the UK and other countries in the control centre: " ... are aware of the target lists."

The "target list" would seem to have included five attacks on schools, disrupting the remaining shreds of normality for 6,500 children. "In some cases the schools were struck more than once, suggesting the strikes were deliberately targeted", states a report by Amnesty International.

"In October 2015 the Science and Faith School in Beni Hushayash, Sana'a was attacked on four separate occasions within the space of a few weeks. The third strike killed three civilians and wounded more than 10 people." The only school in the village, it provided education for 1,200 students.

In the village of Hadhran, the Kheir School: "also suffered multiple air strikescausing extensive damage, rendering it unusable." In the same village two civilian homes and a mosque were bombed, two children were killed, their mother injured, with one man killed and another injured whilst praying in the mosque.

"The director of another school in Hodeidah city, the al-Shaymeh Education Complex for Girls, which catered for some 3,200 students described her horror after the school came under attack twice within a matter of days in August 2015 killing two people. No students were present at the school during the attack, but a man and woman were killed. (All emphases added.)

"I felt that humanity has ended. I mean, a place of learning, to be hit in this way, without warning... where is humanity ... " she asked.

The al-Asma school in Mansouriya, was destroyed in a bombing in August. However, these horrors barely scrape the surface of the criminal and humanitarian outrage.

The UK is subject to the Arms Trade Treaty which entered in to force on the 24th December 2014 and which Britain has both signed and ratified (2nd April 2014) which prohibits arms transfers: " ... if they have knowledge that the arms would be used to commit attacks against civilians, civilian objects or other violations of international humanitarian law."

Britain "have knowledge that ... arms would be used ... against civilians or civilian objects" - it is seemingly also helping to plan them, with the US also providing arms and "intelligence."

The targets for which the UK surely share responsibility also include three medical facilities supported by Medecins Sans Frontieres, the latest on 10thJanuary, a hospital in Saada in the north of the country resulting in six deaths by the 17th January, in which eight were also injured, two critically.

"This is the third severe incident affecting an MSF health facility in Yemen in the last three months. On 27 October Haydan hospital was destroyed by an airstrike ... and on 3 December a health centre in Taiz was also hit", with nine people wounded.

The exact co-ordinates of the facilities had been given to the Saudi led, British advised coalition, as they had when the US bombed the MSF hospital in Kunduz, Afghanistan on 3rd October 2015.

It seems giving details of humanitarian facilities to trained killers is interpreted as an invitation to become target practice.

Other potential war crimes have included destruction of the Al-Sham water bottling factory, killing thirteen workers about to head home from the night shift and: "markets, apartment buildings and refugee camps ... eleven people in a mosque."

Also destroyed last September was formerly one of the country's largest employers, the ceramics factory, where Amnesty International and Human Rights Watch stated they had found definitive proof a UK made Marconi Cruise Missile used in the destruction.

Amnesty also stated that they had: "found evidence of apparent war crimes in connection with thirteen airstrikes around the north-eastern Saada region, which killed about one hundred civilians including fifty nine women and twenty two children." (Guardian 25th November 2015.)

Some population centres are so comprehensively decimated that survivors wonder if they are finally safe, since there is nothing left to bomb.  Doctor Natalie Roberts, working with MSF, told the New York Times of women giving birth in caves, feeling them the safest places.

The human cost, as ever, defies imagination: "Omar Mohammed al-Ghaily, 28, sat in the center of town, near the ruins of his clothing store ... The strikes killed Seif Ahmed Seif, who owned an umbrella store. Mr. Ghaily kept Mr. Seif's identity card, maybe to return it one day to his daughter, who lives far away in Taiz. He kept coming to the rubble, he said, because he had 'no place to go.' "

Elsewhere, when locals tried to dig the barber from the rubble of his shop: "We found only his legs." Bombs being dropped range from 250 pounds to 2,000 pounds. Yet last September the US was: "finalizing a deal to provide more weapons to Saudi Arabia including missiles for its F-15 fighter jets. Yemen's population is just 24.41 million (2013 figure.)

Between March and September 2015, Britain issued thirty seven arms export licences for arms transfers to Saudi Arabia, pointed out a correspondent to the Guardian, noting: "The UK boasts that it has 'one of the most rigorous and transparent export control regimes in the world.' If this really is the case, the government needs to immediately suspend all arms transfers to the conflict and launch an investigation into how these weapons have been used."

Whilst the Ministry of Defence continues its mantra of having one of: "the most robust arms export control regimes in the world", unease is growing amongst government legal advisers, with one from the Foreign and Commonwealth Office telling the Independent (27th November 2015): "There are many Elizabeth Wilmshursts around here at the moment. Not all are being listened to", referring to the senior government legal advisor to the Foreign and Commonwealth Office who resigned in March 2003 because she was convinced of the illegality of the proposed attack on Iraq. She had worked with the Department since 1974.

It can only be hoped that some of the "many Elizabeth Wilmshursts" will publicly call time on David Cameron's government's collusion in atrocities in Yemen and that Leigh Day and the Campaign Against the Arms Trade legal initiative bears fruit. Justice for so much in the region has been long delayed.