"Today, I want to speak about the once-in-a-generation chance we have, together, to improve the way we enhance the cause of human rights, freedom and dignity." 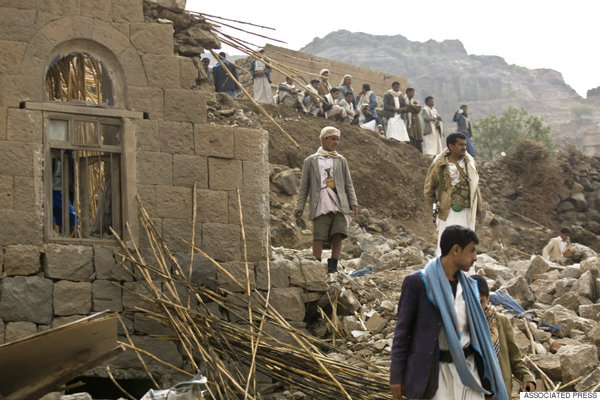 Last June, speaking in his official residence, No 10 Downing Street, Prime Minister David Cameron gave a speech on business:  "Britain has huge creative clout around the world ...From Asia to America, they're dancing to our music, watching our films and wearing our designers' latest creations", he trilled. He omitted to say "and dying under our bombs."

In December, United Nations High Commissioner for Human Rights, Prince Zeid Ra'ad Al-Hussein warned, regarding the Saudi led bombing of Yemen: "I have observed with extreme concern the continuation of heavy shelling from the ground and the air in areas with high a concentration of civilians as well as the perpetuation of the destruction of civilian infrastructure - in particular hospitals and schools ..."

Yemen's Ministry of Education's data shows more than 1,000 schools inoperable, 254 completely destroyed, 608 partially damaged and 421 being used as shelter by those displaced by the Saudi led, UK assisted onslaught. Some destroyed schools were attacked repeatedly thus they were not errors, or that obscene US dreamt up whitewash for atrocities: "collateral damage." The US also supplies "intelligence" for air strikes.

Three Medecines Sans Frontier medical facilities have also been destroyed and this month the Noor Center for the Blind was hit - twice. Abdullah Ahmed Banyan, a patient said: "People with disabilities are being struck in their residence. Around 1.30 am, two missiles hit the live-in quarters of a home for the blind. Can you imagine they are striking the blind? What is this criminality? Why? Is it the blind that are fighting the war?"

As in Afghanistan and Iraq, those other favourite targets of the US, UK and their allies, wedding parties, have again become victims. One gathering in two large tents bombed last September, killed thirty eight people, another wedding celebration attack reportedly killed one hundred and thirty. In the country's capitol, Sanaa a wedding party hall was also destroyed - what is this criminal obsession about weddings? The Chamber of Commerce was also destroyed.

Definition of war crimes include: "intentionally directing attacks against buildings dedicated to religion, education, art, science or charitable purposes, historic monuments, hospitals and places where the sick and wounded are collected ... " and: "Attacking or bombarding, by whatever means, towns, villages, dwellings or buildings which are undefended and which are not military objectives."

None of which deters the UK from joining in. Foreign Secretary Philip Hammond has confirmed to Parliament that UK troops are helping the Saudi military identify targets. He said there had been "no evidence of deliberate breach of international humanitarian law." He clearly has not bothered to do the research.

There is worse. Apart from aiding and abetting potential war crimes, the British government is profiting in eye watering sums from the human misery, deaths and destruction with arms sales to Saudi Arabia increasing by 11,000 percent in one three month period alone.

In spite of the United Nations stating that civilians are being disproportionately killed in Yemen, in one just three month period last year arms sales rose to over one Billion £s, up from a mere nine million £s from the previous three months.

"The exact figure for British arms export licences from July to September 2015 was £1,066,216,510 in so-called "ML4" export licences, which relate to bombs, missiles, rockets, and components of those items."

Angus Robertson, Leader of the Scottish National Party in Parliament is outraged, accusing during Prime Minister's Questions this week, that:

"Thousands of civilians have been killed in Yemen, including a large number by the Saudi air force and they've done that using British-built planes, with pilots who are trained by British instructors, dropping British-made bombs, who are coordinated by the Saudis in the presence of British military advisors.

"Isn't it time for the Prime Minister to admit that Britain is effectively taking part in a war in Yemen that is costing thousands of civilians lives and he has not sought parliamentary approval to do this?" (Independent, 20th January 2016. Emphasis added.)

David Cameron waffled inadequately with dismissive arrogance and supreme economy with the truth, that Britain was insuring that: " ... the norms of humanitarian law" were obeyed. Comments redundant.

Two days ago at Yemen's Ras Isa port on the Red Sea, an oil storage facility was hit killing five people. The attack destroyed the part of the compound used to load tanker trucks with refined products for domestic distribution. So now a people, many of whom, the UN has warned are facing near starvation, will face further shortages to cook what little they have and to heat

So much for Cameron's vow to: "improve the way we enhance the cause of human rights, freedom and dignity."