Even to those who do not watch closely it has to be apparent that Washington's vast disinformation machine is finally out of control, seriously awry, or desperate. The latest foray in apparent media manipulation was the claim by US "anonymous sources" that four Russian missiles targeting terrorist groups in Syria, landed in Iran. 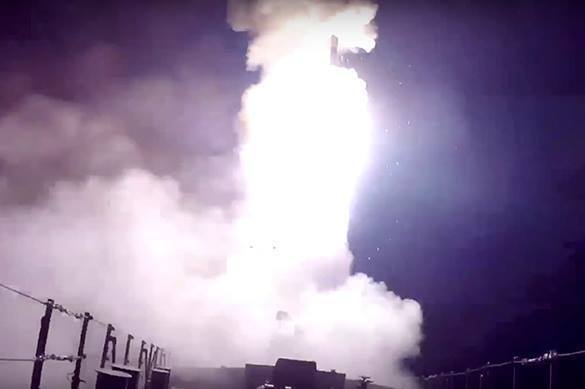 "Any time bombs are used to target innocent civilians it is an act of terrorism." (Barack Obama 15th February 2013.)

Even to those who do not watch closely it has to be apparent that Washington's vast disinformation machine is finally out of control, seriously awry, or desperate.

The latest foray in apparent media manipulation was the claim by US "anonymous sources" that four Russian missiles targeting terrorist groups in Syria, landed in Iran.

US Administrations are serial repeaters of untruths. However talking of stray missiles after bombing a Médecins Sans Frontières hospital in Kunduz, Afghanistan under a week before - when coordinates of the buildings had been confirmed to US authorities again just prior to the attack - then changing the story as to how it happened four times in less days, is skating on wafer thin ice.

As Bernard Kouchner, co-founder of MSF and former French Foreign Minister wrote: "Targeting a red cross drawn on the roof of a hospital is ... unacceptable ... a line has again been crossed." Demanding an independent investigation he stated: "It is a war crime." (Guardian, 9th October 2015.)

Former US Senate candidate, Mark Dankof, speaking to Iran's Press TV regarding US claims of stray missiles in Iran believes a full-blown psychops operation towards Russia is underway. President Putin's Ministers stating that all terrorists terrorizing the people of Syria are targets - thus including the US backed ones - might be the reason.

Dankof points out: " ... two anonymous US officials (are) a basis for this claim, who in turn are quoting unspecified, uncorroborated, and unverified 'military and intelligence information.' "

Moreover: "This is laughable ... and underscores the blizzard of lies spun by the American government, Israel, Saudi Arabia, the (Persian) Gulf Cooperation Council, and Turkey, about what has been going on in Syria, and who is clearly responsible for the 250,000 Syrian deaths, one million wounded, and 9.5 million displaced citizens of that country", he added.

"The blame is clearly on the aforementioned states, who have financed, supported, and introduced the ... extremists and terrorists into the sovereign state of Syria in an illegitimate attempt to overthrow the legitimate and recognized government  ... This is not simply evil, but illegal.

"The lies being woven by Zionist corporate media in the West about Russia are an attempt to conceal the alliance of ISIL, al-Qaeda, and affiliates with American, Israeli, British, French, and Saudi intelligence, and to conceal the obvious fact that the Russian airstrikes are hurting these terrorist groups militarily, even as they take place legally because the sovereign government ... of Syria has formally requested Russian assistance."

Dankov pointed out that on Thursday 8th October, the "White Helmets" became CNN's source for their reports on the stray missiles, the network citing them as "an independent medical team" in Syria. However:

"The truth is that the White Helmets are an invention of state intelligence agencies and NGOs who seek the overthrow the government of Syrian President Bashar al-Assad. This organization has special links to the British government in particular, and (also) to the PR firm Purpose Inc., to lobby for military intervention against Assad.

"They are closely linked to the Avaaz NGO which has the same agenda, and is linked to the Open Society Foundation of George Soros ..."

Australian born Jeremy Heimans, co-founder and CEO of Purpose Inc. ("We create new organizations and ventures to tackle issues where mass participation and collective action can unlock big change"; "Purpose moves people to remake the world") is also a co-founder of Avaaz.

However, back to "stray missiles", a story speedily silent in the Western media.  Russian General Musa Kamali told Sputnik News Agency (9th October 2015): "We have no reports of any Russian missiles crashing in Iran ... those media reports alleging that Russian missiles aiming at Syria hit Iran are blatant lies.

"If the people making those claims had any proof, they would have certainly presented it", he said. Quite.

Intended indiscriminate destruction was demonstrated, in 2003, when: "The scenes of downtown Baghdad in flames (made it) abundantly clear why US officials insisted on covering up a reproduction of Pablo Picasso's 'Guernica' at the UN Security Council during Secretary of State Colin Powell's February 5th (2003) presentation of the American case for war against Iraq." Picasso's painting commemorates a Basque town razed to the ground by a German aerial assault in April 1937 during the Spanish Civil War.

At the onset of their illegal invasion US aircraft were making bombing runs on Baghdad at the rate of 1,000 a day with many parts of the city described as "an inferno." Holocaustal war crimes of enormity. (Holocaust: "  Great destruction resulting in the extensive loss of life, especially by fire.")

Further, the US is also no stranger to stray missiles. As Time Magazine reported in April 2003, just two weeks in to America's bombardment:

" ... in the past week, three U.S. Tomahawks have gone missing in the rocky plains of southeastern Turkey en route to Iraq, several hundred miles from the war zone. Five more went astray in Saudi Arabia, and a handful of others have broken up in Iran and reportedly, Syria."

Bombing in Iraq, as everywhere "liberated" by America was criminally indiscriminate, Edward Herman cites Fallujah as a chilling example and of war crimes of enormity:

"According to Dr. Hafidd al-Dulzanni, head of the Commission for the Compensation of Fallujah Citizens, the U.S. assault (of 2004) destroyed some 7,000 houses, 840 stores, workshops and clinics, 65 mosques and religious sanctuaries, 59 schools, 13 government buildings, two electricity stations, three water purification plants, along with several railroad stations and sewage purification plants, among other things. Hospitals were an explicit target and weapons like white phosphorus and uranium-loaded projectiles were used, all adding up to massive violations of the laws of war." (Emphasis mine.)

Fallujah's illegal destruction both targeted and indiscriminate was, a metaphor for all Iraq.

On the day the US military entered Baghdad (8th April 2003) they declared war on journalists, a grave breach of the Geneva Conventions and Additional Protocol 1 and a war crime under the Rome Statute of the International Criminal Court.

First US troops directed a missile at the Al Jazeera offices in Baghdad killing correspondent Tariq Ayoub and seriously wounding several others. It should be noted that: "The attacks came amid broadcasts showing some of the mounting slaughter being conducted by US troops throughout the Iraqi capital."

The surviving Al Jazeera staff sought shelter in nearby Abu Dhabi TV which then also came under US attack. Abu Dhabi TV correspondent, Shaker Hamed issued an on air call for help reporting: "Twenty-five journalists and technicians belonging to Abu Dhabi television and ... Al-Jazeera are surrounded in the offices of Abu Dhabi TV in Baghdad." Note the "surrounded", these were seemingly no "stray" airborne missiles, the tanks were firing from near point blank range. "Kill the messenger" comes to mind.

Hamed called for relevant agencies: "to intervene quickly to pull us out of this zone where missiles and shells are striking in an unbelievable way."

In a now chillingly familiar story, also reminiscent of the MSF hospital in Kundiz: "Al-Jazeera had written to US Defense Secretary Donald Rumsfeld on February 23 giving the precise location of its office so as to avoid being targeted." Giving co-ordinates to the US military is, it appears, literally the kiss of death.

Al Jazeera was also attacked by the US troops in Afghanistan at the time of the US invasion, as Iraq, destroying their offices.

Having targeted Al Jazeera and Abu Dhabi TV, the US troops turned their attention to the Palestine Hotel, where two hundred journalists and world wide media were based. They killed Reuters correspondent Taras Protsyuk and Jose Couso of Spanish Telecinco TV. Three other journalists were injured, the hotel was extensively damaged. The US military had of course, been informed that the Palestine was the media's base.

The previous day, in Basra, Al Jazeera offices were targeted by two US missiles which failed to explode and outside Baghdad on the highway both Al Jazeera and Abu Dhabi TV cars, clearly marked as such on roof,     sides and hood were targeted, miraculously no one was hurt.

ITV journalist Terry Lloyd was murdered near Basra by the US within four days of the invasion - also in a clearly marked car. Cameraman Fred Nerac and their Lebanese assistant Hussein Osman in an accompanying car were also killed. French cameraman, Daniel Demoustier, injured in the attack said the US were firing on media vehicles: "to wipe out troublesome witnesses." Given the examples above and the continuing litany of such attacks by US troops (and British) during the occupation, he seems to have hit the nail on the head.

When it comes to war crimes the US is a serial offender. In the 1991 assault on Iraq all water purification plants were deliberately destroyed on the orders of US Central Command, as were clinics, schools, separate Education Ministry stores, media centres and radio stations were obliterated across the country. Over fifty percent of all livestock was destroyed, farms and herds, chicken farms a special target. Iraq was the world's largest exporter of dates - the US clearly regarded date palms as an enemy and bombarded great ancient, majestic groves too.

The factory that made baby milk powder was reduced to rubble and described as a "chemical weapons factory." The machinery was provided, installed and maintained by a company in Birmingham, England - and could only have been used to provide baby milk.

Also destroyed were plants which produced basic medical supplies as syringes, pain killers, antibiotics, a well worn path followed in other US bombings as a civilian pharmaceutical factory, Al-Shifa ("The Cure") Sudan in August 1998 when missiles also rained down on Afghanistan. Two US embassies in East Africa had been attacked, so as ever, proof-free Judge, jury and executioner, the US randomly bombed.

Barely noticed have been the numerous US attacks on ancient Yemen (population just 24.41 million) before their ongoing proxy attack by current Chair of the UN Human Rights Council, Saudi Arabia.

In 1999 former Yugoslavia was decimated - with stray US missiles landing in Macedonia, hitting Belgrade's media centre, the Chinese Embassy, markets, obliterating train passengers, all "liberated" from life the American way.

2011 brought involvement in Libya's destruction - another metaphor for the monstrosity of lawless might presented as benevolent saviour.

Let us hear no more phony allegations of stray missiles before the hell of the real ones have been accounted for.

I am indebted to Nicolas J. Davies, author of the eye opening "Blood on Our Hands - The American Invasion and Destruction of Iraq" for the reminder of stray US missiles.