As Prime Minister David Cameron attempts to persuade Parliament to back another illegal assault on a country posing no threat to the UK, Syria, it transpires that Britain may anyway face war crimes charges for arms sales to Saudi Arabia, arms being used to decimate civilians and civilian infrastructure in Yemen. 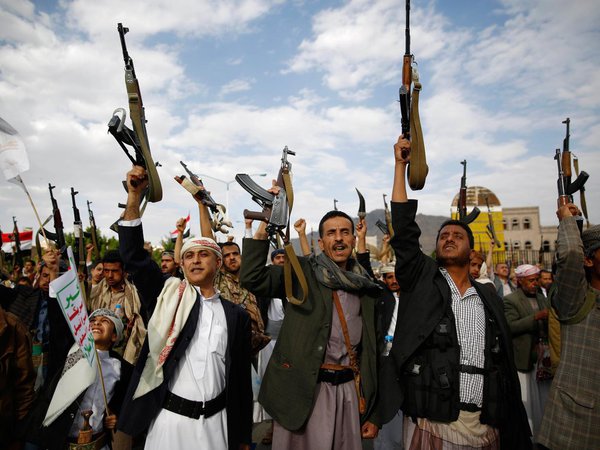 "Advisers to Philip Hammond, the Foreign Secretary, have stepped up legal warnings that the sale of specialist missiles to the Saudis, deployed throughout nine months of almost daily bombing raids in west Yemen ... may breach international humanitarian law", states a report in the Independent.

"Since March this year, bombing raids and a blockade of ports imposed by the Saudi-led coalition of Sunni Gulf states have crippled much of Yemen ... thousands of Yemeni civilians have been killed, with schools, hospitals and non-military infrastructure hit. Fuel and food shortages, according to the United Nations, have brought near famine to many parts of the country." Moreover: "The UN estimates that twenty one million people are now without basic life sustaining services and over 1.5 million are displaced. Unicef estimates that as many as ten children a day are being killed."

Given that the population of Yemen is just over twenty four million, the figures demonstrate that almost the entire population is experiencing unimaginable devastation in an onslaught on which the governments of "international community" has simply turned its back - except those bombing with US and UK supplied missiles.

In a statement laughable was the situation not so devastatingly tragic:

"... there is concern within the Foreign and Commonwealth Office that the Saudi military's attitude to humanitarian law is careless. Officials fear that the combination of British arms sales and technical expertise used to assist bombing raids on Yemen could result in the UK being hauled before the International Criminal Court on charges relating to direct attacks on civilians."

"Pot calling kettle back" comes to mind. The Foreign and Commonwealth Office and British government's attitude to humanitarian law has been arguably been beyond criminally "careless" in Afghanistan, Iraq, Libya and they now aim to attack Syria in retaliation for an action in France, committed by French and Belgian born terrorists of North African descent, some of whom had been equally terrorizing in Syria and then allowed to return home, seemingly untroubled by law enforcement agencies - as their British counterparts.

Highlighting this "carelessness", Oliver Sprague, Amnesty International's arms trade director, told The Independent: "There is a blatant rewriting of the rules inside the (Foreign Office). We are not supposed to supply weapons if there is a risk they could be used to violate humanitarian laws and the international arms trade treaty - which we championed. It is illogical for (Foreign Secretary) Philip Hammond to say there is no evidence of weapons supplied by the UK being misused, so we'll keep selling them to the point where we learn they are being used."

Last July a transfer of Paveway IV missiles was authorized from the (Royal Air Force) to Saudi, boosting the order book of arms manufacturer Raytheon UK.

The near £200 million contract: " secured the supply of hundreds of the air-launched missiles to the Saudi air force over the next two years." The Raytheon bombs will be dropped on Yemen by Typhoon and Tornado fighter jets, supplied by Britain's BAE Systems.

"The (contract) ensured that the Saudi arsenal, depleted through multiple daily bombing raids on Yemen over the past nine months, would not be exhausted." So much for "humanitarian laws."

Away from Foreign Secretary Hammond it seems there are deep concerns in parts of the Foreign Office, which are being compared to the crisis over legality during the period before the invasion of Iraq which led to the resignation of senior legal advisor Elizabeth Wilmshurs, concerned at the legality of such action.

The Independent asked the Foreign Office: "whether the UK government regarded relations with the Saudis as too important to risk by asking awkward questions about the bombing of Yemeni civilian targets." An adviser responded: "There are many Elizabeth Wilmshursts around here at the moment. Not all are being listened to."

A government spokeswoman responded, depressingly predictably, relating to a State which has beheaded more souls than ISIS:

"(Her Majesty's Government) takes its arms export responsibilities very seriously and operates one of the most robust arms export control regimes in the world. We rigorously examine every application on a case-by-case basis against the Consolidated EU and National Arms Export Licensing Criteria. Risks around human rights abuses are a key part of our assessment."

Given also the filing cabinets stuffed also with cases of alleged British human rights abuses in Iraq and Afghanistan in lawyers' offices in the UK such as Birmingham's Public Interest Lawyers and London's Leigh Day, the latter comment defies derision.

This latest issue of legal embarrassment for David Cameron's government relates to a Report by Amnesty International and Human Rights Watch issued on 25th November alleging that: "The Saudi Arabia-led coalition used a British-made missile to destroy" Yemen's Radfan Ceramics factory, "a civilian object, on 23 September, 2015."

The findings were based: "on field research and interviews with eyewitnesses at the scene."

"This strike, using a British missile ... undermines the claim of Ministers that the Saudi Arabia-led coalition's use of UK military equipment is consistent with (International Humanitarian Law) and that the UK monitors such compliance 'very carefully.' "

"The UK Foreign Secretary Philip Hammond claims he favours 'proper investigations' into possible breaches of the laws of war in Yemen. This strike provides a perfect test case - the UK should urgently press the Saudi Arabia-led coalition to open a credible investigation into this strike, as well as others that appear to have violated the laws of war," said Lama Fakih, Senior Crisis Advisor at Amnesty International.

"The latest revelations show UK policy to be both misleading and seriously ineffective. Despite multiple, well-documented cases of violations of the laws of war by the Gulf coalition in Yemen, UK Ministers have consistently refused to acknowledge this. The UK should suspend further sales of aerial munitions to coalition members pending a thorough investigation into this case, and other apparently unlawful air strikes," said David Mepham, UK Director at Human Rights Watch.

Amnesty International and Human Rights Watch examined the weapon used in the 23rd September destruction of the ceramics factory: "and identified the munition used as a PGM-500 'Hakim' air-launched missile ... manufactured by the UK firm Marconi Dynamics."

"Marconi markings are clearly visible on a component part recovered from the Sana'a strike site. Stocks of this missile are in service with the United Arab Emirates (UAE) Air Force, which has the capability to fire them from both Mirage 2000s and F-16F aircraft."

Ibrahim Ghaleb Mohammad al-Sawary, the son of one of the factory Directors, who was in the vicinity during the attack, told Human Rights Watch: " ... suddenly I heard whizzing followed by a very loud explosion. I started running away but less than two minutes later we heard the second explosion. I saw people running away from their homes - kids, older people and young people - all of them scared like us and running away without knowing where."

Ali Ahmad al-Faqih, 55, who was injured in the attack, said that he had been on a motorbike trying to check on his family who live next to the factory during a brief lull between airstrikes - not realizing the attack had not finished: "I heard a whizz and knew it was a rocket coming," he said. "I lay down and prayed out loud. I saw all my body covered in blood." He underwent surgery to remove shrapnel from his chest.

A fourteen year old girl, Elham Hussein Hussein Taher, was also injured in the attack, according to locals.

No evidence of any military usage of the factory was evident or found. The factory, opened in 1994, was the only one of it's kind in the country, employing around 330 people. It had already suffered one tragedy, having had to suspend operations in April, due to security fears from bombing for the employees - and difficulty in obtaining fuel for the machines. Now it lies mostly in ruins.

"Such attacks are serious violations of International Humanitarian Law and ... can constitute war crimes", states the Amnesty Report.

Further: "All countries have legal responsibilities under international law to control the transfer of weapons and to restrict or prohibit their transfer in certain circumstances. The UK is a party to the Arms Trade Treaty which came into force in late 2014 ... article 7 of the ATT requires that States assess the potential that the arms being exported could be used to commit a serious violation of international human rights or humanitarian law; if there is an overriding risk of this, their export shall not be authorized."

"An independent international inquiry should be established to investigate alleged violations by all parties to the conflict in Yemen, establish the facts, and identify those responsible for violations with a view to ensuring that they are held accountable."

As Prime Minister Cameron contemplates committing more war crimes in Syria, he might perhaps ponder on those he may already have on his plate and reconsider.

He may already be set to follow his admired "mentor" Tony Blair in having to consult a lawyer before he boards a flight, lest he be arrested. And as someone remarked over another atrocity in another land, the Yemen bomb seemingly "has a British accent."