NATO's prime objective is to suppress the Russians

Geoffrey R. Pyatt, US Ambassador to Ukraine, has recently paid a visit to the Donbass. The official went to the towns of Kramatorsk and Slavyansk. The foreign "master of Ukraine", as former Prime Minister Mykola Azarov said, was pleased to see the "resistance" of the local population. 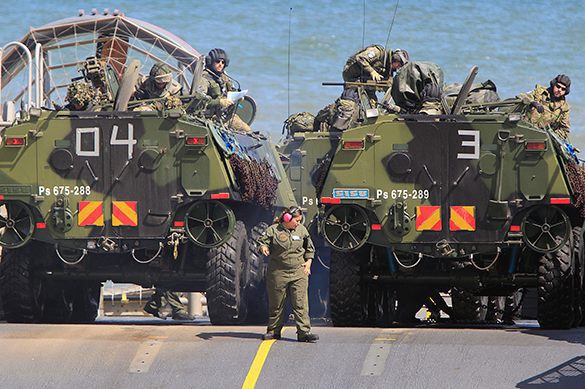 Visiting the destroyed residential buildings in the towns, Geoffrey Pyatt noted that the United States continued to provide humanitarian support to the Donbass. He did not forget to expose the financial side of this support - $62 million.

Pravda.Ru asked expert opinion from the head of the CIS Institute of Political Studies, Alexei Bychkov.

"First of all, the visit of the US ambassador to the Donbass shows that the United States want the situation in the region to be regulated. The visit came as a PR stunt so that European partners of the United States understand that the US wants the Ukrainian crisis to end," said Alexey Bychkov.

A Pravda.Ru correspondent asked the expert, if he knew something about the amount of $2 billion for the humanitarian support of the Donbass.

"This is a preliminary amount. The US intends to restore the infrastructure that has been destroyed in the course of there conflict. It is also a message to the Kremlin, meaning that the United States is willing to solve the crisis peacefully, if Russia accepts US conditions," said Bychkov.

Oddly enough, Geoffrey Pyatt has not said anything about the fact that it was the Kiev army and foreign mercenaries that destroyed most of the infrastructure in the Donbass with the use of internationally banned cluster bombs. Was it just a show?

"It was. A lot will depend on how relations between Russia and the USA will develop. The US needs to change the current state of affairs in Ukraine as the current situation is unprofitable to all sides. Yet, the US wants Russia to change its tough rhetoric towards the United States and Ukraine," the expert said.

NATO drills near Russia grow from 90 to 150 a year

Meanwhile, the number of NATO drills near Russia's borders has grown from 90-95 to 150 a year. In addition, NATO reconnaissance aircraft have started flying nine times more often, a spokesman for the Russian Defense Ministry said.

Leading expert of military-political studies at MGIMO, Mikhail Alexandrov, believes that it was Russia's decisive actions in the Crimea that frightened NATO. "The alliance has its weak points, such as the Baltic States, where the alliance supports the discrimination of the Russian-speaking population. This part of the population of the Baltic States has a legal right to defend their rights. NATO worries that its policies may lead to armed rebellions. Instead of solving the problem of discrimination of the Russian-speaking population, the alliance has started intimidating people by deploying troops there. NATO's objective is to suppress the Russians," Mikhail Alexandrov told Pravda.Ru.

In general, NATO's activities are anti-Russian in their nature. "They hate the Russian and want to crush them. This is the essence of the current policy of NATO. They deploy troops in the Baltic region and hold drills near Russian borders, and Russia understands that the alliance will be building up its military power. Russia needs to do the same in the Western direction," the expert sad.

Russia must be tough and strong in defending its interests on the international arena. If Russia makes concessions to the West, everyone will realize that Russia is weak an can therefore be destroyed.