Germany declines, loses European identity for the sake of Islam

Islam has become a part of Germany. The share of Muslims in the country has been increasing steadily. The Christian majority of Germany is indifferently watching the Muslim minority promoting its values in the German society. Germany is declining as it is losing European identity. 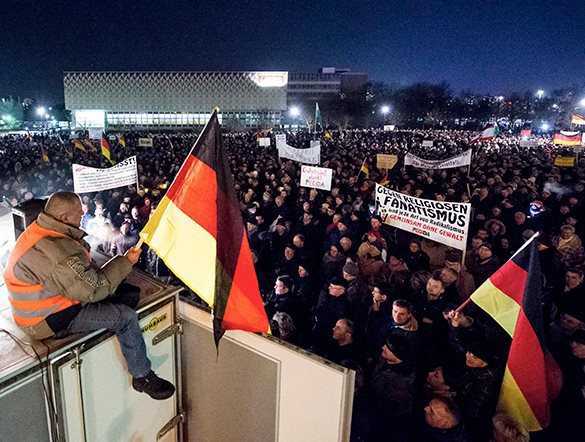 If someone in Germany starts talking about the problem of Islamization publicly, he or she always starts with the phrase "I'm not a Nazi." Such a person will be immediately regarded as an individual of racist, xenophobic beliefs, a vestige from the 1920s, when Hitler built his empire on anti-Semitism and anti-Slavinism. Allegations of Nazi propaganda in Germany is a powerful tool to end one's career.

According to estimates from the Federal Office for Migration and Refugees, there were about 4 million Muslims in Germany in 2009, or about 5% of the total population.

In the early 80s, the figure was 56,000 people. This year, Germany will consider 800,000 requests for asylum from citizens of Syria, Iraq and Africa. De facto, it goes about one million Muslims, as no one counts illegal immigrants.

In five years, the Muslim population of Germany will thus double to reach the level of ten million people, or 12 percent of the population.

German bloggers write that in many schools of big cities, Muslim students are already the majority, whereas the number of mosques grows rapidly (in the beginning of the century, there were 50 of them, and now there are 2,660 chapels and 143 classic mosques with minarets).

In menus of German kindergartens and school cafeterias, halal meat has become commonplace, and pork dishes are hard to find. Muslim girls are exempt from physical education; they do not participate in school activities, because devout Muslims do not want to take up Western values. Catholic and Protestant families have halved baptism ceremonies, because parents want to leave the choice of religion to children.

Germany starts renaming pubic events. For example, Christmas fairs are now "winter markets" or "festivals of lights." Bosses congratulate their Muslim employees  on the completion of the Muslim month of Ramadan and send them on a paid holiday leave.

Last year, the mayor of Neukölln, Heinz Buschkowsky, described the situation in the neighborhood: "When I look out of the window of the Neukölln town hall, I see something that I do not like it. Women wear long black coats and their heads are covered in an unusual fashion."

For 65 percent of German Muslims, the laws of Sharia are more important than the German Constitution.

Are the Germans comfortable with Muslim values?

The Germans, however, are told that this is far from being enough to eradicate Christian and cultural roots. At the same time, Austria and France pass the laws that prohibit the financing of Islamic religious communities from abroad. The Czech Republic and Slovakia say that the first and the most important condition for refugees from Muslim countries is the Christianization.

German media refer to such a position as the influence of right-wing forces and draw parallels with the persecution of Jews during the 1930s.

"People are not afraid of Islam, they are afraid of Islamic terrorism," said German Finance Minister Wolfgang Schaeuble. Is the minister familiar with the real state of affairs in his country?

Germany remains indifferent as traditional values ​​are being replaced with alien values. Churches turn into mosques, Christian holidays receive Muslim names, Catholic and Protestant churches refuse to baptize children. Germany may have passed the point of no return. Yet, no one admits their mistakes about it.

The only hope for Germany to remain a Christian country lies in the eastern part of the country, where the movement titled "Patriotic Europeans against the Islamization of the Occident" (PEGIDA) organizes protest actions. It turns out that in the former GDR, it is hard to zombify people with absurdities of "tolerance."

Interior Minister of Rhineland-Palatinate, Social Democrat Roger Lewentz, said in an interview with Die Welt: "In the East, migrants cause fear and xenophobia, and to a certain extent what we do in the West, is impossible there."

It is quite possible that an Islamic movement may win elections in Germany in five years or so.

According to a study conducted by the University of Leipzig, more than one third of respondents surveyed in 2014 believe that Muslims should be banned from entering Germany. In 2009, this point of view was common with every fifth respondent. Almost every other resident said that he or she felt a foreigner in their own land.

Also read: Germany to be conquered by Islam

Life without Islam: Road to hell?

Europe falls under the heel of Islamists speedily