Why doesn't Barack Hussein Obama mind his own business? This ridiculous and ridiculed figure used the G7 Summit to launch into another display of pig-headed arrogance, pig-faced insolence and hog-snouted snideness more befitting an uneducated punk, a crack-demented guttersnipe or a lowlife failure unable to make his mark. What is wrong with him? 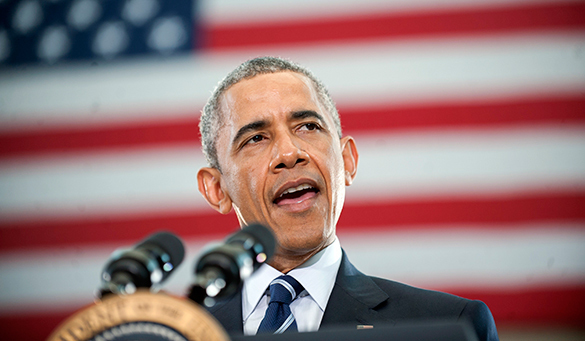 After being elected once for promising change, after being awarded the Nobel Peace Prize for promising change and failing to deliver it, once, after being elected a second time only and purely because Romney was as convincing as a second-hand car dealer operating from the back of a one-wheeled bicycle wearing a soiled raincoat that not even a homeless alcoholic would sleep on, what is Barack Hussein Obama doing these days?

Why, he is making a living out of being a pig-headed, pig-faced and hog-snouted guttersnipe, a bullheaded, mulish boar, boring and insulting the international community with his insolence, rudeness, total lack of class and pea-brained, pith-headed pettiness, nastiness and small-mindedness.

Ruling the roost over the most hated and mistrusted nation on Earth with its plethora of military bases housing rapists, misfits, nutcases and criminals halfway across the globe, the nation which stands alone in the annals of history as the only one to have perpetrated an atomic terrorist strike, twice, Barack Hussein Obama is showing his true mettle as the sh*t-headed, foul-mouthed, fork-tongued demon inside him wells up and breaks through the pencil-thin veneer. And what an unfettered, fetid stench it reveals.

In short, the President of the United States of America is more at home standing on a stage mud-slinging than acting with aplomb as a diplomat, showing as much class or less than an Irish granny bawling obscenities on a twelve-day sleepless drunken spree of debauchery while her husband has gone off to England, fruit-picking.

Barack Hussein Obama used the Greedy Seven Summit in Germany to launch childish quips and meaningless diatribes at Russia's President, the one who has increased the standard of living in his country, the one who has lowered inflation, who has strengthened the economy and who has bolstered the BRICS Bloc to the point where in a handful of years its GDP will surpass that of the G7.

Carping from the sidelines like a spineless wimp, this apology for a president, this American insult to the international community, this study in hypocrisy accused President Putin of wrecking Russia's economy and isolating Russia, when the ones imposing sanctions and measures to guarantee isolation are himself and his sickening clique of toadies in Europe.

Go to Detroit and ask for a glass of water

If he dares, perhaps President Barack Hussein Obama might like to take a trip around Detroit and ask someone for a glass of water.

As for Russia, it will continue its path reforming and modernizing its economy, it will forge closer and closer ties with the BRICS Bloc and will continue working together with the hearts and minds of the international community, using the Security Council of the UNO as the proper forum for crisis management, using debate, discussion and dialogue as its tools against the wave of Fascist Putches masterminded by a corporate pool of greed centered around Washington and its sorry, puerile, puny and petty-minded little president.