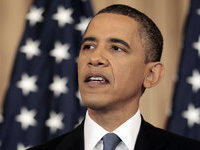 Putin in 2009 outlined his strategy for economic success. Alas, poor Obama did the opposite but nevertheless was re-elected. Bye, bye Miss American Pie. The Communists have won in America with Obama but failed miserably in Russia with Zyuganov who only received 17% of the vote. Vladimir Putin was re-elected as President keeping the NWO order out of Russia while America continues to repeat the Soviet mistake.

After Obama was elected in his first term as president the then Prime Minister of Russia, Vladimir Putin gave a speech at the World Economic Forum in Davos, Switzerland in January of 2009. Ignored by the West as usual, Putin gave insightful and helpful advice to help the world economy and saying the world should avoid the Soviet mistake.

Recently, Obama has been re-elected for a 2nd term by an illiterate society and he is ready to continue his lies of less taxes while he raises them. He gives speeches of peace and love in the world while he promotes wars as he did in Egypt, Libya and Syria. He plans his next war is with Iran as he fires or demotes his generals who get in the way.

Putin said regarding the military,

"...instead of solving the problem, militarization pushes it to a deeper level. It draws away from the economy immense financial and material resources, which could have been used much more efficiently elsewhere."

Well, any normal individual understands that as true but liberalism is a psychosis . O'bomber even keeps the war going along the Mexican border with projects like "fast and furious" and there is still no sign of ending it.  He is a Communist without question promoting the Communist Manifesto without calling it so. How shrewd he is in America. His cult of personality mesmerizes those who cannot go beyond their ignorance. They will continue to follow him like those fools who still praise Lenin and Stalin in Russia.  Obama's fools and Stalin's fools share the same drink of illusion.

Reading Putin's speech without knowing the author, one would think it was written by Reagan or another conservative in America. The speech promotes smaller government and less taxes. It comes as no surprise to those who know Putin as a conservative. Vladimir Putin went on to say:

"...we are reducing taxes on production, investing money in the economy. We are optimizing state expenses.

The second possible mistake would be excessive interference into the economic life of the country and the absolute faith into the all-mightiness of the state.

There are no grounds to suggest that by putting the responsibility over to the state, one can achieve better results.

Unreasonable expansion of the budget deficit, accumulation of the national debt - are as destructive as an adventurous stock market game.

During the time of the Soviet Union the role of the state in economy was made absolute, which eventually lead to the total non-competitiveness of the economy. That lesson cost us very dearly. I am sure no one would want history to repeat itself."

President Vladimir Putin could never have imagined anyone so ignorant or so willing to destroy their people like Obama much less seeing millions vote for someone like Obama. They read history in America don't they? Alas, the schools in the U.S. were conquered by the Communists long ago and history was revised thus paving the way for their Communist presidents. Obama has bailed out those businesses that voted for him and increased the debt to over 16 trillion with an ever increasing unemployment rate especially among blacks and other minorities. All the while promoting his agenda.

"We must seek support in the moral values that have ensured the progress of our civilization. Honesty and hard work, responsibility and faith in our strength are bound to bring us success."- Vladimir Putin

The red, white and blue still flies happily but only in Russia. Russia still has St George defeating the Dragon with the symbol of the cross on its' flag. The ACLU and other atheist groups in America would never allow the US flag with such religious symbols. Lawsuits a plenty against religious freedom and expression in the land of the free. Christianity in the U.S. is under attack as it was during the early period of the Soviet Union when religious symbols were against the law.

Let's give American voters the benefit of the doubt and say it was all voter fraud and not ignorance or stupidity in electing a man who does not even know what to do and refuses help from Russia when there was an oil spill in the Gulf of Mexico. Instead we'll say it's true that the Communists usage of electronic voting was just a plan to manipulate the vote. Soros and his ownership of the company that counts the US votes in Spain helped put their puppet in power in the White House. According to the Huffington Post, residents in all 50 states have filed petitions to secede from the Unites States. We'll say that these Americans are hostages to the Communists in power. How long will their government reign tyranny upon them?

Russia lost its' civil war with the Reds and millions suffered torture and death for almost 75 years under the tyranny of the United Soviet Socialist Republic. Russians survived with a new and stronger faith in God and ever growing Christian Church. The question is how long will the once "Land of the Free" remain the United Socialist States of America?  Their suffering has only begun. Bye bye Miss American Pie!  You know the song you hippies. Sing it! Don't you remember? The 1971 hit song by American song writer Don McLean:

"And, as I watched him on the stage my hands were clenched in fists of rage.

No angel born in Hell could break that Satan's spell

And, as the flames climbed high into the night to light the sacrificial rite, I saw...

Satan laughing with delight the day the music died

Drove my Chevy to the levee, but the levee was dry

Them good ol' boys were drinking whiskey and rye, singing...

This'll be the day that I die

This'll be the day that I die

So, the question remains:

How long will America suffer and to what depths?

Author`s name Xavier Lerma
14:50
Number of foreign mercenaries in Ukraine continues growing
14:17
Russians buy more than 50 tons of gold in 2022
13:57
Russia will not talk to Ukraine. Russia will talk to the West
13:34
USA's plan to give 20 percent of Ukraine for peace hoax
12:51
Medvedev: Ukraine as a state to be devastated, go bankrupt and be turned into colony
18:34
Biden changing strategy on Ukraine to reach diplomatic solution with Russia
13:35
USA's next step is to suppress European economies
12:28
Moscow wants to push Ukrainian troops away from Russian territories
19:55
US eco activist arrested for walking calf on Red Square
19:06
Putin speaks about the shelling of Russian regions
Ukrainian forces suffer heavy losses while trying to cut across Dnieper