I begin with the words of Rosa Luxemburg for their vision and eternal quality: "And, when better days dawn, when the working class of the world has won its deliverance then too humanity will probably celebrate May Day in honor of the bitter struggles and the many sufferings of the past". 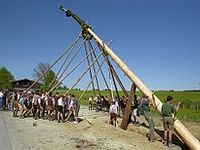 May Day, International Workers' Day is the celebration of the selfless efforts of countless men and women around the world fighting for the rights of others so that Humankind could enjoy basic universal precepts and values from birth. Many of them gave their lives to the cause, others their livelihoods. It is our duty to respect their work.

It is our duty to respect their work by ensuring that the rights they fought for are not chipped away by the natural tendency of reactionary forces in our societies to pander to the caprices of what they would consider the "crème de la crème" which floats to the top. In a word, the lobbies which now control our political systems.

And here we have, in a nutshell, the reason why today a worker's rights are to a greater and greater degree, non-existent and the fine print on the work contract, meaningless. The buzz word is "crisis" which seems to provoke a knee-jerk reaction through which the notion arises that a job is a luxury and a favor and therefore the word "timetable" is meaningless, the job description flies out of the window and salaries actually decrease while around us, prices rise.

Nobody can call that good management - indeed, if a hired manager had performance ratings like these, (s)he would be fired. But when is a bad manager never fired? Answer: When (s)he is called a politician.

And together with workers' rights we must discuss the central issue of the right to work. How can we use the adjective "successful" to describe an economic model which produces, endemically, between ten and twenty per cent of unemployed members of the workforce? Worryingly, this figure is even greater the further down the age-scale one goes and in some European countries, youth employment is sixty per cent.

This in turn means that the crisis is not only economic and financial, but rather, it is a crisis of workers' rights, becoming a social crisis downstream as growing numbers of youths feel marginalized or excluded and give up, as they realize they will never get on the housing ladder, they will never be considered for credit to buy a car, get married/find a partner and start a family. Some of them feel that it is their right to take because society has not given.

Surely, when we discuss respect for the work of those who gave their lives and livelihoods for future generations to enjoy the fruits of their selfless efforts, we must ensure that we move towards full workers' rights. This starts with the education system walking in tandem with the needs of the workforce, and this means an inclusive education system, providing free and excellent tuition for all and not the business model we see today, in which if you want a diploma you have to pay for it or come out of University tens of thousands of dollars in debt.

Here comes the "Yes but how do we pay for it?" question. Answer: NATO countries spend two thousand billion USD each and every single year on their military budgets and right now the NATO Secretary-General is touring Europe cap-in-hand asking countries to respect the two per cent of GDP military spending threshold.

Full workers' rights also involve women's rights to work and this starts with the interview where the question is asked, worded or implied: "You aren't thinking of starting a family, ARE you?" This means that if the girl dares to get pregnant, she will be fired. Sorry, her position will be extinguished. This also means equal pay for equal work and in the year 2015 the idea that women can earn up to a third less than men for the same job is risible.

The history of International Labor Day

We trace a brief outline of the history of International Labor Day from the Pagan fertility festival - Beltane - to the Roman festival Floralia, to the fight for an 8-hour working day in the United States of America at the end of the 19th century - where International Labor Day has its roots, to the internationalization of the movement. Curiously, the USA is one of the few countries which does not have a public holiday on May 1.

The beginning of May was also an important fertility festival for the Romans. They celebrated the Festival of Flora, Goddess of Flowers. The celebration of Flora was called Floralia, which lasted from 28th April to 2nd May. During the Middle Ages all over Europe, this time was celebrated with singing and dancing. People went to the forests to cut down a tree, to form a Maypole. This served as a focal point for village festivities. In some countries, people took a picnic to the fields to celebrate the fertility season and the New Year. Those who insisted on celebrating New Year at this time, instead of on January 1 as time went by, were classed as fools or liars by the newly Enlightened (who adopted the Winter date), and hence April Fool's Day.

Rosa Luxemburg tells us in her article "What are the origins of 1st May?" written in 1894, that it was in Australia where the workers' cause was joined to the old Spring celebration on this day, more precisely in 1856, when the workers of this British colony began a campaign for an eight-hour working day, making a stoppage. This was a total stoppage of work - a strike - and the action was repeated the following year. The cause of the international workers had been launched.

The unions/associations formed the Federation of Organized Trades and Labor Unions - FOTLU (November 1881), later the American Labor Federation, which at its National Convention in Chicago in 1884, proclaimed that after 1 May 1886, the working day should be 8 hours long. FOTLU announced a series of actions and strikes to apply pressure on the authorities to force them to implement the new working regime.

Meanwhile the labor movement was brutally repressed by the Pinkerton security agents and the police. When the day arrived, 1st May 1886, around 300,000 workers in 13,000 firms started to strike. Chicago was the epicenter of the labor movement and names such as Louis Lingg, Johann Most, Albert Parsons and August Spies will forever be linked with May 1. The strikes and the revolutionary atmosphere created by the various factions linked to the labor movement continued during May 2 and 3, but always in a climate of peace. However, everything would change the following day.

Due to the increasing brutality by the authorities against the peaceful labor movement, the workers decided to organize a public conference in Haymarket Square, Chicago, on May 4th. The main speaker, August Spies, addressed the crowd of workers and their families, including many children. Eye witnesses, who included the Mayor of Chicago, declared that his speech did not incite violence.

Eight "anarchist" leaders were arrested and accused of instigating violence and the jury (chosen from among the corporate elitists) found them guilty in one of the most blatant travesties of justice in history. Four were hanged, one committed suicide in his cell the night before the hanging in November 1887. The other three were pardoned six years later.

The day was never adopted as a public holiday in the USA but the workers' movement and its claims echoed far and wide, reaching the four corners of the world, where May 1 started to become the focal point for demonstrations in favor of workers' rights. International Socialist proclaimed the date International Labor Day in 1889.

In Europe, 400 delegates attended the International Workers' Conference in 1889, in which the main demand was the eight-hour day and May 1, 1890 was declared an international day of stoppage.  In 1890, May Day demonstrations were generalized and worldwide, from the USA and Canada, to Brazil, Cuba, Peru, Chile, and across Europe from Ireland to Russia, where later the USSR was to institutionalize the day as one of national holiday and celebration of the workers' cause around the world.