May Day: How far we have come?

May Day, long after America's heroic workers took up the cause of workers' rights after the Haymarket Massacre in the nineteenth century, sparking the movement which would become the international standard-bearer for the oppressed and after so many tremendous victories, where do we stand today? 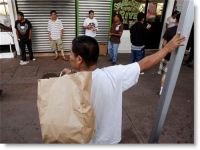 The international labour movement won some stunning successes in the face of blatant and brutal oppression, gaining the right to a fair wage, a fair timetable, safety at work, without oppression or harassment, an end to child and slave labour, a job description and later, equal opportunities for women and nationality groups.

Today, where do we stand?

The latest "crisis" has been raised as a banner by reactionary forces that would have us go back to the time before the Haymarket Massacre in 1886. In so many workplaces, inspectors fail to enforce the working timetable, employees are forced to work overtime without pay as the onus is on keeping the job in the face of some external threat which will close the company.

Wage rises, keeping pace with prices of food and utilities have become a distant memory and real buying power has slipped back a decade or more in most countries, where once again putting food on the table becomes a fight in too many cases.

Women's working rights have yet to be properly addressed, since wages are not on a parity with men and the question of maternal leave remains to be solved.

The conclusion therefore is that we are slipping backwards and if the workers of the world do not take measures and network, then the same reactionary forces that enslaved them over a century ago will do the same thing again.

History of May Day

We trace a brief outline of the history of International Labour Day from the Pagan fertility festival - Beltane - to the Roman festival Floralia, to the fight for an 8-hour working day in the United States of America at the end of the 19th century - where International Labour Day has its roots, to the internationalization of the movement. Curiously, the USA is one of the few countries which does not have a public holiday on May 1st.

The beginning of May was also an important fertility festival for the Romans. They celebrated the Festival of Flora, Goddess of Flowers. The celebration of Flora was called Floralia, which lasted from 28th April to 2nd May. During the Middle Ages all over Europe, this time was celebrated with singing and dancing. People went to the forests to cut down a tree, to form a Maypole. This served as a focal point for village festivities.

And it was in the USA that the labour movement was born, which would choose this day to focus its demands. The embryonic workers' associations and unions organized themselves during the 19th century and began to fight against deplorable working conditions - a working day of between 8 and 10 hours and in many cases in conditions of extreme discomfort and/or danger. In some industries, the life expectancy did not reach 25 years of age!

The unions/associations formed the Federation of Organized Trades and Labor Unions - FOTLU (November 1881), later the American Labour Federation, which at its National Convention in Chicago in 1884, proclaimed that after 1st May 1886, the working day should be 8 hours. FOTLU announced a series of actions and strikes to apply pressure on the authorities to force them to implement the new working regime. Meanwhile the labour movement was brutally repressed by the Pinkerton security agents and the police.

When the day arrived, 1st May 1886, around 300,000 workers in 13,000 firms started to strike. Chicago was the epicentre of the labour movement and names such as Louis Lingg, Johann Most, Albert Parsons and August Spies will forever be linked with May 1st. The strikes and the revolutionary atmosphere created by the various factions linked to the labour movement continued during 2nd and 3rd May, but always in a climate of peace. However, everything would change the following day.

Due to the increasing brutality by the authorities against the peaceful labour movement, the workers decided to organise a public conference in Haymarket Square, Chicago, on May 4th. The main speaker, August Spies, addressed the crowd of workers and their families, including many children. Eyewitnesses, which included the Mayor of Chicago, declared that his speech did not incite violence.

However, the police force decided to charge and attack the crowd; someone (and it is not clear whether it was a worker or an agent provocateur connected to the authorities), threw a bomb at the police and these responded by firing into the crowd.

The day was never adopted as a public holiday in the USA but the workers' movement and its claims echoed far and wide, reaching the four corners of the world, where May 1st started to become the focal point for demonstrations in favour of workers' rights. International Socialist proclaimed the date International Labour Day in 1889.

In 1890, May Day demonstrations were generalised and worldwide, from the USA and Canada, to Brazil, Cuba, Peru, Chile, and across Europe from Ireland to Russia.