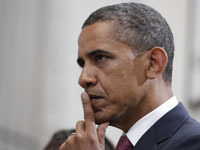 Heading into an election year adds further complications for and against more war. Will presidential aspirants anger voters advocating it? Republican hawks aren't worried. Will Obama launch it when public sentiment wants current ones ended? Don't bet against it, whatever he says.

With growing rage against the system, changing the subject may work best distracting it. At issue is hoping fear resonates more than human need and grievances.

America is a rogue terror state, an imperial predator. Unchallenged global dominance is planned. All nations it doesn't control are targeted. It was Saddam's undoing, Gaddafi's also as well as others post-WW II, including democrats, despots and others in between.

Since last winter, Syria was targeted. Externally generated violence rages. Regime change is planned. Whether or not successful, is Iran next? The fullness of time will tell.

One View from Britain

What's suggested is "appalling." At risk is "armageddon engulfing the region." Iran poses no threat whatever. It's no "two-bit dictatorship" like Iraq, but neither was Libya and other past US targets.

Waging "war on Iran would be a catastrophe," aside from issues of international law and legitimacy to attack another nonbelligerent country.

Moreover, America's post-9/11 wars "have been a gigantic historic tragedy. They have not advanced western security one jot."

Of course, doing so wasn't intended. At issue is imperial dominance. Creating enemies further advances it. Ravaging the world one country at a time is planned. Iran's turn may come sooner or later. Conquering it is another matter, besides engulfing the entire region and threatening general war.

"A virus seems to be running through the upper echelons of Washington and London." Add Israel to the mix, a longstanding regional menace. Together they comprise a rogue axis. With France, they revel in war, mass destruction, human slaughter, and for what?

Britain's been there before, building, then losing its empire. America's turn is next. Imperial arrogance is self-defeating. The same dynamic doomed past empires. None survived. What can't go on forever, won't.

Britain knows its history but didn't learn. Now it plays Bonnie to America's Clyde, or maybe it's the other way around. Either way they're junior partners. Arrogant hegemons play back seat to no one.

Perishing by the sword follows living by it unless planet earth goes first. Don't discount it given America's preemptive nuclear first strike policy. Be scared. Be very scared, regardless of whether attacking Iran is planned.

Instead, four countries were named - Cuba, Sudan (now its North after balkanization divided the country), Syria and Iran, called "the most active state sponsor of terrorism in 2010" with no evidence whatever proving it and clear proof pointing fingers at top unnamed choices.

"Iran's financial, material, and logistic support for terrorist and militant groups throughout the Middle East and Central Asia had a direct impact on international efforts to promote peace, threatened economic stability in the Gulf, and undermined the growth of democracy."

Rogue regimes beset Middle East countries. Iran's not one of them. Washington supports the worst of the bunch, including Saudi Arabia, Egypt, Bahrain, Yemen, other monarchies, and Israel the most threatening of all.

Most menacing is America's presence, its imperial policy, and decades of destructive direct and proxy wars killing millions. In contrast, nonbelligerent Iran threatens no one.

"In 2010, Iran remained the principal supporter of groups implacably opposed to the Middle East Peace Process. (Its) Oods Force....branch of the Islamic Revolutionary Guard Corps (IRGC)....cultivate(s) and support(s) terrorists abroad."

"Iran provides weapons, training, and funding to Hamas and other Palestinian terrorist groups. (Iran) assisted Hizballah" rearm after Israel's 2006 Lebanon war. Its "Oods Force provided training (and weapons) to the Taliban in Afghanistan."

"Despite its pledge to support the stabilization of Iraq, (Iran) provide(d) lethal support, including weapons, training, funding, and guidance to Iraqi Shia militant groups that target US and Iraqi forces."

For years, Washington spread the same canards with no evidence whatever proving them. Hamas is Palestine's legitimate government, not the US/Israeli-installed Fatah coup d'etat regime.

In contrast, Washington's an imperial aggressor. Libya, Iraq and Afghanistan were ravaged, illegally occupied, and colonized. So were earlier targets.

Hopefully committed global resistance will continue until its scourge on humanity ends. Free people everywhere support it. The world can't wait and shouldn't have to.

No evidence suggests any. In contrast, America and Russia have 97% of the world's arsenal and sophisticated delivery systems. Russia threatens no one with theirs. America's post-9/11 policy is preemptive first strike, including against non-nuclear states.

Israel is nuclear armed and dangerous. It, too, threatens first strikes if endangered. No one challenges its menace.

True or not, dozens of nations may consider them, for defense, not offense, in a hostile world. American and Israeli nuclear arsenals and other destructive weapons pose enormous threats - less because they exist; mostly because of stated intentions to use them.

"We assess with moderate confidence Tehran had not restarted its nuclear program as of mid-2007, but we do not know whether it currently intends to develop (them)."

"Tehran's decision to halt its nuclear weapons program suggests it is less determined to develop (them) than we have been judging since 2005."

In February 2010, America's Annual Threat Assessment of the US Intelligence Community for the Senate Select Committee on Intelligence said:

"We do not know....if Iran will eventually decide to build nuclear weapons." No evidence of an ongoing program was presented.

The Western-controlled International Atomic Energy Agency (IAEA) "plans to share with its 35 board members satellite imagery of what (it) believes is a large steel container used for nuclear arms-related high explosives tests...."

In other words, with no idea what's inside an alleged structure, IAEA head Yukiya Amano may make unsubstantiated inflammatory claims, alleging a secret nuclear weapons program.

Amano will also allege "experiments took place after 2003," despite the above US intelligence assessments presenting no evidence of an Iranian nuclear weapons program.

"The upcoming report is meant to ratchet up pressure on (Iran) to stop four years of stonewalling IAEA experts seeking to follow up intelligence of such secret weapons-related experiments."

In fact, Iran's been more than cooperative in contrast to Israel and America. Both countries prohibit IAEA or other inspections of their longstanding nuclear programs and arsenals. World leaders, IAEA heads, and their officials don't object or comment.

"partial information (and) disputed statements, reliance on anonymous sources - meaning there's no way to know what interests motivate them....But none of this obviates the (clear) need for (open, truthful) discussion" of an important issue.

Conjecture, baseless allegations, and hostile rhetoric have no place in it. Nor do threats of war or targeted strikes begging retaliation.

"Former Mossad Chief Ephraim Halevy warned against an Israeli strike on iran, saying....confrontation could be devastating for the Middle East."

Israel can't be destroyed, he said. However, attacking Iran "could affect not only Israel, but the entire region for 100 years."

MK Dan Meridor calls public discussion on Iran "scandalous....(a) devil's dance" because of what may follow.

Haaretz added that "bombing Iran's nuclear facilities is effectively equivalent to starting a war. The implications of (doing so will have) dramatic and painful (repercussions) for the entire Israeli public" and others throughout the region.

The possibility should frighten everyone. So far, only hostile rhetoric and saber rattling continue. Similar episodes occurred earlier, then subsided, hopefully, again this time. Stay tuned. Nothing's so far resolved.