Why is dollar strong vs. 18 trillion of USA's debt? 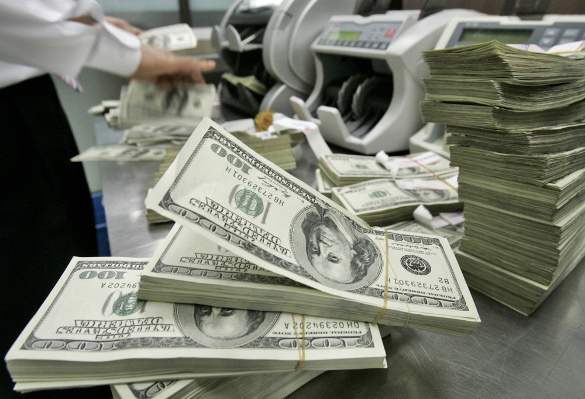 The dollar shows a steady growth with regard to other until recently stable world currencies. But is the dollar that strong? After all, the U.S. has a state debt of 18 trillion dollars and can declare a technical default at any moment. Recent rise of the Swiss franc showed that the dollar is far from being a safe haven for investors.

It is important to understand that global capital flows are extremely unstable today. Central banks all over the world have printed huge amounts of bank notes - trillions of currencies in dollars, euros, yens, etc. And these sums must generate profit or at least not to devalue.

If you have 10,000 or even 10 million of some assets at your disposal then you will keep them in a bank but if you have hundreds of billions you must find a safe place for them. Traditionally institutional investors (insurance and pension funds, investment companies of different kind) preferred to invest currency in some western government bonds and then to "leave off investments", as it were.

The situation has drastically changed today. Investors are not sure at all if they benefit from government bonds, e.g. American Treasuries. Because the U.S. government may shutdown again with an 18 trillion dollar debt and Central Bank can go bankrupt in a blink of an eye. Japan can declare default on its huge debt (over 200% of GDP), and the euro region can fall apart.

As a result, capital is trying to assess risks and switches from one major global currency to another. The one that in investor's opinion is the safest right now. Today the U.S. dollar is preferred, but it is not a vote of confidence to the American currency. It is just voting against all others, at it were.

It is just that bankruptcy of the U.S. is less expected than bankruptcy of the European Union. But situation can change in no time and not in terms of bankruptcies. The recent situation with the Swiss franc is a proof of that. Since September 2011 the Swiss National Bank (SNB) have established an exchange rate ceiling of 1.2 franc/euro. SNB purchased foreign currency at a very low rate and provided high liquidity for its banks.

But a few days ago SNB cancelled a peg with the Euro, and franc got 30% more expensive in several hours with regard to Euro and Dollar. This could never happen a year ago. Why has it happened? Because the game that included Dollar, Yen and Euro, has suddenly expanded by one player and it turned out that Dollar is not so preferred. The surge of the Swiss franc rate triggered a mini crisis on financial markets but in a few moments it made holders of the Swiss franc richer due to the growth of purchasing power of their money.

Today the Swiss can buy considerably more Spanish oranges, German beer and Italian tomatoes for 1 franc. And most importantly - real estate, gold and other assets. The next candidate to impose an "unpegged policy" is any currency that will cancel a peg with the U.S. dollar or Euro. Then happy owners of, for example, Hong Kong dollar will instantly become richer.

Who will demonopolize the U.S. dollar?

"The currencies market is very speculative now, Aleksey Sokolov, Rector of the Training Center "Finam", told Pravda.Ru. What we see is rather the decline of the Euro than growth of the Dollar. There are plenty of questions to the United States today for people to invest in the American currency so totally. If the U.S. defaults regularly then the dollar will hardly be of any value in this case. Hence, retreat to the dollar is such a very traditional approach to speculation, if anything happens then invest in the dollar, and I think if the end of the era of such an approach is not coming now, then it will in the near future".

"When the program of quantitative easing of money printing  was going full blast in the United States, we did not see high strengthening of the dollar neither against other currencies, nor against Euro in particular," Maksim Shein, chief strategist of BCS Financial Group, told Pravda.Ru.

"But as soon as the program was scrapped in the U.S., and it is still going in Europe and Japan, and their Central Banks continue to print money, then in this situation we see strengthening of the American dollar, respectively. Moreover, rates of economic growth in the United States are higher than in Europe and Japan. Accordingly, it leads to strengthening of the American currency," the expert said.

There is one more fundamental factor, it is a market one and is related to various concerns of investors. According to Maksim Shein, what happened to the Swiss franc is a pure surprise, unexpectedness. "No one knew that such decision will be made. Hence, we see heavy losses suffered by many forex companies that did not stand it. The currency market is always unpredictable. It seems to make slight fluctuations for a very long time, but sometimes there are strong swings caused by some or other events of monetary, non-monetary or political nature," the expert said.

According to Aleksey Sokolov, a currency of some small state cannot demonopolize the dollar on the currency market, currencies of states that have a large scale foreign program are more interesting in these terms. "By the way, it could be our currency - rouble, or the yuan," Aleksey Sokolov said.

It seems that the only thing to do is to break up the peg with the dollar, in this context the yuan is far more independent.