Oddly enough, Turkey's "Operation Olive Branch," which kicked off on January 20 against the Kurdish militia in Afrin (northern Syria), has not triggered any protests either from Moscow or Washington. It was only the Syrian administration that expressed its outrage on the matter, although Ankara does not normally listen to what Damascus officials say. Will the Turkish invasion to the north of Syria lead to a change in the balance of forces in the war-torn country? 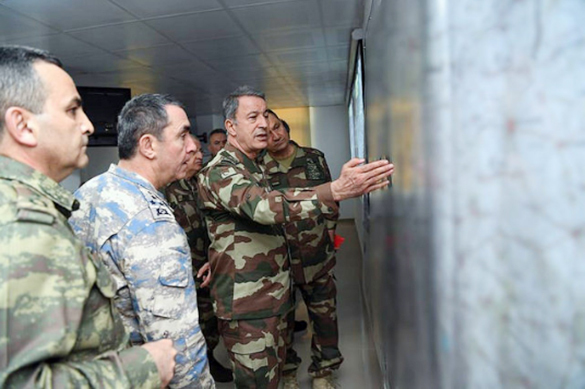 Turkey regards Kurdish self-defense groups in Syria (YPG) as the combat terrorist group of the Kurdistan Workers' Party (PKK), which is banned in Turkey. The Kurds residing in the north of Syria closely cooperate with the Pentagon as USA's allies in the struggle against the Assad regime.

However, Turkey decided to destroy Syrian self-defense troops, fearing that the latter create a springboard for the dissemination of separatism in Turkey, especially in the south-east of the country, where a large Kurdish diaspora resides. It is worthy of note that Turkish President Recep Erdogan did not ask permission for the operation either from Moscow or Washington.

"Russia has no objections to the operation," the Turkish prime minister said. "We are eliminating the Iranian concern," he added.

As for the United States, there were no objections made either, even though the two NATO allies, the US and Turkey, have had strong disagreements on the status of the Syrian Kurds. Yet, Donald Trump decided not to confront his Turkish counterpart. Was it because Turkey has attracted the Syrian Free Army to the operation against the Kurds?

US State Department spokesman Heather Nauert said later that the United States recognises Turkey's right to protect its security, but Washington urged Turkey to exercise restraint. "We urge Turkey to exercise restraint and ensure that its military operations remain limited in scope and duration and scrupulous to avoid civilian casualties," Nauert said.

Earlier, Erdogan presented the Syrian Kurds an ultimatum in an attempt to force them leave their positions within one week. After the Kurds ignored the requirement, Turkey announced the actual launch of the "antiterrorist operation" in Afrin.

By the evening of January 20, Turkish TV channels were airing the footage showing Turkish tanks crossing the border with Syria.

According to experts, Turkey's unilateral actions in the north of Syria may force the Kurds to pull out from the peace process and disrupt the Congress of the Syrian national dialogue, scheduled for the end of January in Sochi. Nevertheless, the balance of forces in Syria will not undergo serious changes. Russia still remains the dominant force in Syria, while almost the entire territory of the country is divided into "areas of responsibility" between Russia, Iran and Turkey. Even though the Pentagon has made a number of formidable warnings about the intention of the United States to stay in Syria until the complete destruction of Islamist terrorists, Washington has no chances to intercept the initiative from Russia.