The Kurds deserve their independence like no one else

The overwhelming majority of Iraqi Kurds have voted for the dream of their lifetime - independence. The outcome of the referendum about the independence of Iraqi Kurdistan was predictable - and justified. 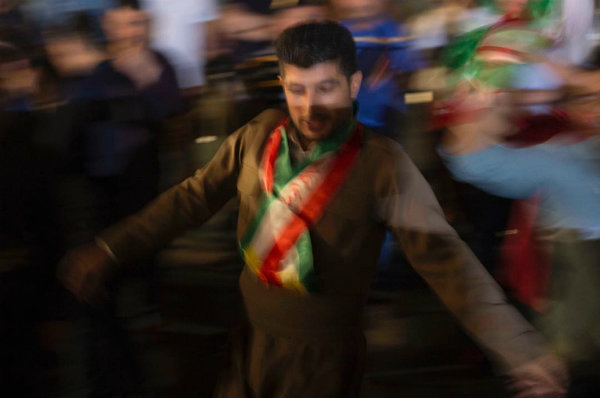 The Kurds, with weapons in their hands, could defend their ancestral lands from gangs of international terrorists and now they can rightfully administer their own destiny by determining their status and the form of government of their regions.

For some strange reason, the decision of the population of Catalonia to hold a similar referendum does not cause such outrage in the international community and neighbouring states. Yet, Iraqi rulers (the Abadi/Maliki regime), Iranian ayatollahs, Turkey's President Erdogan, and a number of other "friends" of the Kurdish people hysterically rejected the expression of the will of the people of Iraqi Kurdistan.

As a Persian proverb says, the dogs bark, and the caravans move on. There is an opportunity for the Iraqi Kurds to finally make their lifetime dream a reality - to create an independent and sovereign state. Experts admit that this is the only solution for the Kurds to protect themselves from further attacks. The capital of Iraqi Kurdistan, Erbil, may become not only an oasis of peace and prosperity, but a centre to ensure the prosperity of rich culture and millennial traditions of the entire Kurdish nation.

If central authorities of Iraq and other countries with Kurdish regions had guaranteed the Kurds  equal rights and freedoms with titular nations (Arabs, Turks, Persians), such as local self-government, the use of the Kurdish language and equal representation in central government bodies, the Kurds would have continued their existence as part of existing states.

After all, the Kurds are neither extremists, nor separatists. Due to their political, national and confessional tolerance, they can cooperate perfectly with other groups of people. Moreover, the example of Iraq and Syria shows that the Kurds could become a link and the core in future multinational states and act as mediators in resolving inter-Arab disputes and conflicts.

The authorities of Iraq, Syria, Iran and Turkey should approach legitimate demands of their Kurdish minorities with understanding and ensure their peaceful self-determination with the prospect of maintaining good-neighborly and mutually beneficial relations with them.

The 40-million-strong Kurdish people with more than a thousand years of history represent the aggregation of numerous tribal groups settled in the mountains of the Middle and Northern Zagros, as well as in the headwaters of Tigris and Euphrates rivers - the region that is conventionally referred to as Kurdistan (Kurdish country).

In the past, there used to be Kurdish princedoms, emirates, kingdoms and republics, but there are no Kurdish national states nowadays, largely because of the colonial policy of WWI victor countries. The interests of the Kurdish people were ignored when partitioning territories of the former Ottoman Empire and creating new states by France and Great Britain in 1921-1926. By the will of the great powers, the Kurdish people had found himself in the position of national minorities in Turkey, Iraq and Syria.

The leaders of these countries, like Iran, took the course towards the forced assimilation of the Kurds and their all-out oppression. The Kurdish language, Kurdish parties and public Kurdish organisations would be banned leaving the Kurds in the position of outcasts or second-class citizens. Mass deportation of the Kurds, campaigns to deprive them of their citizenship and the population of Kurdish lands by Turks, Arabs, Persians would be commonplace.

The Kurdish national movement and rebellions would be brutally suppressed even with the use of chemical weapons during the regime of Saddam Hussein in Iraq (Halabja, 1988). The Turkish authorities would call he Kurds "highland Turks" whereas the Syrian Baathist government would deprive over 100,000 Kurds of their citizenship.

Nevertheless, the Kurds managed to preserve themselves as a people. Moreover, they managed to take the rightful place in the political and social life of the host countries. Nowadays, the majority of the Kurds reside in Turkey (20 million), Iran (9 million), Iraq (6 million) and Syria (3 million). There are also Kurdish communities in the EU countries, Russia, Kazakhstan, Armenia, Georgia, Azerbaijan, Afghanistan and in a number of other countries.

The Kurds have a deep connection of national identity with a sense of love for their historical homeland. The overwhelming number of the Kurds will never give up the idea of the independent Kurdish state.

The Iraqi Kurds have progressed most in the endeavour of self-determination. In accordance with the new Constitution of Iraq, they created a sub-sovereign entity with extensive rights and powers in four northern provinces of the country (Erbil, Dahuk, Sulaymaniyah, Halabja).

The capital of Iraqi Kurdistan is Erbil. The Kurdish region has its own flag, anthem, constitution, its own set of regional laws, parliament, president, government, other legislative and executive bodies, judiciary, intelligence agencies, police, customs, border checkpoints, armed forces (Peshmerga brigades), several dozens of parties and hundreds of public organisations. All local ethnic groups and religious groups are represented in the regional parliament.

Iraqi Kurdistan successfully carries out foreign policy and foreign economic activities. There are two international airports, more than 35 foreign diplomatic missions, hundreds of foreign firms and companies, including Russia's Gazpromneft and others - all of them are accredited in the region. The Consulate General of the Russian Federation has been operating in the region for ten years already, whereas Kurdish students study at Russian universities.

During the post-Saddam period, Iraqi Kurdistan turned into an oasis of stability and prosperity against the backdrop of feuding central and southern Arab provinces. President of Iraqi Kurdistan Masud Barzani and former Iraqi President Jalal Talabani played an important mediating role in overcoming hostility between Shiite Arabs and Sunnis.

The government of Nuri al-Maliki launched a massive campaign to eradicate the Baath party in Iraq. The campaign led to extensive repressions against Sunni Arabs. Judicial and extrajudicial executions of members of the Sunni opposition, explosions of Sunni mosques, punitive actions of Shiite "death squads" - all this was widely spread.

The actions of the new Iraqi authorities triggered anti-government actions in the Sunni community and forced former servicemen and members of the Baath party to form resistance detachments and switch to guerrilla and terrorist methods of warfare against the Shiite government.

In the summer of 2014, several Sunni provinces rebelled and supported the invasion of the country by Islamic State terrorist group (banned in Russia) who came from neighbouring Syria. The hastily assembled Iraqi army proved to be incapable of repelling the aggression. The army fled in panic and abandoned its arsenals of heavy weapons and military equipment in warehouses and military camps. ISIL terrorists seized the strategically important city in the north of the country - Mosul, as well as dozens of other cities and settlements, including Sinjar, mostly populated by Yezidi Kurds.

The central authorities could not protect the population of their northern provinces from jihadist aggression and genocide. Objectively, Kurdish brigades of the Peshmerga remained the only military force that could stop the further offensive of Islamists in the north of the country.

With the support of the Western Coalition, the Kurds could liberate Sinjar and many other settlements. Thanks to successful actions of Kurdish soldiers, Mosul was liberated from ISIL terrorists as well.

Over 2,000 Peshmerga fighters gave their lives for their historical homeland and their loved ones. They showed the world the high morale, solidarity, their inherent courage and loyalty to traditions of the great Kurdish military leaders - Salah ed-Din and Mustafa Barzani.

The world community appreciated the role and importance of the Kurds in stabilising the situation in Syria and Iraq.

Nevertheless, the ruling Arab-Shiite majority in Baghdad is unable to regain the support of both the Sunni Arabs and the Kurds. There are serious reasons to expect the continuation of the armed confrontation in the country between the Shiites and the Sunnis, as well as attempts of Baghdad to resort to blackmail and military force to resolve the Kurdish issue.