Turkey suddenly backpedals on its alliance with Russia 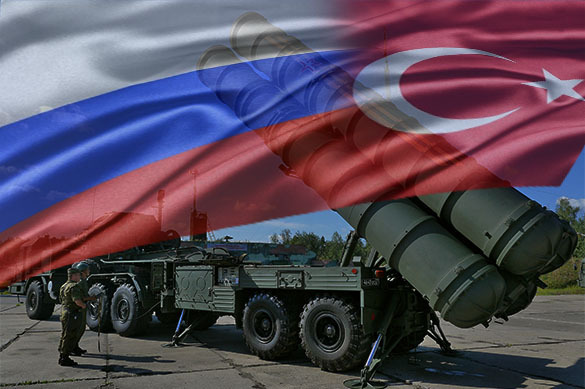 The relationship between Russia and Turkey has been quite volatile lately. Despite regular declarations from Putin and Erdogan about the need to strengthen and expand the Russian-Turkish cooperation, Ankara has unexpectedly set new rules to import agricultural products from Russia to Turkey.

From now on, Russian exporters will have to obtain special permits at the Turkish trade mission or diplomatic departments to be able to export their products to Turkey. Experts found the move as a response to Russia's recent decision to import vegetables only from nine Turkish companies, although Ankara denies such allegations.

To crown it all, Turkish Foreign Minister Mevlut Cavusoglu stated on October 9 that Ankara may rethink the contract for the purchase of S-400 anti-aircraft missile system from Russia. According to the minister, the contract will materialize only if Russia opens joint production of these complexes in Turkey.

"If Russia is negative about this, we may conclude an agreement with another country," the diplomat unequivocally stated. It is worthy of note that Turkey has already made an advance payment under the agreement.

Pravda.Ru requested an expert opinion on the subject from Viktor Nadein-Raevsky, Ph.D. in Philosophy, senior researcher at the Institute of World Economy and International Relations of the Russian Academy of Sciences.

According to the expert, the restoration of the Russian-Turkish relationship has not been completed. The process goes with difficulties, such as the import of Turkish goods to Russia, which is "not very important for Russia", but it is of paramount importance for Ankara. Turkey continues making attempts to put pressure on Russia in a hope to resolve the issue once and for all.

Russia still preserves unilateral restrictions against Turkey, and the matter is not about the imports of Turkish tomatoes only. Turkey introduced a visa-free regime for Russian tourists, but has not received a symmetrical response. The Russian Federation only facilitated the visa regime for Turkish businessmen and builders.

"There are fears in Russia that Turkey remains a transit territory for Islamists, because most of them got to Syria and Iraq via Turkey," the expert said.

As for the question of the joint production of S-400 systems, Turkey has raised it from the start, and this is their standard requirement for such purchases. "Much will depend on the volume of contracts, and whether it is going to be profitable enough for Russia. If we are going to create joint ventures, one has to regulate the process of how those products are going to be sold and where, whether Russia will have to issue special permits or Turkey will be able to sell the products of Russian-Turkish joint ventures independently."