Russian President Vladimir Putin, following the meeting with his Turkish counterpart Recep Erdogan in Ankara, said that conditions to end the war in Syria were ready. The Russian president said that Russia and Turkey succeeded in achieving an agreement on the settlement of the Syrian conflict. 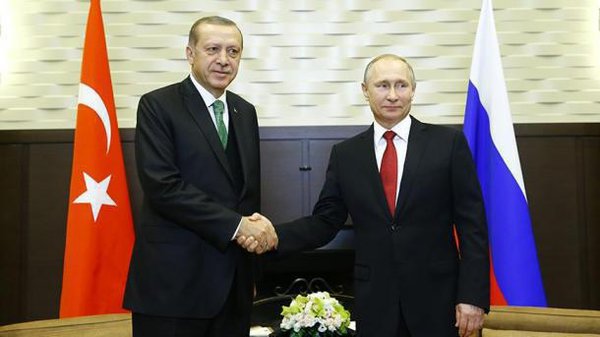 Putin had a tete-a-tete conversation with Erdogan for over 90 minutes before continuing the talks in an expanded format. "Despite difficulties, I believe that we managed to achieve a positive result, and I consider these agreements to be our joint and highly important success and the success of our friend, Mr. Erdogan," Putin said.

"In Syria, necessary conditions were created to end the fratricidal war. The final destruction of terrorists and the return of the Syrians to peaceful life, to their homes - this is a fundamental thing, which is important not only for the Syrian people, not only for the region, but for the whole world," President Putin said.

The Russian president also said that Russia and Turkey agreed on de-escalation zones in Syria. "I believe that today's meeting was very useful and very productive," the Russian leader said.

Erdogan, in turn, said that he discussed the situation in Iraqi Kurdistan with the Russian leader, in which Turkey and Russia reaffirmed their commitment to the territorial integrity of Iraq and Syria.

On the eve of the meeting of the two presidents, it was reported that Turkish President Erdogan had two highly important questions to discuss with his Russian counterpart: about the participation of Turkey in control over the de-escalation zone in Syria's Idlib and about consequences of the referendum on independence in Iraqi Kurdistan.

Erdogan said at the UN that the Turkish army would enter the de-escalation zone in Syrian Idlib and ensure the truce, an agreement on which was previously reached at the talks in Astana. The prime objective of the Turkish army is to prepare for a military operation against the Kurds in the city of Afrin, where the groups of the Kurdistan Workers' Party control vast territories.