Turkey distances itself from Russia to plunge Syria into greater chaos

After a brief truce, Syria is suffering from war again. On New Year's Eve, terrorists killed two Russian soldiers in the area of Hmeymim air base. During the first days of January 2018, several  drones stuffed with explosives attacked the Russian military in Syria. 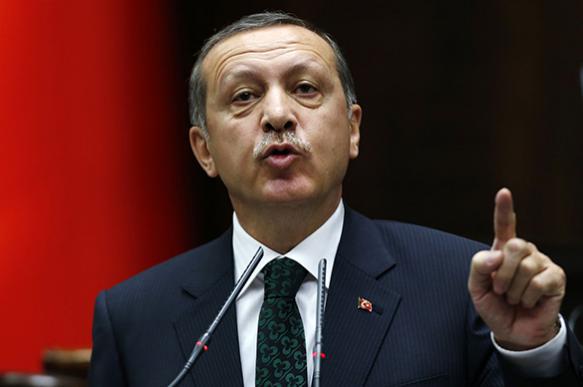 The most disturbing news came from the province of Idlib, where the troops of Bashar Assad clashed with opposition. The Syrian opposition suddenly found the support of Turkey. Ankara has thus unexpectedly cast doubts on the "Astana Troika" (Russia, Iran and Turkey). However, Turkish President Erdogan spoke against Washington, accusing the US administration of supporting Kurdish rebels in Syria.

It is the pro-American opposition, which calls itself "moderate" opposition that currently fights against Bashar Assad. The statement from Washington about the illegitimacy of the Congress of the National Syrian Dialogue, which is to take place on January 29-30 in Sochi, became a signal for the Syrian opposition to start the guerrilla warfare. The so-called "moderate opposition" announced the establishment of joint operational headquarters with the al-Qaeda's Hayat Tahrir al-Sham.

In December 2017, the Russian president announced the withdrawal of the bulk of Russia's units from Syria, but the Russian military remained on their bases in Hmeymim and Tartous that became the objects of increased attention of Syrian militants.

Officials with the Russian Defence Ministry said that the UAVs were assembled in another country.  The bombs resembled NATO's 60-mm mortar mines.

However, the main theatre of confrontation between the Assad troops and the pro-American opposition unfolded in the Province of Idlib. Ambassadors of Russia and Iran were summoned to the Turkish Foreign Ministry, where they received notes of protest because of "violations committed by the Syrian army in the de-escalation zone in Idlib." Afterwards, Turkish President Recep Erdogan held a telephone conversation with Vladimir Putin and stated that Assad's actions in Idlib put the Astana peace process in jeopardy.

Turkish Prime Minister Binali Yildirim informed Moscow that the offensive of Syrian government forces in Idlib would lead to a new wave of the refugee crisis and called on Iran and Russia to warn Damascus against further attacks.

It may seem at first glance that with its criticism of Assad's actions in Idlib, Ankara plays up to the United States in its effort to remove Syrian President Assad from power. In reality, the United States and Turkey have not been Syria's allies for long already.  The "apple of discord" for the two NATO countries is the question of the Syrian Kurds.

Even though Donald Trump has revoked his previous decision about the supplies of military hardware to the Syrian Kurds, the latter continue to receive financial and military assistance from the United States, which drives Turkey's Erdogan into a rage.

"Turkey will not allow the creation of a state formation of the Syrian Kurds," the Turkish president said. Ankara considers "self-defense forces of the Syrian Kurds" a terrorist organisation connected with the Kurdistan Workers Party, which is banned in Turkey.

Thus, while criticising both Moscow and Washington, Erdogan tries to justify Turkey's upcoming military operations against the Syrian Kurds.

The Turkish leader did not exclude a military operation in Syria's Afrin against the Kurdish Democratic Union party, which, according to Ankara, threatens Turkey's national security.

On Saturday, Ankara redeployed heavy military equipment to the border with Syria and shelled  positions of the Syrian Kurds in the area of Afrin in northern Syria.

Moscow has not reacted to Ankara's intention to conduct a large-scale operation, which has not been coordinated with the Russian side. Washington remains silent too.

As it appears, Turkey has been distancing itself both from Russia and the USA as far as the solution of the Syrian crisis is concerned. Most likely, Turkey's military actions against the Syrian Kurds will aggravate the state of affairs in the region even further.