A secret witness claims that it was a Ukrainian Su-25 aircraft that downed the Malaysian Boeing, flight MH-17, near Donetsk, in the summer of 2014. The Komsomolskaya Pravda newspaper, whose journalists interviewed the unnamed witness, said that on July 17, two Ukrainian military aircraft were shot down in the war zone, and the pilot of the third fighter jet fired an air-to-air missile into the Malaysian Boeing. 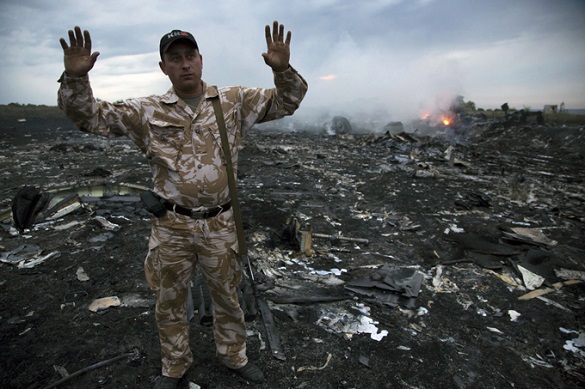 Below is the interview that the man gave to the Komsomolskaya Pravda newspaper.

"I was on the territory of Ukraine in Dnepropetrovsk, in Aviatorskoe village. There's a common airport there. Fighters and helicopters were based there. The planes would regular go on sorties, Su-25 fighter jets would bomb Donetsk and Luhansk."

"Did the planes fly operationally every day?"

"Why do you suggest that these planes could be related to the crash of the Boeing?"

"For several reasons. Out of eight planes that were based there, only two were outfitted with air-to-air missiles. The missiles were mounted on those two planes."

"Why? Were there battles in the air?"

"No, the missiles were mounted on the aircraft to cover them up in the air, just in case. Basically, the planes were armed with ammunition for ground operations, such as unguided missiles and bombs."

"The planes were flying regularly that day. They were flying the whole day, since early morning. In the afternoon, about an hour before the Boeing was shot down,  three strike fighters took off for a mission. I do not remember the time exactly. One of the aircraft was equipped with such missiles. It was a Su-25."

"Did you personally see that?"

"Where was you observation point?"

"On the territory. I won't say specifically."

"Did you have a possibility to see what was being suspended to the pylons of the aircraft? Could you confuse between air-to-air and ground-to-air missiles?"

"No, I could not mix them up. They vary in size, fin assembly, coloration and the guiding head. It is very easy to identify them. In general, after a while, only one plane returned, two others were shot down, somewhere in the east of Ukraine, so I was told. One plane returned, on which those missiles were suspended."

"Did it return without the missiles?"

"Without missiles. The pilot was very scared."

"Are you familiar with that pilot, have you ever seen him?"

"Can you say what his name is?"

"His last name is Voloshin."

"Was he alone in the plane?'

"Yes, he was. The aircraft is designed for one person."

"Vladislav, I think. I can not say for sure. He's a captain."

"So Captain Voloshin returned. Next?"

"He returned without ammunition."

"The missiles were gone?"

"So the plane returned from a mission, you were not aware about the crash of the Boeing yet, but you were somehow surprised with the absence of air-to-air missiles. How come?"

"Those missiles are not included in the basic ammunition. They can be suspended on a plane following a special order. As a rule, they tried not to fly aircraft with those  missiles, because one can not move such missiles in the air just like that. It's possible to hang only two such missiles on this plane. They have never been used before. They had been decommissioned. However, a week before the crash of the Boeing, the use of those missiles was urgently extended. The missiles had not been used for many years."

"Their resource expired. They are of the Soviet production."

"Did they hang them on the plane that day?"

"They were all the time with those missiles."

"They tried not to, as every flight reduces resource. Yet, the plane took off that day."

"And it returned without them?"

"Yes. As long as I know the pilot a little ... it is quite possible that when two aircraft were shot down before his eyes, he simply showed a frightened, inadequate reaction. He could launch the missiles at the Boeing out of fright or to revenge. Maybe, he took it for some other combat aircraft."

"Were they the missiles with homing heads?"

"Do they search for the target themselves?"

"No. It is the pilot who sets the target. Then he launches a missile, and it flies to the target."

"What else do you remember from that day? What did the pilot say?"

"Was the pilot serving there for long? How old is he?"

"Voloshin is about 30 years. His unit is based in Nikolaev. They were sent to Dnepropetrovsk. Before that, he had been to Chuguev, near Kharkov. They were  bombing Donetsk and Luhansk during all that time. And, according to a serviceman from the unit in Nikolaev, they still continue to do it."

"Did the pilots have a good combat experience?"

"Those who were there they were experienced. The Nikolaev unit was the best unit in Ukraine in 2013, I think."

"Did Pilots try to discuss the story of the Boeing?"

"All attempts to discuss it would be immediately suppressed. The pilots, they would interact with each other, and they were so ... proud."

"What happened to this pilot, Captain Voloshin, after they learned about the Boeing?"

'They continued the sorties. The pilots were the same."

"Let's try to simulate events. How could they develop? Three aircraft flew on a combat mission. They found themselves in the zone, in which the passenger Boeing was flying. Two aircraft were shot down. Captain Voloshin got nervous and scared, and perhaps he took the Boeing for a combat aircraft?"

"Maybe. The distance was large, so he could not see what kind of plane it was exactly."

"From what distance can those missiles be launched?"

"What about the speed difference between a combat aircraft and a Boeing?

"It doesn't matter: a missile has a pretty good speed. A plane can - at its maximum altitude of 7,000 meters - easy fix the target. The flight range of the missile is more than 10 kilometers."

"At what distance does this missile explode? Can it hit a target and then explode?

"It can, depending on the modification. It can literally fly into the body and it can also explode at a distance of 500 meters."

"We worked at the crash site of the Boeing and noticed that fragments hit the body of the aircraft шт a very concentrated way. It looked like it exploded just two meters away from the Boeing."

"There is such a missile, it explodes like shrapnel."

"Ukraine stated that they had no sorties that day. We checked various sources on the downed aircraft. Ukraine denies that its warplanes were flying that day."

"I know about it. Ukraine also said that those two aircraft were shot down on December 16, not on December 17. They repeatedly changed the date. But in fact, sorties would be conducted daily. I saw it myself. There were sorties made even during the time of the truce, however, less often."

"What weapons were there on the aircraft at your airport? Were phosphorous bombs used or incendiary mixtures? The Ukrainian artillery was using them actively on the ground."

"I did not see phosphorous bombs. They used volume-detonating bombs, though."

"Yes, they are. The bomb was designed for Afghanistan. It was banned under some convention, I do not remember exactly which one. The bomb scorches everything out."

"Were they mounted on aircraft and then used in combat action?"

"Yes. There were also banned cluster bombs. An aviation cluster bomb, depending on the size, can strike very large targets. To completely destroy a stadium, one bomb is enough."

"Why were they using such weapons?"

"They were following orders. Whose orders exactly remains unclear."

"What the main purpose of such weapons - intimidation?"

"No - maximum destruction of manpower."

"Why did you go to Russia ad decided to tell us about it? You're not the only witness!"

"The Security Service of Ukraine and the National Guard of Ukraine intimidated all. People can be beaten for every careless word, or jailed for any insignificant suspicion of being sympathetic to Russia or to the militia. I was against the "anti-terrorist operation" from the start. I do not agree with the policy of the Ukrainian administration. A civil war is a wrong way to go. Killing your own people is not normal. I do not want to stay in Ukraine to be involved in all that."