One of the most famous female politicians of the second half of the 20th century, Margaret Thatcher, globally known as “Iron Lady,” celebrated her 80th anniversary on October 13. Lady Thatcher played an enormous role in the history of both world politics, and relations between Great Britain and the Soviet Union. Furthermore, the former British prime minister became the incarnation of the English dream as she changed the general attitude to women in politics. 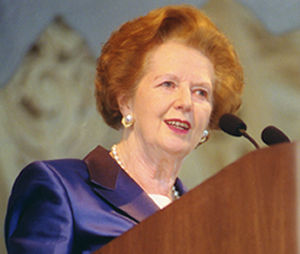 The would-be head of the British government, Margaret Hilda Roberts, was born in a small town of Grantham, north off London, in 1925. Her family owned a small grocery store, which subsequently laid the foundation of Lady Thatcher's enterprising activities. The ambitious girl decided not to follow her parents' fate, who always lived in a small provincial town. However, she absorbed the conservative spirit of her hometown and brought it into her career in big politics.

Margaret Roberts graduated from Oxford and took two degrees in chemistry and law. When a student, she became a member of the university's organization of the Conservative Party, where she obtained her first political experience.

In 1951 Margaret Roberts married Denis Thatcher, a man from a wealthy family. Lady Thatcher exercised her iron character traits during the first years of marriage already. She decided not to give up her second higher education and received the bachelor's degree in law.

Margaret Thatcher appeared in the world of big politics in 1959 as a member of the Conservative Party, of course.  She worked her way into the House of Commons of the British Parliament: her seat in the parliament gave rise to her sweeping political career immediately. In 1961, Thatcher took the position of the parliamentary secretary of the ministry for pensions and national insurance. By age 44 she got settled into the "statutory woman's" place in the Cabinet as Education Minister, and that looked like the summit of her career.

In 1970, Thatcher became Secretary of State for Education and Science. When she was forced to cut the education budget, she decided that ending free milk in schools would be less harmful than other measures. Thatcher's decision, however, sparked a massive national protest; people started calling her “Maggie Thatcher, milk snatcher.”

Heath's government failed to improve relations with trade unions and was eventually forced to resign in 1974.

In 1975 she challenged then Premier Edward Heath for the Tory leadership simply because the candidate of the party's right wing abandoned the contest at the last minute, Time.com writes. Thatcher stepped into the breach. When she went into Heath's office to tell him her decision, he did not even bother to look up. "You'll lose," he said. "Good day to you." However, she successfully challenged Heath for the Conservative leadership in 1975. When Margaret Thatcher won a series of general elections in Great Britain, mastered the art of public speech, beat her Labour Party rival and became the longest-serving Prime Minister of the 20th century. About 44 percent of the British voted for Margaret Thatcher in spite of the fact that the majority of people hated her only a short time ago.

Margaret Thatcher launched extensive activities in the field of home politics of Great Britain: she started with cutting taxes and closing unprofitable enterprises. The new British premier was shutting down one coal mine after another on the assumption that coal had become an outdated type of fuel in the century of immense technological progress. Thousandsof miners wenton strikes in Great Britain nationwide: several miners died in the largest hunger-strike of 1984, but Thatcher did not agree to compromise. Soviet journalists nicknamed the British primer the “Iron Lady” – the nickname became the global association of Margaret Thatcher very quickly. Nevertheless, Margaret Thatcher managed to extricate the country from the economic depression of the end of the 1970s.

The Iron Lady became a sworn enemy of the Irish Republican Army (IRA) in the beginning of the 1980s. She did not succumb to requirements of thousands of Catholics to release several prisoners of IRA's political wing, the Sinn Fein party. Thatcher firmly stated in 1981 that there could be no concessions whatsoever made for terrorists. She did not retreat a step in 1984, when IRA gunmen attempted to assassinate her. The thought of negotiations with the administration of the Irish Republic has never occurred to her.

All the drawbacks of Thatcher's home policies were minimized with the Iron Lady's enormous success on the international political arena. Margaret Thatcher became the first on the list of rightist politicians along with such bright figures as  Ronald Reagan, Helmut Kohl and many others. US President Reagan would often consult Thatcher regarding not only international, but even US affairs. As a result, Thatcher returned the feeling of living in a great nation to the British people.

It became especially clear in the autumn of 1982, when the Argentine Navy landed on the Falkland Islands. Thatcher ordered the British naval commandto send troops thousands of kilometers afar, towards the islands, and Argentina was forced to retreat in the face of the British military power. Thatcher became extremely popular in Great Britain after such an accomplishment, although all Latin American states developed a strong aversion to the “Iron Lady.”

Margaret Thatcher knew when she needed to exercise her political flexibility. She strongly refused to accelerate the European integration and create the pound-euro peg (the prototype of the joint European currency, to be more precise). However, she did not pull Great Britain out of the European Economic Community. She harshly criticized the USSR and invariably supported Ronald Reagan in all of his anti-Soviet initiatives. However, it was Margate Thatcher, who met USSR's President Mikhail Gorbachev first and gave everyone a hope that the tense Soviet-Western opposition would be eased considerably when she said: “I like Mr. Gorbachev. We can do business together.”

Thatcher's achievements in foreign politics allowed her to accomplish incredible success in Great Britain: she took the office of the British Prime Minister for the third term in 1987, which happened for the first time in history. It seemed that she would be ruling the British nation eternally. Thatcher resigned in 1990 after a very unpopular initiative of hers to introduce the capitation tax, the sum of which would be equal for poor and wealthy citizens alike.

Nowadays the British people have rather warm memories of Thatcher's years of power. Great Britain's status of the one of the strongest and most developed superpowers has been retrieved owing to Iron Lady's political art. Margaret Thatcher was a very willful politician who would never call the US White House for daily consultations. She was not afraid of anything either inside or outside Great Britain. It is clear that Thatcher's successors, John Major and Tony Blair, need to learn a lot of Iron Lady's experience in politics.