Tony Blair managed to prove that liberal schemes, which do not enjoy much popularity in Continental Europe, can be rather efficient

Great Britain became the leading state amid its equals in the beginning of July, when it took the chairmanship in the European Union. The EU currently experiences the most serious crisis in recent years. British Prime Minister Tony Blair is said to be one of the people, who made the crisis occur. There is obviously a certain amount of truth in such accusations. A critical period, however, gives an ambitious leader an extra incentive to exercise his political abilities. 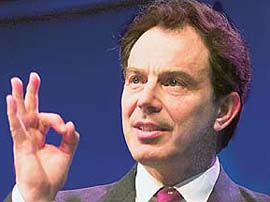 The problem to create a steadfast base for the future development of the European Union is one of the most important goals, which Europe has to solve at the moment. Tony Blair seemingly has very few chances to succeed at this point.

The discussion of the above-mentioned problems has already formed a vicious circle. The aspiration of the British prime minister to either cancel or cut huge subsidies assigned from the European budget to French agriculture runs across persistent requirements of the French to abolish the so-called British discount, which Great Britain obtained during Margaret Thatcher's era.

One may point out several factors, which may seem to be rather beneficial for Blair. The head of the British government is absolutely right, when he says that providing incredibly high subsidies in farmers' support in the epoch of post-industrial high-tech economy is rather anachronistic, to say the least. Moreover, Blair stated that Britain would agree to cancel the British discount if the EU stopped allocating agricultural subsidies to France. Finally, Germany is expected to hold prescheduled parliamentary elections in September: French President Chirac may thus lose his staunch ally, German Chancellor Gerhard Schroeder. It goes without saying that the German Christian and Democratic opposition will not take France's side in the event it comes to power.

The achievements of the British economic policy during Mr. Blair's stay in the office can be viewed as the trump card of the prime minister. Tony Blair managed to prove that liberal schemes, which do not enjoy much popularity in Continental Europe, can be rather efficient. One may recollect the now-forgotten decisions, which were made in Lisbon in 2000. The decisions were meant to intensify the development of scientific branches of the European economy to make the EU a competitive international organization in global scale. The head of the British government will most likely draw his colleagues' attention to those suggestions again. In other words, Great Britain will aim its efforts to liberalize European economic policies during the forthcoming six months of its EU chairmanship.

The possibility of the further expansion of the European Union is another issue of vital importance for Europe.  Blair and members of his administration stand for developing the dialogue with Turkey. Negotiations will be possible if Ankara meets all requirements needed for its EU membership.

To all appearance, Europe and the USA will be strengthening their relations until the end of the current year: Blair is known for his devotion to the British-US partnership. It also means that China will lose its last chances to lift the European embargo on arms deliveries from the Old World.

As for the EU's major problem of recent days, the ratification of the European Constitution, the matter will depend on Tony Blair's successful activity during the upcoming six months. If the issue of the integration unification becomes more prestigious internationally, if the economic situation in the EU becomes more favorable for its citizens, especially for those who reside in the founding states of the union, another attempt to ratify the constitution may bring positive results.