IRA's disarmament does not mean peace in the Republic of Ireland 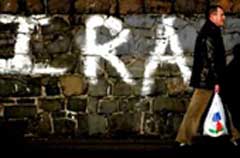 The news has come from Eire that one of the most notorious terrorist groups in Europe Irish Republican army (IRA) was laying down arms. This means that the terrorist war it had been leading for 36 years against the official London has finished. It is going to be replaced complicated but peaceful political process. Tony Blair said that the time when all the hopes were becoming true had come. It is the time when peace will replace war in Ireland and terror will cede to politics.

IRA was formed in 1969 as an armed branch of Catholics from the Sinn Fйin party who were fighting for uniting of the Northern Ireland with the Irish Army. It is responsible for dozens of large terrorist acts in Eire itself as well as in different cities of England. London, Manchester, Birmingham and other large cities of the country have fallen victims of its attacks more than once. The largest of the terrorist acts were bombings in Belfast in 1993 with ten people killed and in Omagh in 1998 when 29 people were killed. After that IRA through the international mediation decided to stop terrorist acts.

Although IRA's history starts in 1969 the history of Irish Catholics fighting against England lasts for centuries. In the 12th century the English colonization of Ireland began. In the 17th century during the English revolution one of the most respected political figures Oliver Cromwell harshly stifled a rebellion of the Irish, many of whom were put into irons and sent to the USA as slaves. Many Irish were victims of sometimes-violent assimilation and do not remember Celtic language at all. Besides, active resettlement of English and Scottish protestant farmers to Ulster in the northeastern Ireland began. They prevailed over Catholics in quantity in this part of Eire.

In the 19th century Sinn Fйin party was formed. It started fighting for the Irish independency aggressively. England responded with tough politics and armed suppression of all the rebellions. As a resulted a vicious circle of violence appeared. In 1922 the southern part of Ireland received a dominion status (independence with the reservation of the English Queen's power just like in Canada and Australia) and in 1949 the Independent Republic of Ireland was proclaimed. At the same time in 1922 Northern Ireland (Ulster), where two thirds of the population are Protestants and one third consists of Catholics, was excluded from Ireland and became a part of Great Britain.

After Ireland succeeded in becoming independent Sinn Fйin concentrated on the next task – reuniting of the island. The negotiations with the British government were always leading to a deadlock. The British government supported Protestants who did not want to become a minority in Eire. Protestants themselves organized the armed groups and attacked Catholics sometimes committing terror acts. The largest of these groups turned out to be the Orange Order that organizes annual parade devoted to the victory of Protestants over Catholics in 1689. Every time they tried to walk through the Catholic districts they had to face the Catholics' opposition. Protestants responded with violence followed by more terror acts. The situation was becoming more and more critical.

Government could not manage to solve the problem also. The conservative cabinets of Margaret Thatcher and John Major did not want to hear about Sinn Fйin at all and called the party terrorist organization. As a result they got bombings in London and Manchester during Euro 1996. Only in 1998 Tony Blair agreed to begin talks with Sinn Fйin in exchange for stopping the terror. Attracting the Irish authorities also had a great impact. The bombings did not stop at once but they were now preceded by the phone calls to the police. As a result the list of 4000 victims killed in the terror acts became larger. After the London bombings nobody looked for the Irish traces. At last IRA handed over its weapons to the international peace-supporting forces.

Disarmament of the IRA is the first such case in the European history. Until recently neither Basques in Spain nor Corsicans in France could imagine such a thing.  At the same time areas settled by Basques and Corsicans practically do not have population directly supporting the “metropolis”. That is why there was no sense in fighting against powerful British army supported by the protestant majority of Ulster. Besides, Sinn Fйin achieved its main goal – Ireland's independence – 56 years ago, even though only three quarters of the island became independent. Besides, Irish authorities started realizing the impossibility of reuniting the island and pointed at this to both Sinn Fйin and IRA. However, those did not want to listen.

Meantime it is wrong to claim that the question of Ulster's status is removed from the agenda. Its Catholic minority will simply take note of other methods, general Irish citizenship, for instance. There is no guarantee that the violence will stop. Protestants have their own armed groups that can consider the IRA's decision as their victory and become more aggressive. Neither this means that Basque and Botasuna party will follow the IRA's example and will stop fighting for the independence of the Basque Country. There is neither Basque Country nor Corsica on the political map of Europe whereas the Republic of Ireland is marked there.