Russia loses the Balkans to its own advantage 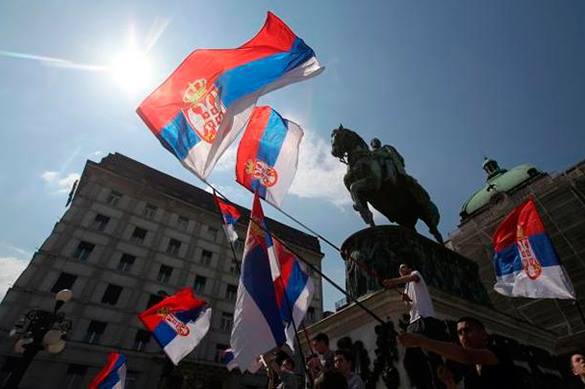 Critics of Moscow's policy in the Balkans point out to two aspects. First off, the Kremlin has refusal to make serious attempts to put obstacles on Montenegro's NATO membership. Secondly, Moscow took no effort to ensure the victory of a pro-Russian candidate during the presidential election in Serbia. To crown it all, the critics accuse Russia of inaction in Greece, Macedonia and Bulgaria.

Strictly speaking, Moscow does show little interest in the Balkans. Protests about Montenegro's entry into the North Atlantic Alliance were sluggish and formal. Russian officials expressed their feeble protest on the subject after Montenegro joined NATO, even though the West accused Russia of plotting a coup in the former Yugoslav republic.

In Serbia, the election of President Vučić, who does not hide his pro-Western stance, did not become a reason for much concerns in the Kremlin either. The head of the Serbian government today is a lady, who enjoys the reputation of a US agent. The new Serbian president also set up a department for the European integration. Yet, Russia did not create any big story out of it.

Bulgaria's new president is a politician who declared a course towards the Russian Federation. However, his coming to power did not become a signal for Moscow to go on a strategic offensive.

Greek Prime Minister Tsipras went to Putin in a hope that Moscow would protect Athens from the financial aggression of Germany, but left with nothing.

The events in Macedonia, where Albanian parties pushed Slavic, Moscow-oriented forces, away from power, did not produce much impression on Moscow either.

These are the facts. They testify to the hypothesis about Russia's strategic retreat from the Balkan region.

Is there an alternative?

An alternative to Russia's current sluggish policy in the Balkans could be Russia's participation in endless, exhausting, unpromising confrontation with the West in a region where the state of affairs has always been extremely confusing, where everyone is at odds against everyone, and where interests of many external players intersect. Of course, memories of the operation that Russian peacekeepers conducted in Pristina in the summer of 1999 are still dear to Russia, but it would be silly to stage another operation like that, albeit in the scale of the whole region.

The Balkans are dubbed as the powder keg of Europe. The complex history of the region has created a political term - 'balkanization,' which designates the collapse of a complex ethno-religious and ethnopolitical mosaic against the backdrop of a multitude of internecine conflicts. The Balkans are going through the process of balkanization themselves, and dealing with this region is highly dangerous and costly.

Does Russia have resources to do this? The answer is no. Russia already has Ukraine and Syria, complicated relations with the West in general. Therefore, the idea to get involved in Balkan problems would be an unnecessary and harmful.

The position of an external observer seems to be a lot more reasonable. Let the EU, the US, the Islamic world try to decide the fate of the Balkans - all those who want to catch a piece of influence in the powder cellar of Europe.

Within the EU, there are several centers of power that have historically been attracted to the Balkans. First of all, it goes about Austria and Germany. Whatever they may say about the European solidarity and the omnipotence of Berlin, Vienna sees the Balkans as its backyard that used to be a part of Austria's territory some 100 years ago. One may assume that Austrian politicians are likely to be attracted to the idea of returning the country's supremacy over a part of the region. Slovenia, for example, could ensure Austria with a gateway to the sea. Interestingly, The Hague Court has recently made a curious decision about the Piran Bay: a part of sea area was cut off from Montenegro (a newly made NATO member) to give this area to Slovenia.

For Germany, control over all the Balkans is an indispensable condition for an effective policy to "discipline" Europe. Suffice it to call the fact that Hitler delayed the attack on the USSR to achieve "tranquility" in Yugoslavia. Germany needs to take the region under total control, otherwise, the game of the German Fourth Reich looks unconvincing.

Another historical contender for domination in the Balkans is Turkey. There is no doubt that Erdogan intends to restore positions of the Ottoman Empire step by step.

In a nutshell, the Balkan region is a hornet's nest, for which several greedy animals are struggling. Anglo-Saxons will try to take advantage of the situation in the Balkans. Britain and the United States will use the situation to manipulate the struggle between  the Germans, the Austrians and the Turks for the Balkans. They do not want peace in the region; Washington and London will make every effort to ensure the "Balkanization" of Europe continues as a neglected crisis is required.