Serbia's Prime Minister Alexander Vučić won the presidential election on Sunday, April 2. According to preliminary estimates, he scored almost 59 percent of the vote. Other ten candidates failed to overcome the 14 percent threshold. 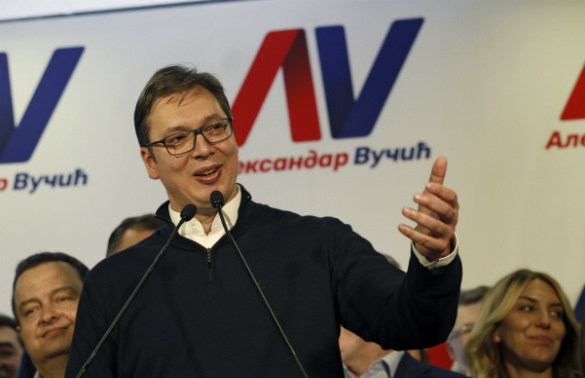 "I have gained 12 percent more votes than all the other candidates combined, I'm grateful to the people. Thank you very much! Long live Serbia!" Vučić said.

He also thanked Russian President Putin and the German Chancellor Merkel for their agreement to meet a few days before the day of silence.

More than 3 million 700 thousand people came to the election in Serbia last Sunday. Vučić noted that he would the new government in the next two months. Answering a question about first steps after taking office, the politician said that he would just continue working.

Pravda.Ru requested an expert opinion from Doctor of Political Science from the Institute for European Studies in Belgrade, Stevan Gayich:

"The presidential election in Serbia has received a great response from people. As many as 30 percent had voted before 2 p.m.. Given the fact that many electors live abroad, the real percentage of the people who have part in the election is much higher."

Since the times of socialist Yugoslavia, Belgrade has been trying to position itself as a neutral state on the international arena. At the same time, after the "Bulldozer revolution" and Slobodan Milosevic's defeat at the presidential election in 2000, Serbian presidents have been trying to stay friends with Russia and join the European Union.