Slovenia is a small Catholic state in the Alps. The Slovenians are very good to the Russians, and the opening of the monument to Russian soldiers who died in two world wars appears to be a logical expression of this attitude. Russian President Putin is paying a visit to Slovenia, but there are many symbolic details about his visit to the European country. 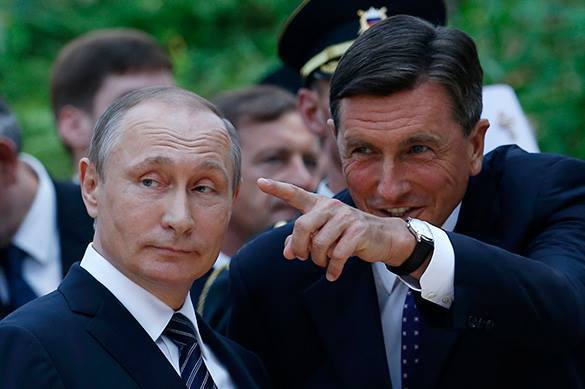 Slovenia seceded from the former Yugoslavia in 1991, then joined NATO and the EU in 2004. Vladimir Putin's visit to the country has not received much coverage in the local media not to attract Washington's attention. it is worthy of note that it was Slovenia that was the first to have pulled out from the former Yugoslav federation. The country is also the last outpost of the Slavic world while moving to the West. The chapel that was built near the Alpine pass of Vršič was built in memory of Russian prisoners of war, who were building the "Russian road" a hundred years ago. Putin also attended the opening of the monument to the "Sons of Russia and the Soviet Union, who died in Slovenia." Interestingly, this monument that was opened in the Slovenian capital of Ljubljana has become the first monument to our warriors in Europe after the collapse of the Soviet Union, which is quite symbolic.

Outwardly, Ljubljana has distanced itself from Moscow and attached great priority to its being as a NATO/EU member. Yet, no one knows what they say on the sidelines. It appears that Slovenia is interested in cooperating with Russia.

Nobody can guarantee a quiet life in Slovenia

No one can guarantee Slovenia a quiet life against the background of Brexit and the bubble of government bonds. it is not ruled out that those who choose to invest in the undervalued Russian economy will be able to survive the impending global financial collapse with less difficulty. Slovenia may become a beneficiary in the reanimated project of the Russian gas pipeline to Europe via Turkey One may also discuss broader integration into the oil and gas industry through oil retail sales. Russian ministers for energy, economy, communications and a representative of Gazprom do not appear to be incidental in the Russian delegation at this point.

According to Italian media, experienced local diplomats appealed to the Ministry for Foreign Affairs of Slovenia with a request to draw up a joint statement that would say that terrorism creates new challenges in the world, so the EU should opt for the cooperation with Russia. The document has not materialized, the parties simply urged each other for peace, but Slovenia does withhold an ambition to be a bridge between Russia and the West.

The Slovenian leadership ought to have more political courage. NATO allies have been strengthening ties with Russia in "sensitive areas" without hiding it from anyone. It goes about such projects as Nord Stream, the cooperation between Italy's Iveco and Russia's KAMAZ for the production of military equipment that is used in operations in Syria. One may continue with the shipment of Russian rocket engines to the USA and the rescue of a Boeing factory in Seattle by a Russian company that bought on lease 18 Boeing-747 aircraft.

The Balkans remain a territory of strategic interest for Russia

Reuters saw Putin's visit to Slovenia as a wish to destroy the unity of the West on sanctions. According to the news agency, Russia's trade with the EU has fallen by almost a half (by 40 percent with Slovenia) because of the sanctions. At the same time, the level of Russian commercial relations with the United States has not seen such a significant decline.

The key point here is the aspiration to gain political weight in the region. Turkey's Erdogan has an eye on the Balkans as well. Serbian experts agree that even the weak president of Turkey may try to solve his internal problems by destabilizing the situation in the Balkans. This region is extremely important to Russia as an outpost of its movement to the Middle East.

Russian diplomats have been active in the region during the recent years. It transpired, for instance, that the head of the Republic of Srpska Milorad Dodik would like to have a Russian military base in the country to prevent the accession of BiH to NATO.

"The cooperation between police services of Republika Srpska and Russia may lead to the establishment of a center for emergency situations, similar to the one that has been created in Serbia," analyst Srđan Šušnica told intermagazin.rs. Russia still views such countries as Montenegro, Macedonia and Bulgaria as her allies. In the region, there are pro-Russian forces that do not agree with the pro-Western course of their governments.

The above-mentioned Serbian center in Nis is now called the Russian-Serbian Humanitarian Center. The center works in three directions: de-mining, disaster management and personnel training. This looks like a prototype of a Russian base in Serbia. The world is changing before our very eyes indeed.

Putin's visit to Ljubljana is not just an act of gratitude and a reminder of the inadmissibility to rewrite history. Russia is switching her geopolitical interests from Ukraine to the Balkans. There is another symbolic fact in this story: Donald Trump's wife is a Slovene. Is is a sign from above?

19:35
German Leopard 2A4 heavy tanks spotted in Ukraine
18:42
Russian large landing ships disappear from naval base in Novorossiysk
18:00
Chechnya thanks the West for the weapons supplied to Ukraine
17:46
Ukraine can skip Membership Action Plan on its way to NATO
17:34
Azovstal militants reveal how many days they can hold out
16:47
Russia and Ukraine reach agreement to evacuate wounded from Azovstal
16:12
Expert says why Kyiv was interested in nuclear weapon before Russian operation started
15:33
Putin at CSTO summit: Russia does not have any issues with Sweden or Finland
14:47
Renault Russia to start producing Moskvich cars
17:39
Belgrade says four countries ready to withdraw recognition of Kosovo
Hotspots and Incidents
Ten Ukrainian military leave Azovstal, declare readiness to negotiate