Putin in Paris: Europe got the message from world's most influential man

Vladimir Putin's visit to France and his talks with his French counterpart Emmanuel Macron is likely to be a lot more important than one may assume at first. It is not excluded that the Franco-Russian summit will become a turning point in the relations between the Russian Federation and the European Union. 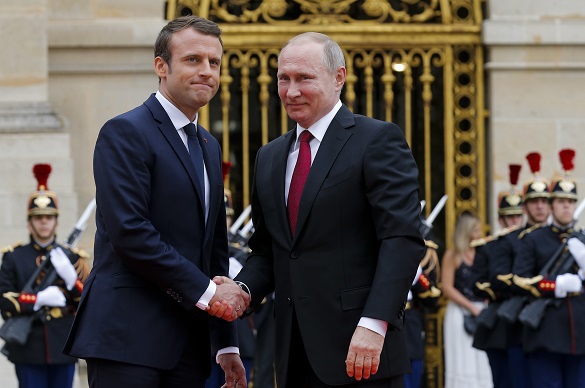 Macron has gained a lot indeed. After a historic handshake with US President Donald Trump and meetings with leaders of the world's strongest countries at the G7 summit in Italy, the newly elected President of France welcomed Vladimir Putin, who has been repeatedly recognised as the world's most influential man.

Macron's talks with Putin were held immediately after the G7 summit, which may suggest that Macron served as a messenger from the Group of Seven, the European part of it. Macron informed Putin about the results of the Sicilian summit, which was not very successful, judging by what many Europeans think.

Emmanuel Macron has thus achieved another goal and became a leading foreign policy player of the EU. This role has long been a cherished dream of Paris since the very beginning of the European project. It should make France a full and irreplaceable partner of Germany, the economic locomotive of Europe. Macron seems to be very close to this now. Interestingly, after the talks with Putin, Macron assured journalists that he was going to inform German Chancellor Angela Merkel about the results of the meeting in Versailles.

What did the meeting mean for Putin?

First, it was about the need to break through the so-called blockade, which the Western world tried to arrange for Russia after the Crimean events. Even after Russia's unification with the Crimea, foreign leaders of the world continued their regular contacts with the Russian president.

Secondly, Putin has made it clear that the Russian vision of the main problems, on which the positions of the Russian Federation and the EU do not coincide, has become a subject of serious and, as they say now, substantive discussion, including in the media. If Macron is ready to listen and discuss the Kremlin's views on Syria or Ukraine, the French and European press will have to follow his example. After all, it was the media that made Macron an idol, Europe's only hope in its confrontation with Eurosceptics headed by Marin Le Pen. The man, who defeated the National Front, the savior of the future of the EU, speaks to Putin in Versailles - this does mean a lot.

One can not help but notice the emerging discord between the EU and the US, which became apparent after Trump's talks with the leadership of the European Union, leaders of NATO countries and the G7 summit. Angela Merkel stated that Europe should relieve itself from dependence on America and take its own destiny in its own hands. Against this background, the move to invite Putin to Paris looks like Europe's first step towards the normalisation of relations with Moscow.

Regaining control over former African colonies is a strategic goal of the EU. Macron's first foreign visit as French President was to Mali. It is equally important (or even much more important) for Europe to regain access to Russia's resources. Yet, the logic of mutual sanctions may lead to serious consequences, such as the closure of export gas pipelines, for example.

This is what President Putin urged the EU for: remove all restrictions for free trade! Without a doubt, the Europeans got the message.