The talks between Russian President Vladimir Putin and his French counterpart Emmanuel Macron finished in Versailles. The leaders of the two countries discussed bilateral issues, as well as international problems - the crises in Syria and Ukraine, the state of affairs in Libya and on the Korean Peninsula, as well as relations between the Russian Federation and the European Union. 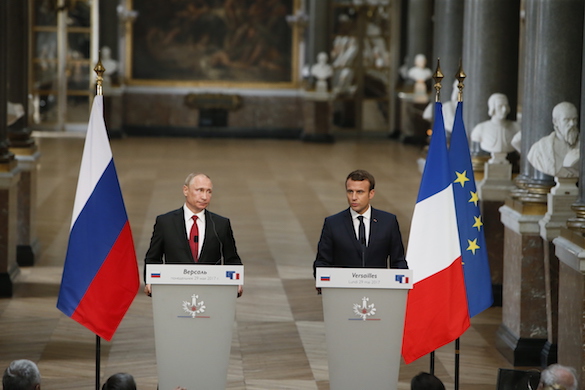 After the talks, Russian President Putin told reporters that he invited France's new President Emmanuel Macron to come to Moscow.

"I also invite Mr. President to Russia, and I hope that he will be able to spend several weeks in Moscow," Putin said.

Following the talks with Russian President Vladimir Putin, the newly elected French leader Emmanuel Macron stated that it would be impossible to work on most important issues without a dialogue with Russia. "As for the bilateral relations, I would like us to continue and intensify these relations," Macron said.

In addition, Macron also said that he and President Putin discussed issues related to sexual minorities in Chechnya and the LGBT community in Russia.

"I very clearly indicated to President Putin what France is expecting on this issue, and we agreed that we would be monitoring the situation together," Macron told reporters after the talks.

As Macron stated, President Putin said several times during the conversation that he had taken measures to find out the truth about what was happening in Chechnya.

The meeting between presidents of Russia and France was held at the residence of French kings in Versailles for the first time in 300 years. For this high honor, European media started calling Putin the "tsar." Headlines similar to "Le Tsar Poutine à Versailles" appeared in a number of French publications.